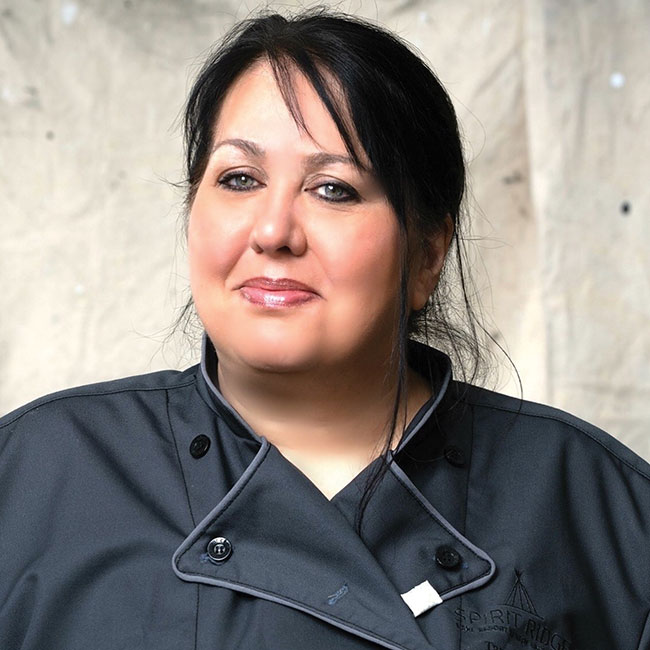 Three talented bakers from across Canada share the stories of their diverse culinary careers. Spanning from start-up bakeries to upscale resort kitchens, we find out what inspires these bakers and the role their heritage plays in their craft.

Tammy Maki, Owner, Raven Rising, Sudbury, ON
Baking has allowed Tammy Maki to find a connection with her two families: one by birth and one by adoption. A Saulteaux Ojibwe Kwe from White Bear First Nation in Saskatchewan, Maki was adopted by a Finnish family in Ontario during the Sixties Scoop, a series of policies that saw thousands of Indigenous children taken from their homes and adopted out to white families from across Canada and the United States beginning in the 1950s.

Maki says one of her earliest memories is of making pulla, a traditional Finnish cardamom bread, with her adopted mother. “I always loved it,” Maki says of baking. “It’s very relaxing.” Maki worked in several different industries, often baking in the evenings and making wedding cakes for friends on the side, before turning to baking as a full-time career after what she jokingly describes as a “midlife crisis.”

After graduating from Cambrian College’s baking program in Sudbury, Maki spent almost a decade working on the pastry teams of various west coast restaurants, including the Fairmont Banff Springs and Rimrock Resort Hotel. Ultimately, Maki says she wanted to strike out on her own. “I decided that it was important to meld who I am as a person with who I am as a pastry chef,” she says.

In recent years, Maki has shifted into pastry consulting and offering custom orders via an online shop. She’s now refocusing her business on a style of baking that has deeper ties to her cultural roots. Rebranded as Raven Rising, her online bakery now specializes in chocolates and pastries made with Indigenous ingredients. “I want to incorporate traditional Indigenous ingredients. Not just regionally, not just Canadian, but on a global Indigenous scale,” she explains. “I want to introduce them and educate people while they eat them so they can understand them better.”

Maki frequently works with ingredients like hand-picked wild rice, bison, as well as various seeds and berries, much of which she sources from other local Indigenous businesses. The result is creations ranging from sea buckthorn chocolates to bison pemmican and all-natural cookies made with fruit, whole wheat flour, and molasses. Maki says that her goal is to blend Indigenous ingredients with classic pastry techniques and flavours. “I want to celebrate my heritage, but I also want to celebrate the other side of who we are as Canadians,” she says.

Lenore Johnson, Owner, LenJo Bakes, Kitchener, ON
Lenore Johnson’s years spent baking abroad are the main source of inspiration for the imaginative pastries she makes at her Kitchener bakery, LenJo Bakes. Johnson says she has always been drawn to baking because of its capacity to open up endless possibilities with just a few simple ingredients. “You’re taking basic ingredients – flour, butter, sugar, eggs – and you can make almost anything,” says Johnson. “If you have those four core things, the sky is really the limit.”

Johnson initially viewed baking as a hobby, but in her third year of a math degree at the University of Waterloo, she realized the career she was working towards would be too demanding to also allow her to follow her passion for baking. “I very quickly realized that with a full-time job, pursuing pastry was probably not going to be possible,” she says. “I decided I wanted to do what made me happy and that was baking”

After graduating from the pastry program at George Brown College in Toronto, Johnson travelled to the U.K. on a working holiday visa and spent several years working as a pastry chef in high-end hotel kitchens. Her next move took her to a winery in New Zealand, where Johnson also started to dip her toes into the world of small business. Working out of a shipping container kitchen space, Johnson began selling custom pastries and cakes via online orders. “It allowed me to flesh out the beginning stages of LenJo Bakes as a business in a real-world environment,” says Johnson. “I realized that I could do this, at least on a small scale.”

An opportunity to return to her alma mater George Brown as an instructor eventually brought Johnson back to Canada, and she also began searching for a permanent home for LenJo Bakes. Eventually she found it in a rundown convenience store in northern Kitchener, which Johnson says both she and her new landlord believed could be transformed into something beautiful.

At LenJo Bakes, which opened in February 2020, Johnson says she enjoys introducing pastries, desserts, and baked goods that are popular in the U.K. and New Zealand to a new Canadian audience. “It’s bringing in these little things that we don’t really have the culture for here in North America but I don’t think it’s for lack of wanting it, I think there just isn’t anybody doing it,” she says. “This idea, which I’ve grown out of nothing, to see it thrive and for people to really catch the vision of what I’m trying to do, I’m really proud of that.” 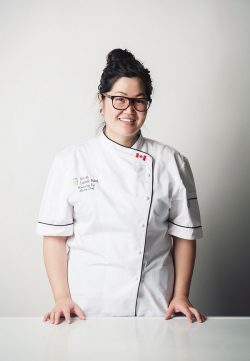 Kimberley Vy, Pastry Chef, Aura Waterfront Restaurant + Patio, Victoria, B.C.
Growing up, pastry chef Kimberely Vy constantly found herself surrounded by food. As a child, Vy says she often accompanied her mother to work in restaurant kitchens. Cooking was also at the heart of her family life at home. “All the women in my family did a ton of cooking, so I was always surrounded by that culture,” says Vy. “We would have get-togethers with the family and big feasts would be served.”

After completing a diploma in baking and pastry arts at Calgary’s Southern Alberta Institute of Technology, Vy worked on the pastry teams at a series of Calgary restaurants and overhauled the pastry program at the Calgary Zoo, before joining Aura Waterfront Restaurant + Patio in Victoria, B.C as pastry chef.

Vy says the opportunity to work with executive chef Takashi Ito was one of her main motivations for making the move to Aura. “It’s a rare luxury to be able to work with somebody as a mentor who is fairly established in the culinary world and who also looks like me,” explains Vy. “It’s refreshing to work with somebody that just gets you on a cultural level.”

The flavours of Vy’s childhood often serve as an inspiration for the sophisticated desserts and pastries she develops at Aura. “We were kind of a big mixed bag culturally,” says Vy of her family, explaining that her parents are both Vietnamese-Chinese and her mom was born in Laos and also lived in Thailand for many years. “Lots of flavours are inspired by Southeast Asian cultures: I like to do a lot of salty-sweet and salty-sour.”

She adds that while European baking tends to incorporate high-end nuts like hazelnuts, almonds, and pistachios, she’ll often opt to work with peanuts instead, which are much more prevalent in Southeast Asian cooking.

As a leader in the kitchen at Aura, Vy aims to combat the sexism and ageism she frequently encountered early in her career. “The way I lead my team is a direct cause of me being in those experiences and doing the opposite,” she says.

“Sometimes, as a person of colour, you can definitely deal with microaggressions,” she says of her previous roles. “A company might not realize what they’re doing could be harmful, so then having to educate them can be challenging. At the same time, I realize there’s value in educating an organization so that it doesn’t happen in the future.”