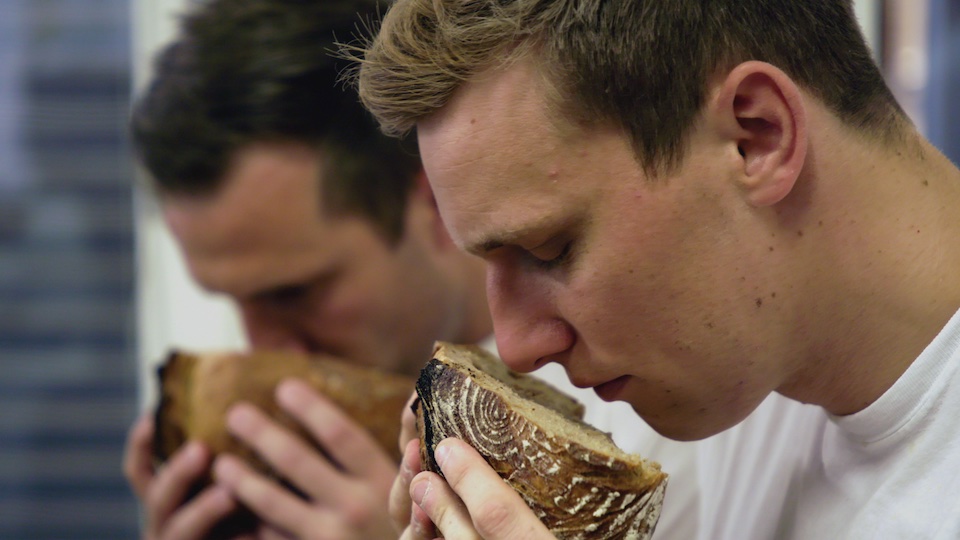 It’s often a guilty pleasure to watch a couple of movies when flying but I had a pleasant surprise when I flew to Toronto last week.

As I was perusing the movie content there was a documentary titled Bread: An Everyday Miracle (Brot – Das Wunder, das wir täglich essen…). At first, I thought that it was going to be about making sourdough at home during the pandemic, but I decided to watch it anyway and expected a generic film shot to appeal to home bakers.

Bread, made by Harold Freidl from Austria, 2020, explores artisan bread production from the perspectives of six active, thoughtful, and successful professionals. Christophe Vasseur owner of the iconic Paris Bakery, Du Pain et des Ideés, Karl de Smedt, ‘the sourdough librarian’ who works for Puratos, Hans-Jochen Holthausen, managing director of the huge Harry Bread (Harry-Brot GmbH), the largest manufacturer of baked goods in Germany, the family of bakers at Öfferl from Gaubitsch in Germany who turned a losing business model around by going 100 per cent organic, and also perspectives from Apollonia Poilâne who runs the famous Poilâne Bakery in Paris and finally a member of the European parliament who is also an organic farmer contributes to the discussion.

Between exotic bakery trade fair visits, sensual aroma samples, diabolical enzyme mixtures and sci-fi production models as well as the bizarre search for the right recipe for bread on Mars, Friedl’s film explains the complex relationships between ecology and work, health and taste or politics and consumption in an exciting way. I especially appreciate the format of the film which just focused on what the participants had to say. It wasn’t a probing interview and there were no judgments implied, allowing the viewer to be educated and form their own opinions.

Whether you are a fan of the small artisan bakery or intrigued by the logistics of baking for the masses this is a thought-provoking film. Wherever we sit on the spectrum of baking, we should all be having these conversations.

You can watch the film as a paid seven-day live stream rental HERE at Blue Ice Docs or if you have a no-zone DVD player order a copy from amazon.de.

Martin Barnett is the executive director of the Baking Association of Canada. This film review appears as part of the BAC Bulletin in the December issue of Bakers Journal. His experiences include running medium-size wholesale and retail bakeries in Victoria, B.C., working for the Fairmont Empress Hotel, serving as chair of the Professional Baking and Pastry Arts program at Vancouver Island University and operating Seraphina’s Oven, a small artisan baking, training and consulting business.