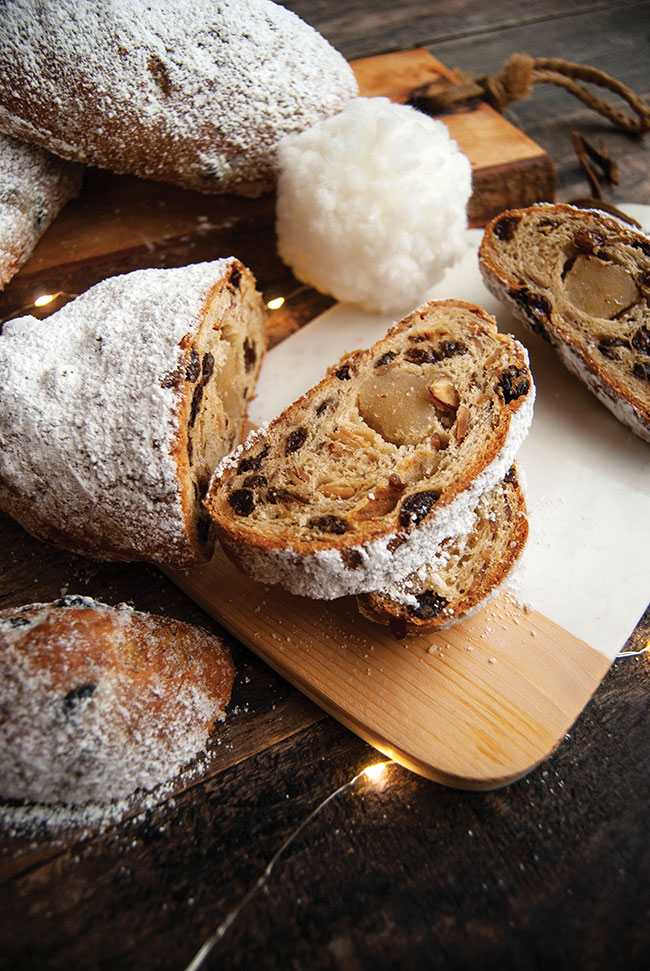 When making stollen, Mary Mackay, owner of Terra Breads, incorporates the spices into the butter, rather than the flour, for a more intense taste. PHOTO: LINDSAY ROYLE FOR TERRA BREADS

December is the time of year bakers and pastry chefs can be our most creative. The process involves months of thinking, reading cookbooks and magazines, watching culinary shows, and sharing ideas, before the planning even begins.

Willow Cakes
Every summer, pastry chef Catherine O’Donnell, owner of Willow Cakes, in the small historic town of Niagara-on-the-Lake, Ont., picks a theme for Christmas. This year the theme is reindeer. The plan? To fill her shop with reindeer cupcakes and cakes, complete with antlers, chocolate reindeer standing two feet tall, chocolate reindeer ornaments and cookies of all kinds. “I love Christmas because we get to play. It isn’t work at all. I try to fill the shop with a lot of variety for everyone. There are traditional items and then some more fun modern items too.”

The pastry chef still uses her grandmother’s recipe for traditional fruitcake. From the time O’Donnell was a teenager, the two spent the weeks leading up to Christmas, in the kitchen. “At Willow Cakes, we start soaking the fruit mix in September, in a mix of brandy and rum. We also make a smaller batch soaked in icewine because we are in Wine Country.” The fruit mix consists of bright red and green cherries, five kinds of raisins, black currants, mixed peel, dried apricots, candied and pineapple. Nuts include almonds, pecans and walnuts. Cakes topped with marzipan are available for purchase by the pound or by the slice.

Christmas pudding is a combination of Guinness, suet and currants, spiced with cinnamon, allspice and mace. It is steamed in a glass bowl, which customers take home, and steam again. The last step is to pour over the scrumptious house-made brandy sauce.

Christmas shortbreads are decorated with royal icing, while most of the gingerbread items are dipped in rich chocolate. “Our gingerbread is gingery, and nicely spiced. The cookies have a softness to them.”

Terra Breads
Mary Mackay, head baker and co-owner of Terra Breads, with four locations in Vancouver, says customers look forward to chocolate cherry panettone: stollen, the traditional German Christmas bread, and Christmas cookies each year. “Our panettone isn’t the traditional Italian panettone. It’s more like a cross between a panettone and a brioche, while maintaining the mushroom shape. We make it fresh every day during the holiday season. We produce around 500 stollen and 750 panettoni, over the eight days leading up to December 24th.”

There is a starter in the base of the dough, but also yeast to give it extra lift. Cherries that have been soaked in vanilla, along with bittersweet Callebaut chocolate, orange and lemon zest, sugar and honey have a delicious flavour. Finally, the crust is topped with cocoa glaze that crinkles and cracks as it bakes.

As for the stollen Mackay says, “First, we soak raisins, toasted sliced almonds, lemon, and orange zest in dark rum and vanilla for two days. We don’t like it to have too much of an alcohol flavour, because we cater to a family crowd.”

For the stollen dough Terra Breads uses the poolish method. The poolish is made by taking a portion of the water, flour and yeast, and mixing it together the day before. This is set aside at room temperature. On the day of baking, first butter, sugar and spices are mixed together. “I like to incorporate the spices into the butter, rather than the flour, for a more intense taste.”

Next, the eggs and milk are added, followed by the rest of the flour, water and yeast. Then, it is left to rise, before it is knocked down, shaped and filled with almond paste. “We roll the stollen in butter and sugar, when it is still slightly warm, and then once cooled we dust with icing sugar,” Mackay says.

Christmas cookies include traditional gingerbread people, with piped royal icing faces and buttons. Shortbread takes on different shapes and flavours. Some contain ground hazelnuts, while others combine ground cashews with cardamom. The cocoa shortbread is rolled into rounds to form thumbprint cookies, with pistachios around the outside and dollops of raspberry jam in the centre. A popular variety of the sugar cookie is made with brown sugar dough, with pistachios and cranberries.

Harden & Huyse Chocolates
Belgian chocolates are a luxury item, and what better to celebrate Christmas with than handmade creations from Harden & Huyse Chocolates, in Saskatoon, Sask. “As a traditional Belgian manufacturer, we have a predominantly moulded selection of chocolates, which makes for many beautiful shapes,” says Claude Hardenne, one of the chocolatiers and owners. “We purchase raw chocolate in solid blocks, melt it down in our tempering machines and create our own fillings in small batches of usually five kilograms or less. Then, we fill each chocolate individually by hand.”

Top sellers include the zoomorphic detailed Horse Head, available in both milk and dark chocolate and filled with a crunchy hazelnut filling. Then, there is the dark chocolate Rhum Barrel, featuring a smooth cream ganache, and a sublime white rum flavour. “Customers will come in and fill an entire gift box, just with one of these chocolates.”

Other popular varieties include the Rembrandt, featuring a shadow box framed image of the great Dutch artist. Like the Horse Head, it has hazelnut filling, but it is smooth, as opposed to crunchy. Then, there are old-fashioned rich flavours like the mousse-filled Milk & Butter, or dark Caramel, both in milk and dark chocolates. The Grenoble is a soft melt-in-your-mouth toffee, while the Grand Marnier is a complex orange-ganache-filled chocolate, housed in an oval cameo.

Peppermint bark, chocolate-covered nougat and hollow chocolate novelties, including Santa Clauses, snowmen, angels and delightful bears, are all the rage over the holidays.

Kids delight in specialized festive chocolate creations including cheerful chocolate Santa lollipops, chocolate gingerbread people and red-nosed reindeer. There are cone-shaped chocolate fir trees, reindeer tablets and Christmas balls to hang on the tree. Inside are rounds filled with praline. The whole family will enjoy the advent calendar, revealing one chocolate for each on the 31 days in December.

Christmas is filled with both nostalgia and new memories in the making. Happy baking!