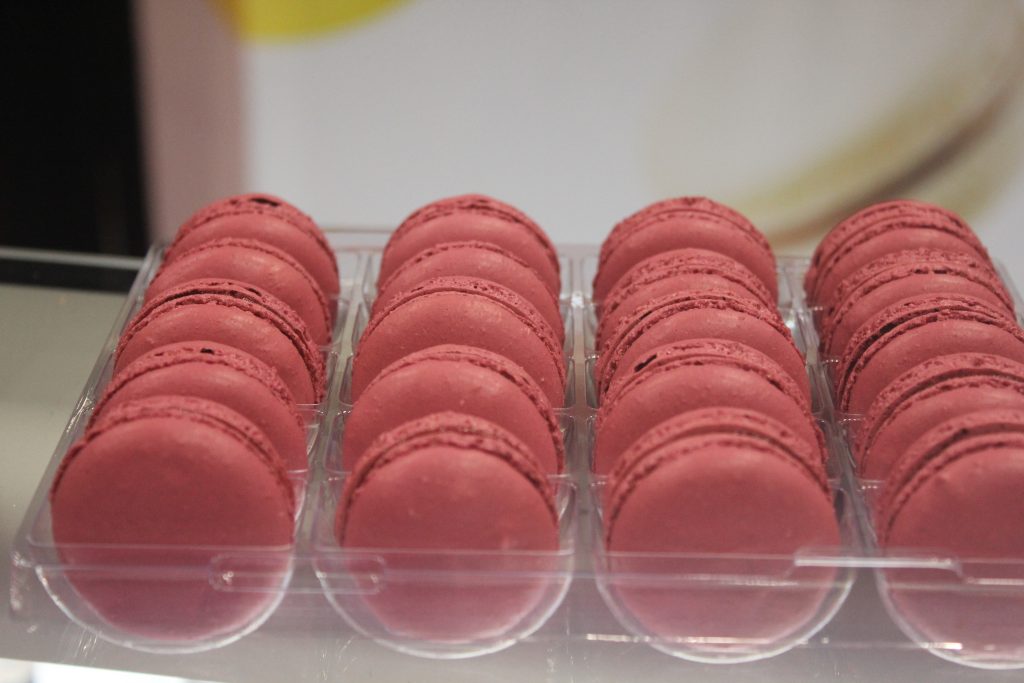 Montreal based macaron maker PointG debuted their tasty cookies for the first time in Ontario.

Restaurants Canada hosted its annual Toronto trade show from Feb. 28 to March 1. The event, which was held at the Enercare Centre, brought together a mix of hospitality professionals for three days of booth visiting, seminars and stage demonstrations. The 71st edition of the show brought in 14,462 attendees. The trade show floor comprised 1,000 exhibits in nine different pavilions and 150 presentations, demos and workshops.

Troy Taylor, this year’s show lead for Restaurants Canada, says the association is working to take the show to the next level by focusing on more interactive exhibits on the show floor.

“There was really quite a shift in vibe, energy and look,” he said of the buzz at the show. “Today’s chefs are young and edgy and that’s why our messaging was Hospitality Unleashed.”

Bakers Journal was on hand March 1 to peruse the booths in search of new ideas and products for the Canadian baker. First stop was a special media presentation at the Bunge booth, where Mike Lund shared what’s new with the nearly 200-year-old global agribusiness. Bunge is focusing on working closely with its growers in a farm-to-table approach. The company aligned with Saskatchewan growers to establish a sustainable canola program. Allergens and non-GMOs are also trends on the company’s radar. Bunge is offering a new Delicia NH [non-hydrogenated] Margarine that has replaced the allergen soy with sunflower lecithin. The company has also developed a new Delicia NH Soya margarine to deliver a lower cost option. Bunge’s clean label line has no preservatives, no soy, no dairy, is non-hydrogenated and vegan. On the issue of non-GMOs, Lund commented that it is still a niche market, but the big brands are watching.

After departing the Bunge booth, the nearby nibbles fronting Callebaut/Cacao Barry tempted Bakers Journal straight there. There is something to be said for a little chocolate in the morning. Callebaut is focusing on their Origin Collection, and its newest member fits in perfectly with the upcoming summer Olympics in Rio de Janeiro. The company’s new single origin from Brazil is a 66.8 per cent cocoa that marries beans from Amazonie and Bahia. In the Cacao Barry line, the company is introducing Explore Haiti, a 65 per cent Origine dark couverture chocolate featuring a mix of 70 per cent Trinitario and 30 per cent Criollo beans harvested in the Grand ‘Anse area.

Palates wetted by an appetizer of chocolate, it was time to search out what’s happening in the hearty bread category. As a general observation, gluten-free has taken a back seat in prominence, when compared to a few years ago, as to what companies are showcasing. Grains, and an authentic, artisan look and feel were more front and centre.

Boulart, a Quebec bakery offering a Non-GMO Project Verified line of breads, buns, baguettes and rolls, was featuring two new products. Boulart’s new thin sandwich bun is designed to cut out some of the bread but still be sturdy for toppings and spreads. The product spec sheet recommends Paninis as its best use. The bread is fully baked and blast frozen. Boulart also rolled out a small artisan burger bun meant to be light and versatile. The burger bun is also fully baked and blast frozen. Along with being Non-GMO Project Verified, Boulart prides itself on using no preservatives, additives or added sugar.

Bakers Journal bumped into a brand new bakery, Café Louise BakeHouse, which is based in and serves the Greater Toronto Area. The 8,000 square foot bakery is producing sourdough breads made only with flour, water, salt and yeast (before inclusions). Some of the breads include Italian Olive, French Country, Hummus & Potatoes, and Multigrain. The bakery is offering custom shapes and sizes to its customers, ranging from dinner rolls to five kilogram loaves. The bakery is also making a variety of croissants and other pastries.

Première Moisson, a Quebec based commercial operation focused on artisanal baking, was introducing three new kinds of Panini bread done in 14 slice loaves that have a four day shelf life. The company was also showcasing a new multigrain ciabatta cluster that come 45 to a case and are designed to be a good fit for the bread basket or alongside soup.

Bakers Journal also stopped by Fred’s Bread to see what’s new and popular, which are breadsticks and brioche. The brioche comes in three flavours: cinnamon, regular and chocolate. Fred’s Bread started in 1994, and using traditional baking techniques, its own homegrown sourdough starter, and 100 per cent natural ingredients for its hearth-baked breads.

In a last but not least salute to the prominence of grains at this show, Bakers Journal discovered Against the Grain. This eastern Ontario farm is now selling purple corn flour and meal, as well as beta-glucan barley flour and berries. Both crops are non-GMO and have been in development for over a decade. Purple corn touts twice the antioxidants of blueberries. The barley is a wheat-free, whole grain with an approved Canadian health claim. Against the Grain’s company premise is naturally fortified food.

Rose Hill Foods presented the media with a selection of bites to showcase some of their sauces and seasonings. The Montreal based company is the blenders behind the original development of Montreal Steak Spice. Representatives at the company talked about the rise of international flavours as a trend. The chefs served up brown gravy and poutine gravy, both meeting plenty variations of “yum” amongst the journalists.

A Quebec macaron maker has landed in Ontario. PointG, based in Montreal, offers 21 flavours of macaron tidily packaged in vessels meant for easy display. The bakery offers all the traditional flavours, plus a few exotics such a poppy flower and raspberry-litchi.

Rivi’s Guilt-Free Cookies, a former Bakers Journal Innovator of the Year award winner, had all of its usual and delightful fat-free/no added-fat cookies and granola on display, plus a new offering. The company has created single-serve snack packs of granola offers 6 grams of pea protein. The packs are also dairy-free, nut-free, vegan and are free from artificial additives.

The Restaurants Canada Show will return to Toronto in 2017.