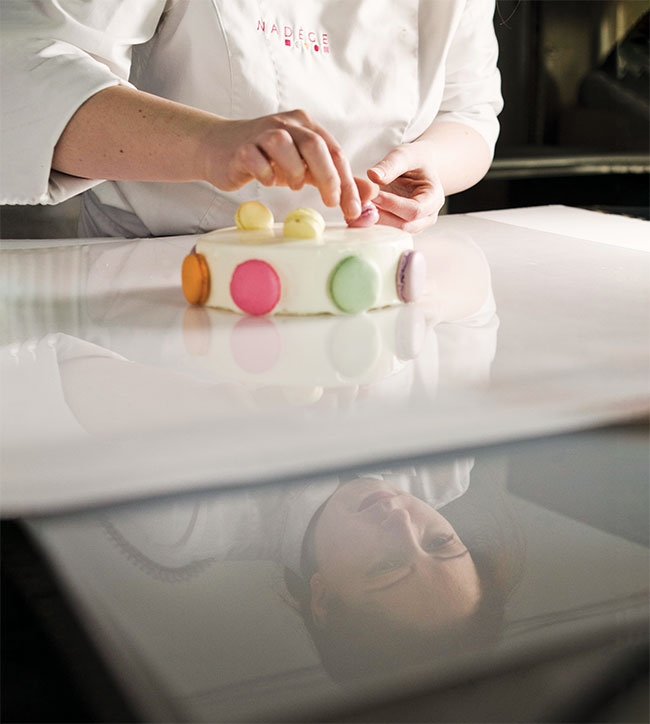 Bold colours, traditional French pastry and a commitment to “be herself,” are keys to Nadège’s success. “Be yourself,” says Chef Nadège Nourian. “A brand needs to have its own identity.”

When Chef Nadège Nourian first came to Toronto, macarons weren’t near as popular in the city as they were in her original home of Paris, France. Now calling her Queen West neighbourhood her home, she not only made her flagship shop the go-to destination for authentic French pastry, but she has since changed the pastry landscape in Toronto, as well.

Chef Nourian, known in the pastry circles as simply “Nadège,” came from parents who ran a restaurant, and her grandparents were themselves pastry chefs. Customer service is in her blood; her smile lights up as she talks about her craft, and the importance of making her clients feel at home. Her shop doesn’t have Wi-Fi as a deliberate choice to ensure her guests talk amongst themselves. “I love watching friends meet, talk and treat themselves.”

The Nadège chain has an empathetic approach to pastry. “It breaks my heart when a kid with allergies is drawn to the cakes, but can’t eat them,” Nourian says.As a result, many of her pastries are gluten-free, and she is accommodating to most food allergies. It’s less about trend setting for her, than it is about making sure her customers feel that this is a home-away-from-home, where they can feel comfortable.

She knows that riding trends is a risky business for any pastry chef. There’s the risk of the trend dying out, or simply not taking root in the first place. Her approach was to go back to her roots and bring back traditional French pastry – with her signature colourful flair. It may have been intimidating for some chefs to start, but Nourian is a third-generation chef, and worked as a pastry chef in London, England, before starting her pastry chain in Canada. Her French heritage and identity as a French pastry expert is what shaped the stores into the colourful chain you see in throughout the GTA today.

“People need to get the right identity, she says. “I think a lot of people nowadays try to copy or get inspired …like, when I did Nadège, it was me. It was my design, it was the colour I loved, the design I loved. I wasn’t trying to be someone else. I was trying to be “me.”

Nourian suggests that pastry shops need to reflect deeply on their image before they open a shop, or design a line of pastry. “They have to think about it, and be real. Also, they need to have technique. A lot of people now, they have one or two years of school and they’ve just opened [their bakery.] Before I opened up my own place I was a chef in London, England. You need to give yourself time…it’s like sports or music. You cannot after just two years of playing piano become the world’s best pianist. It takes a large amount of work, it takes a lot of technique. I think you need a lot of time to understand it and to practice, and practice and practice. That’s my motto: Be yourself, don’t rush, and just learn!

Bold colours, traditional French pastry and a commitment to “be herself,” are keys to Nadège’s success. “Be yourself,” says Chef Nadège Nourian. “A brand needs to have its own identity.”

Nadège’s playful nature is revealed when Nourian talks about the design of her chocolates, and more seasonally, her yule logs.

“Holiday logs are a big deal, here because we are French. In France, everybody has the log for the holidays. Over the years, more and more people are getting involved with that tradition – which is great – and we have four different flavours, though the house favourite is A Classic Affair, “because you have to have to have a classic one! It’s a lot of different layers, top-notch chocolate, real vanilla bean, which is critical with the price of vanilla, but we’re still using fresh vanilla beans.”

Despite the climbing prices of authentic vanilla beans, Nourian refuses to skimp on ingredients. The bakery shares its respect for traditional cakes while showing love to her adoptive country. Her yule log named “Mistletoe” veers from the tried-and-true chocolate and vanilla cake, and has Canadian flavours such as maple mousse and cranberries in a daring more regional flavour.

“Whenever we do something, it has a lot of layers on it…there’s a lot of days of building up a cake. And we have one called “Eternal Spring.” It’s pink, with fresh flowers and a few macarons on it.” While the Nadège chain is cited as arguably being one of the frontier-makers who brought macarons to Toronto, she will not rest on her laurels.

Chef Nourian’s curiosity regarding her customers’ flavour preferences and her keen eye for food trends compelled her to introduce artisanal ice cream to Nadège’s line of treats.

“We found the most popular flavour this summer were vanilla, caramel and cookies: We’re making a caramel crunch, so we do that with a meringue on top, and chocolate biscuits.” From hand-held travel cakes to ice cream cones, one could say Nadège has a handle on the personal indulgent sized treats.