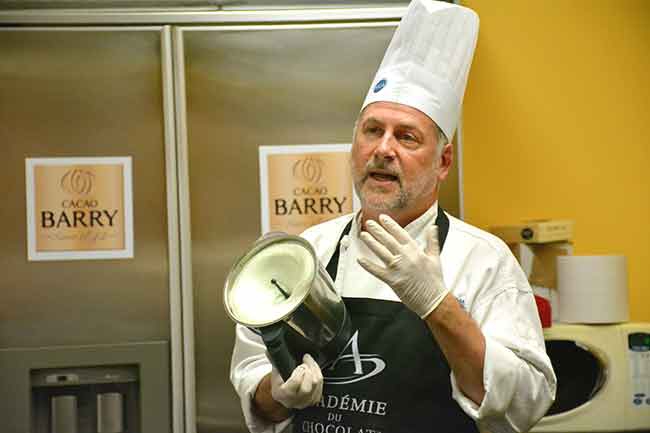 Chef John Placko’s eggless mint meringue is so delicate it will dissolve if brought into contact with fats. Photos: Colleen Cross

In June, the Canadian Pastry Chefs Guild partnered with Cacao Barry and the college to present three interpretations of “Modern Techniques for Chocolate, Pastry and Dessert.”

Chef John Placko, culinary director of the Modern Culinary Academy, showed a roomful of novice chefs how to use molecular cuisine principles to infuse their creations with subtle, consistent flavours.

Placko established the academy in 2012 to teach chefs, pastry chefs and foodies about the innovative cooking and baking method that encompasses scientific techniques, high-tech equipment and new ingredients.

The chef performed a little magic by turning Cacao Barry Ocoa chocolate into crumbs he called “chocolate snow” or “chocolate soil.” To do this, he used maltodextrin, an additive he said absorbs oils.

Placko then made a chocolate micro sponge, which can be made using either sweet or savoury ingredients. Using a whisk or any other mixing method will work, he said, as long as you strain the mixture through a fine sieve. He used a paper cup to shape the sponge and recommended you use as porous a cup as much as possible and avoid using a plastic one, which will fall after rising. Ideally, in 45 seconds, the half-cup will rise to a full cup.

Using a sous vide machine he cooked rhubarb at 80 per cent power. “This is a neat way to infuse flavour,” he said. The machine cooks food very slowly, which helps regulate temperature and prevent overcooking. In this case, the rhubarb cooks in its own juices but also takes on flavours of what’s cooked inside the machine with it, he said.

The audience was particularly curious when he mixed into the juice a handy starch product called “ultra-sperse” that is useful for thickening mixtures such as gravies, puddings and creams and creating a creamy mouthfeel.

One element of Placko’s dessert plate was an eggless mint meringue made using a whipping blade. In answer to a question from the audience, he said you can use fruit juice as the liquid but don’t use fats or oils; and too much alcohol impedes the process. It’s a delicate meringue that will dissolve if brought into contact with fats.

Raspberries he had separated by dipping in liquid nitrogen were deemed too cold to incorporate, so Placko put them into the freezer to warm up. He shared the warmed-up raspberries with fellow chef Royce Li, and the two amused the audience with their icy, visible breath.

Chef John Placko’s eggless mint meringue is so delicate it will dissolve if brought into contact with fats.

Li, a George Brown professor and World Chocolate Masters finalist, followed up with a demo of his own and shared his thoughts about modern techniques.

3D moulds are the future and can help bakers create edible moulds in every size and shape imaginable, Li said. He said he uses these tools to achieve consistent measurements and a high level of uniformity in competitions.

Li delighted the audience by making a comfort-food favourite. With the help of an assistant, he used wood chips in a smoke machine to flavour a chocolate ganache for an authentically smokey-tasting smore bonbon with an edible – and flammable – wick of vermicelli.

Chef Rodney Alleguede of Ma Maison in Etobicoke said that to him modern baking means finding a new twist on the traditional. “In the world of pastry, sometimes it’s about going back to the essentials and making it taste as good as it can,” he said.

Alleguede made a choux paste using a traditional ganache consisting of cream, coconut and coconut puree with no sugar added. He used a 150-degree convection oven for between 45 minutes and an hour. The choux paste is temperamental, he cautioned.

With ganache, the secret is to get twice the volume by adding a high percentage of chocolate, he said. He used pineapple, passion fruit, cream and Cacao Barry Alunga chocolate for the ganache. Using 90 per cent chocolate to one per cent cream gives it “a nice feel,” he said. He said that using cornstarch ensures you don’t need to add sugar to the pineapple.

Guild auditor Wolf von Brisinski encouraged everyone to get involved by becoming members, recruiting members or finding locations for meetings.

“We’re only as strong as our weakest link,” von Brisinski said.

“We plan to have fewer but bigger meetings,” said Al Criminisi, the guild’s president, adding that members will have access to the evening’s recipes on the Canadian Pastry Chefs Guild website.