How one wholesaler came to build a tower 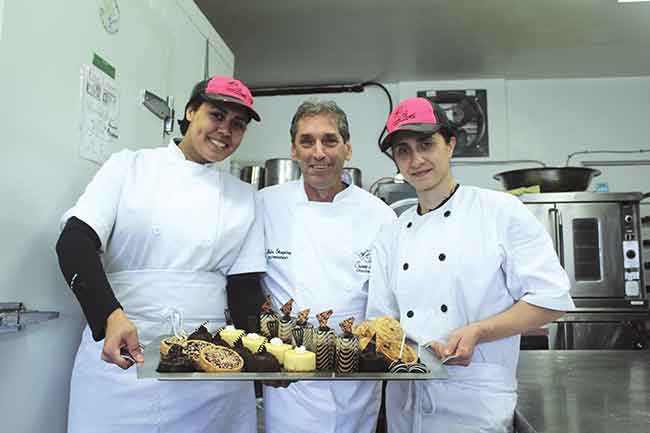 Mike Shapiro and his “angels,” Piera Alduino and Alexandra Modeste, who handle quantity and quality control for the busy wholesale operation.

The CN Tower was busier than I expected during a family excursion there this summer. Goodness knows why I didn’t expect one of the world’s tallest freestanding structures to be a madhouse. There was a snaking line-up to get in, full elevators, and a buzzing crowd at all the look-out towers. At one point I peered into the restaurant and wondered what the food was like. How nice it would have been to have a meal, but eating that day wasn’t in the cards. Some other time, I thought to myself.

When Mike Shapiro of Sweet Angel Chocolate left me a voicemail, I returned the call to learn that he supplies certain desserts for the CN Tower, where executive chef and food and beverage manager Peter George looks after the overall day-to-day operations. Our summer ride up to the sky came to mind, and I was intrigued to cross the path of the business supplying the sweet side of such a busy tourist magnet.

I set up a time to visit Shapiro’s shop just outside Toronto in Mississauga. It is the antithesis of its largest, towering client. Situated on a nondescript stretch of Lakeshore Road, in a small plaza with eclectic neighbours, Sweet Angel Chocolates’ 700 square foot home could easily be passed by. This is not so bad for Shapiro, who does very little retail and does not seem to intend to do more. He keeps a small showcase out front with desserts just for display, and brings out the real stuff from the freezer when a retail client does come in. The rest of the 700 square foot operation is reminiscent of a coziness cocooned in one’s home kitchen. A narrow table at the front gives Shapiro a place to sit and do business. The walls of the front are surrounded by pieces of him: pictures of his lovely second wife, a Bulgarian named Assya, Shapiro with friends, humour pages and plaqued articles. One can ascertain he supports causes for young girls, and when asked why that cause is dear to his heart, the answer is in a graduate photo of a beautiful young woman named Michelle. She is Shapiro’s daughter, who died unexpectedly at the age of 25.

“It still hurts,” he says, “but life goes on.” He does not say this last statement in any manner of glib, but as if to move the conversation back to a place that will not cause emotional derailment.

Michelle, who he refers to as his angel, enjoyed desserts, and Sweet Angel Chocolate is a tribute to his loss as much as it was a way forward for his life. He did not start out in the baking business that has brought a nice pace and luck to his life, but more in a kitchen that might be like the one found in the CN Tower.

In 1979, he was a George Brown student and chef apprentice at the Regal Constellation Hotel on the airport strip. At that time, the now demolished hotel was a hip, luxury super-happening spot. It was the spot to do apprenticeships under the eye of Josef Vonlanthen, shares Shapiro. His student peer and friend Mark McEwan also trained and worked alongside him.

After the apprenticeship, Shapiro was offered the chance to stay on as sous chef, which he did for three years before leaving to open the Sheraton Hamilton hotel. He stayed there for 15 years as executive chef, cooking for guests and celebrities that came and went, all the while putting in 60 to 80 hour weeks that were hard on his wife, son and daughter.

“In the beginning you figure that’s fine,” Shapiro says. “But after 15 years things wear off.”

The general manager of the hotel left to open his own pastry company, and Shapiro joined him in the role of pastry sales, which he did for 10 years, but in his 15 years in kitchens he had never actually been a pastry chef. Through sales, he acquired a feel for what a good dessert should look and taste like. In 2004, the CN Tower approached the company Shapiro was working for and he was asked to make a dessert for them. He created a chocolate mousse tower, which he says is now the landmark’s signature dessert.

Eventually Shapiro moved to a different pastry company, and the chocolate towers contract went with him. In February 2010, he went into business for himself and the CN Tower stayed with him as a client. Shapiro focused on the wholesale side of his business, and now has about 30 clients he serves. He also supplies for the Mississauga Convention Centre, Sheraton Parkway hotel, Lionhead Golf & Country Club, Clarkson Pumphouse & Patio and several other area golf courses, restaurants and bars.

The duo manage production for Sweet Angel, with Alduino being chiefly responsible for meeting quantity and Modeste being in charge of quality.

“They’re called the angels,” Shapiro says with a twinkling smile and a laugh as he teases them lightly about being shy. The girls look up from their work briefly, with shy smiles indeed, but I can see why they keep their heads down. It’s a busy operation, with a big whiteboard on the freezer indicating what needs to be made and what’s the priority. The team churns out about 250,000 desserts annually, and does it all on darn near bankers’ hours.

“We work Monday to Friday, with weekends off. Sometimes we go out for lunch. No nights, no weekends and Christmas we are off for two weeks,” says Shapiro, although he hangs around in case something comes up, as business owners tend to do.

Shapiro’s products are made fresh, blast frozen, and packed in cases of 100 or 42. He likes to keep things streamlined and manageable. He has a short and sweet product list, with 10 core popular items, including the chocolate tower. He also does a flourless chocolate lava cake and flourless cheesecake that are currently popular. The rest of his repertoire consists of various tarts, lollipops and truffles. All of his desserts are individual. He says there are enough players in the full-size cake game that he doesn’t see his operation as competitive there.

“Get a product and make it the best you can,” he advises. “Do five or 10 items and do them well. Keep it that way…I have to watch how much I can do. This is enough – this is plenty.”

He uses good quality chocolate and butter, with the price of ingredients being one of the bigger challenges he’s faced as a bakery. He tries to increase his prices by five per cent a year to offset increased ingredient costs, but he says you can only do so much.

Shapiro is taking much deserved time to relax in his life, spending weekends in Port Dover, Ont., with his wife, who is retiring in June and coming to help him at Sweet Angel. They are taking time to travel to Thailand and Bulgaria. He’s found that a wholesale business makes it easier to plan production, as orders are mostly done in advance. He likes that once an item of his is on a menu, if it’s popular it will stay and this ensures repeat business. But the best thing about working for yourself?

“You don’t have to answer to nobody,” he says with a gleam.

It’s a different pace than his life as an executive chef, but he’s come to appreciate the similarities in the kitchen.