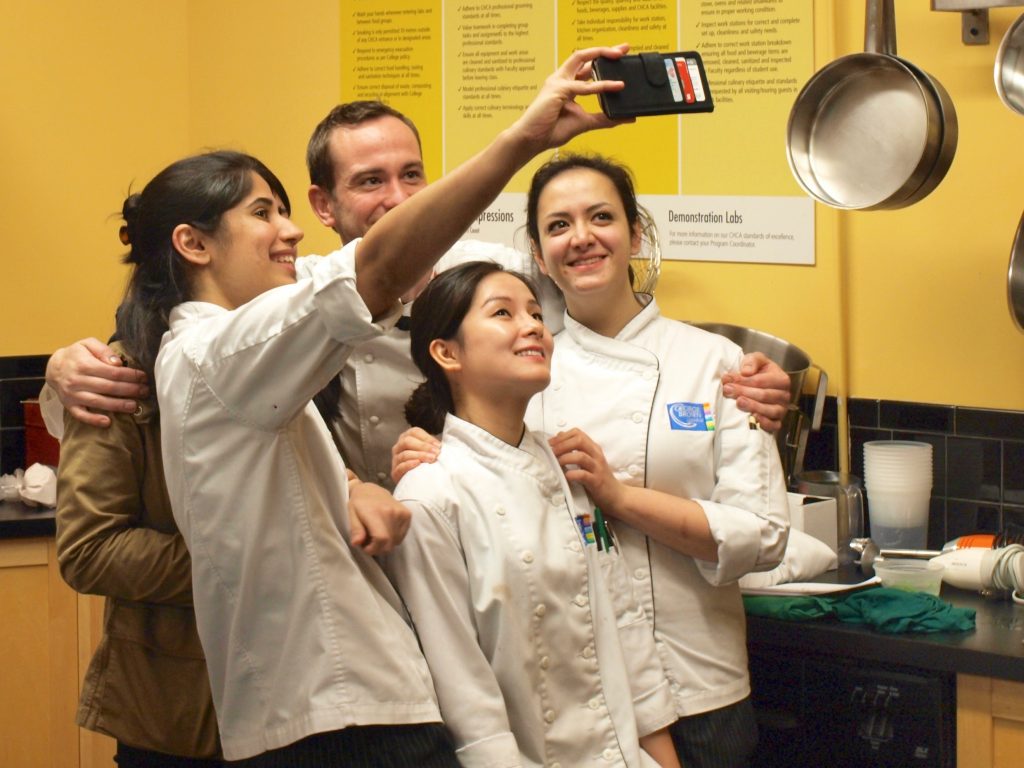 Belgian pastry chef Mathieu Dierinck, a technical advisor to the Callebaut Chocolate Academy in Wieze, Belgium, made a stop at George Brown College in Toronto in late October to provide to demonstration to a crowd of industry professionals and students.

A very engaging presentor, Dierinck walked the audience through three desserts including a tarte au chocolat, a modern take on the cupcake and a decadent snacking patisserie.

While going through the recipes he was often sharing time saving tips. “You may have noticed. I don’t like waste,” said Dierinck. For example, he insists it’s a waste of time to melt chocolate on its own before adding a hot cream/milk liquid when making a ganache. The hot liquid will melt the chocolate. “You will get a good final product with less energy,” he says.

Dierinck’s multi-layer tarte was built on a chocolate shortbread and hazelnut crust, with a chocolate caramel, chocolate genoise (sponge), chocolate cremeux, and a chocolate chibouste (a cream with meringue mixed in) all topped with caramelized nibs powder and pieces of chocolate sponge cake.

The cupcake 2.0, what Dierinck described as more European than North American, was built on a cake batter that included ground almonds. Baked into the cupcake was a bake-proof jelly (raspberry), and it was topped with chantilly with white chocolate and raspberry puree.

Finishing touches included a fresh raspberry and a pipette filled with raspberry coulis. Tip: when topping off with the fresh raspberries, place them hole up and fill the centers with a little coulis; it looks nice and you get a burst of flavour when you eat the berry.

The final treat was a bar made with a hazelnut sponge as a base, then topped with a layer of chocolate ganache with shaved tonka bean (tonka, a vanilla-like flavouring, is illegal in some countries) and a salted butter caramel. Halved hazelnuts are placed on top and then it’s enrobed in a milk chocolate glaze.

The recipes all used a Callebaut chocolate, and samples were made available for all of the attendees.

Dierinck traveled to Montreal’s Chocolate Academy after his Toronto visit to lead a two-day pastry course.