Features Profiles
Making the Best of the Old with the New 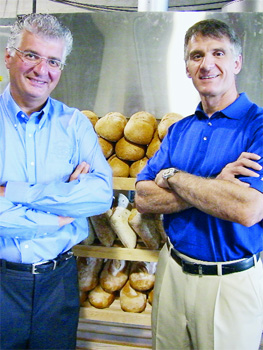 It all began in 1998. Dennis Rossetti, a food scientist who had previously worked with the likes of Canada Bread and Pizza Hut, was living in Battle Creek, Michigan, working in product development for Kellogg’s, when he got a call from his brother, John Rossetti. At the time, John was an independent chartered accountant and financial consultant, working for a number of Toronto-based businesses. That included a 25,000-square-foot artisan bakery named Italian Home Bakery (IHB).

The bakery’s roots stretch back to 1955, in Toronto’s Little Italy neighbourhood, when five business partners launched a business whose primary focus was delivering bread to local homes. The bakery continued to grow, eventually reshaping its focus on supplying wholesale accounts (grocery stores and restaurants), moving into the 25,000-square-foot facility.

Flash forward to 1998
The company’s partners were looking to retire. John and Dennis were itching to take on their own venture. With Dennis’ bakery background and John’s financial credentials, the Italian Home Bakery seemed like the right fit. But it was also more than that.

“I’ve been in bakeries and baking all of my working life,” says Dennis. “It comes down to knowing what your calling is and surrendering yourself to it and saying to yourself, ‘this is what you’re meant to do.’”

And so the two did what they were meant to do. Along with a few business partners, who have since stepped back from the business, they bought IHB.

Dennis, the company’s president, handles the operations and production side of things, with John, IHB’s vice-president, looking after marketing, sales and the financial aspects of running it. Another brother, Joseph, works as the plant supervisor and brother-in-law, Rick, was brought in as IHB’s supervisor of shipping.

From the get-go, these brothers have had big plans and big dreams of what IHB could be.

“You have to look at what you can do in the future and say, ‘this is what the company can be.’ It has to do with being visionary,” says Dennis. “We thought we could be doing something more.”

“Standing still is the road to perdition,” adds John. “You can be on the right tracks standing still and still get run over.”
They’ve made sure the business  has not stood still, although they moved in slow motion for a short period after first taking over the business — to really get a handle on how things were run, how things could change, and how the company should grow.

IHB was “marginally automated” at the time, says Dennis, so much time was spent looking at how to automate the process without affecting the quality of the artisanal products (European breads such as calabrese, ciabatta, French bread, crusty rolls) the bakery’s customers have grown to love and expect.

John and Dennis decided if the bakery was going to grow, it needed more space in which to do so. In 2001, they found a new location close to the 401, the 409 and the Lester B. Pearson Airport. After two years of retrofitting the 70,000-square-foot space, setting it up to meet HACCP requirements (to be introduced early next year) and other food safety programs, and researching and purchasing the desired pieces of equipment (including a huge tunnel oven built to IHB’s specifications — precisely for automating and ramping up its artisanal baking process), the building was finally ready for production in November 2003. It runs on a 24-hour production schedule.

“One third of the key people are still with the business,” says Dennis. “Continuity is important; it passes on a sense of tradition and a sense of loyalty.”

The new building houses 120 employees, along with 35 drivers, who come and prepare their trucks for the routes that take them to restaurants, sub and sandwich shops, and grocery stores all over Ontario, from Fort Erie to Orangeville and Peterborough.
While prepping the new facility, the Rossetti’s primary focus was on automating the process while still continuing to make real, artisan bread. I asked Dennis if the breads can still be considered artisan when the human hand has essentially been taken out of the process (although some of the breads are still shaped, scored and loaded into the oven by hand).

“You have to respect the stages of artisan baking and time is the biggest factor,” he responds. “In an automated process, often time is cut out. As long as time is applied, how you get there is inconsequential. You look at the human process and apply it to equipment. As long as the steps are respected, it doesn’t matter how it’s done, whether you’re rolling it by hand or sheeting it.”
While automating the artisan process was the one of the larger challenges for the Rossettis, there were other challenges, including having employees accept that some of their working methods would need to change with the automation.

He also says a change in management style and how the company was run has been crucial in helping the business to grow.
“When we took over the business, there wasn’t a management infrastructure in place. The owners were still working in the bakery, and you get to the point where it becomes prohibitive in terms of growing the business.”
Forming the right management team is an ongoing challenge.

“The toughest thing is finding management,” says Dennis. “The level of expertise in the business is waning, and not that many people are getting into it, so that’s still tricky.”

The bakery has been Kosher-certified for a couple of years, a move which has resulted in growth, not only with Jewish customers, but also with the local Muslim community and with those who perceive Kosher food products as healthier to eat.
“We thought it was the right thing to do,” says John. “There was a need and you fill that need. It’s being ahead of the curve. Sometimes the stuff they don’t teach you in business school you do because it feels right.”

“Stuff” like working with George Brown College students  (to encourage the growth of the industry and give them experience in a production atmosphere), and contributing to a number of local and national charities.

“In all these things,” says John, “we appreciate the fact that we’re not just a commercial business, but we’re also a community enterprise.”

In the same vein, Italian Home Bakery participates in the annual Good Food Festival, a consumer food show based in Toronto which features familiar “foodies” from Canadian Living and the Food Network, along with cooking demonstrations  and exhibits by local companies. This year, IHB’s new Whole Grain Country French Bread was voted “Favourite Bread” in the festival’s People’s Pick Awards.

As to the future? Improving production efficiency (up to 33 per cent, says Dennis) to increase output is on the agenda. As is working on implementing frozen dough products to reach a wider market. But, as always, the focus is on the quality of the bread — its integrity — says Dennis.

“We’re undertaking a frozen project, but it’s an expensive venture. If you’re going to do something right, it does cost a little more. But if you can’t produce a product without compromising its integrity, then you shouldn’t do it.”