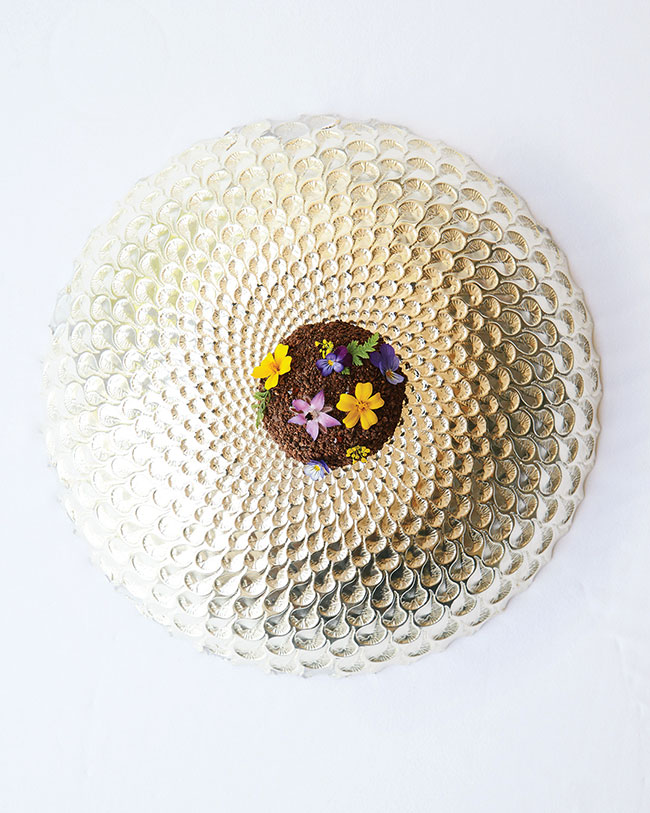 The Hazelnut Bombe is the belle of the ball for New Year’s Eve and other gala events;

It’s a special event, “the big night.” The venue and menu are equally important. But for pastry chefs, it’s all about the desserts.

“My motto is, we can always make it happen,” says Kevin Yang, pastry chef at River Café, a much-lauded restaurant, in Calgary, Alberta. What makes this venue special is that it sits in the middle of Prince’s Island Park, which is indeed located on an island, between two rivers. It’s connected to the mainland by a small footbridge.

“The rivers have always been known for fly fishing and the restaurant is actually housed in a beautiful old cabin,” says Yang. It makes a bucolic setting for special events, in every season.

And then, of course, there are Yang’s creations. Dessert tables reign supreme and it is all about truffles, shortbread cookies, macaroons and fruit bars.

An extensive garden on the property provides edible flowers, berries and herbs.

“We are known for using hyper local ingredients so it can take quite a lot of work to achieve this,” says Yang, who clearly loves all the details. The only exception to the rule is coffee and chocolate, which are not grown in Canada, but Yang adds, “You can’t run a restaurant without them.”

Truffles get the seasonal treatment. In the fall pumpkin is likely to dominate. The orbs of chocolate are rolled in the pumpkin’s own roasted and crushed seeds for added crunch.

Yang likes to flavour macarons and shortbread with bergamot, the herb found in Earl Gray tea or sumac for its tangy flavour.

He also loves marigold, “It smells like orange and tastes like sour.” These qualities are especially valuable. Citrus is such an important flavour on a pastry menu, yet citrus fruits are not grown locally, so these are off limits at River Café.

For food colourings Yang makes his own. “I take local beets, then candy them and later dehydrate, before blitzing into a powder. When I use beet powder in macaroons the result is a vibrant baby pink,” he says. Yang notes he also uses beet powder to colour the buttercream that is sandwiched between the macarons.

And then there are countless fruit bars, especially of the berry variety, in summertime. Crumble bases are made by dehydrating left over in-house made, sour dough bread. This is pulsed into a flour, then combined with butter, sugar and salt from Vancouver Island. The crumble supports the fruit that is baked into a rich custard.

In the fall, pumpkin also appears in the form of bars. But butternut or kabocha squash are equally inviting, so too are varieties of plums or Concord grapes.

And for brides who choose River Café as a venue, there is the added enticement of Yang’s one of a kind wedding cakes. “I like to use lots of piping techniques, texture and shadows, keeping in mind seasonal and local. I also like crunch in-between the cake layers, like chocolate crumb or milk crumb,” says Yang.

Wintertime doesn’t have to mean a dearth of seasonal flavouring.

And then there are plated desserts with a holiday flare. “I like to make desserts based on spruce and quince,” says Yang. “I burn the spruce first, then throw it into milk and let it soak for 24 hours. It creates a smoky resin and slightly citrusy milk. I turn the liquid into a glaze to pour over the chocolate cake, with quince ganache.”

For special events that involve a night away, there is Langdon Hall Country House Hotel & Spa, situated inside a Carolinian wooded forest setting, in Cambridge, Ontario. It first opened in 1989 and in recognition of superior standards was awarded membership in the prestigious Relais & Chateaux affiliation, in 1991. Over the years the property saw an expansion in the dining room and in 2016, a new wing was constructed, with a new event space.

“We try to make events festive by showcasing what is unique to our property,” says Rachel Nicholson, pastry chef at Langdon Hall. “Then we elaborate and expand our limits.”

The vegetable garden is maintained by Mario Muniz, head gardener, who works very closely with the chef team to plant a wide variety of produce that can be featured in menus.

As for the ever- popular dessert table, tarts may contain gooseberries or currants from the garden. Macarons may contain marigolds. The maple bouchons are flavoured with maple syrup from Langdon Hall’s own maple bush, or with brown butter garden-grown sage. Truffles get the herbed effect with freshly plucked lemongrass or one of five kinds of lavender grown on the property.

“We have spruce trees growing here, so we try to incorporate that into desserts too,” the pastry chef says.

Nicholson and Jason Bangerter, executive chef at Langdon Hall have also developed their own signature chocolate. After an invitation to Cocoa Barry’s prestigious Noir In, in Paris, the two were asked to select from cocoa beans from around the world. The result is the cocoa bean blend of chocolate they called Terrior Noir 70 per cent chocolate, available in both dark and milk chocolate, exclusively for the guests at the hotel.

“Both chocolates really embody the spirit of the property,” says Nicholson. “We have fireplaces throughout the public spaces and in the guest rooms, so we wanted a chocolate with some smoke and earth to it.”

Not surprising these chocolates make it into a variety of dessert options. And when it comes to plating the delectable concoctions Nicholson says, “I like our plated desserts to look crisp and clean, with no extra fuss on the plate. For our bombes or cakes, I like for there to be texture on the inside.”

One special dessert that guests have enjoyed for both gala events and New Year’s Eve Celebrations is the hazelnut bombe. “The bottom layer is a hazelnut praline, milk chocolate and cocoa nib layer,” explains Nicholson. “The center is a milk chocolate and hazelnut praline Chantilly. The glaze is a white chocolate mirror glaze. It’s made by whipping the Chantilly and piping into a semi sphere mold, then placing the bottom layer on it. We then pop it out and glaze it with the white chocolate glaze.”

At Christmastime, many families choose to leave the bustle of the city for some quiet time at Langdon Hall. One tradition they are guaranteed to find every season is plum pudding. “We use candied and dried fruit and brandy, We steam it and then serve with vanilla crème Anglaise or hard sauce,” Nicholson explains.

Beautiful venues help set the scene for special events Stand out desserts in all their various forms help to create nostalgia, memories and a sensational finale to every special event. / BJ