Classic trends in Italian baking with a summer twist 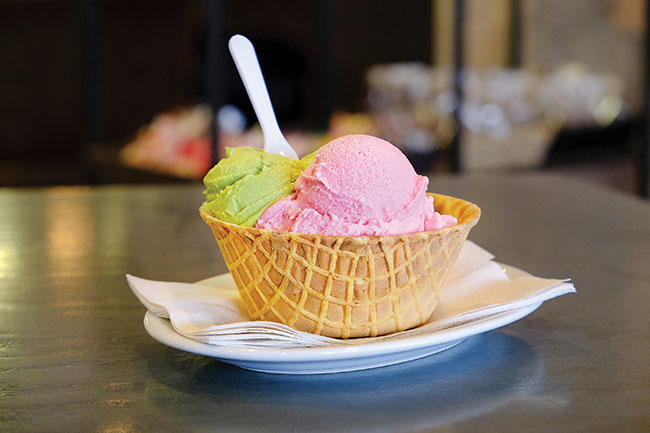 Across Canada, Italian bakeries have brought the flavours of Italy to our neighbourhoods. These are friendly, welcoming places, offering delectable sweets that are not only traditional, but often made from old family recipes, passed down through the generations. Many Italian bakeries are owned by families, who work together to bring the sweet life to the community.

Since 1985, Italia Bakery, in Vancouver, has been a much-loved local bakery. “ We make everything from scratch starting with our doughs, fillings, sponges, and custards. We hand roll and deep-fry our cannoli shells in house,” says owner Sam Pero, who first learned the baking trade, working alongside his father Francesco Pero, at the family-owned Fortuna Bakery, before school and on weekends. 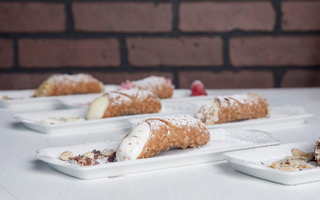 Since 1985, Italia Bakery, in Vancouver, has been a much-loved local bakery. “ We make everything from scratch starting with our doughs, fillings, sponges, and custards. Photo: Italia Bakery

Cannoli is the top-selling dessert, and Pero says the most popular variety is still the classic Sicilian. The handcrafted shells are filled with sweetened ricotta cheese, roasted almonds and chocolate chips.

There are family tributes on the menu. La Nonna is cannoli filled with raspberry ricotta, and topped with pink chocolate. It is in memory of his Nonna Margerita, who used to put ricotta and jam on his toast. As for the Nicosia, filled with sweetened ricotta, and garnished with roasted pistachios on one side and orange peel and a maraschino cherry on the other, Pero says it is “a tribute to my dad’s hometown Nicosia, Sicily.”

Other cannoli flavours include pistachio, coffee, vanilla, chocolate, tiramisu, and Nutella. The Baci is garnished with hazelnuts, and chocolate shavings, just like the Italian chocolate brand. Cannoli are available in mini and large sizes, by the half dozen or the dozen.

Tiramisu Slice is another top seller made with two opera sponges, brushed with a coffee liqueur. These are layered with a light and delicious filling made from mascarpone, whipped cream and tiramisu. More whipped cream tops it off, with a sprinkling of rich cocoa powder.

There is a complete line of cookies, including almond-based amaretti. Some are piped into fingers, others into swirls, with a whole almond in the centre, while others are simply pinched. Biscotti is available in classic almond, lemon pistachio and cranberry orange with pecan.

“Recipes have been in the family from the very beginning,” Pero says. “We also tweak and add new recipes our pastry chef and I create, and they are always a hit.”

Gelato is in demand all summer long! It has been on the menu since the doors opened 43 years ago. In fact, they were the very first shop to offer gelato in Ottawa. “We sell about 200 litres a week. And about 400 litres for Italian Week,” says Joe Calabro, pastry chef and co-owner of the shop. Italian Week is an annual festival in Little Italy that celebrates Italian culture every June.

The most popular gelato at PGI is the pastel green pistachio, with a strong nutty taste. Next is chocolate, or its many variations including chocolate caramel, chocolate orange, chocolate brownie, or chocolate mint chip. Fruit flavoured gelato includes coconut, mango, strawberry, banana, and blueberry. Other favourites include roasted almond, hazelnut, tiramisu and espresso.

Calabro explains the appeal of gelato. “People love it not only because of all the different flavours, but because it tastes lighter, and it is healthier than ice cream. Our recipe has more milk than cream, no eggs, and only four to seven per cent butterfat. It has a smoother, silkier texture. Ice cream is made of mostly cream, with up to 50 per cent butterfat.”

Other frozen desserts include sorbets, such as lemon, passion fruit, raspberry and blackberry. For Italian Week, Calabro developed new flavours for the crowds. “I designed Mojito sorbet, and a rhubarb and strawberry sorbet. Then there is a red velvet gelato, a Kinder Bueno gelato and a biscotto gelato, with chunks of biscotti.”

Customers often order cookies with their gelato. PGI carries a large assortment of biscotti. Vanilla-almond biscotti never lasts in the showcase for long. Then there are chocolate-almond, chocolate-pistachio and chocolate-Nutella. Sublime butter cookies come in vanilla, tiramisu, chocolate, Gianduja, almond, hazelnut and pistachio. The PGI Florentine contains colourful mixed fruit and roasted almonds. Custom made to be extra thick, half is dipped in chocolate.

Many locals start their morning with a breakfast pastry like sfogliatella Napoletana, or lobster tail, created with multiple layers of crispy pastry, filled with a vanilla pastry cream. Breakfast cookies are perfect for on the run and include fig, date and raspberry. Bomboloni doughnuts in flavours like Nutella, blueberry, lemon and key lime, can be enjoyed both with coffee and at home with evening wine.

Calabro puts his heart into this family-owned business. When he is not in the kitchen baking, or making litres upon litres of gelato and sorbet, he will be found chatting with customers, who have become friends.

Enjoy the taste of Italy this summer, with a visit to a local Italian bakery. Be inspired! Adding a classic Italian dessert to your menu may just become the next bestseller with your customers.