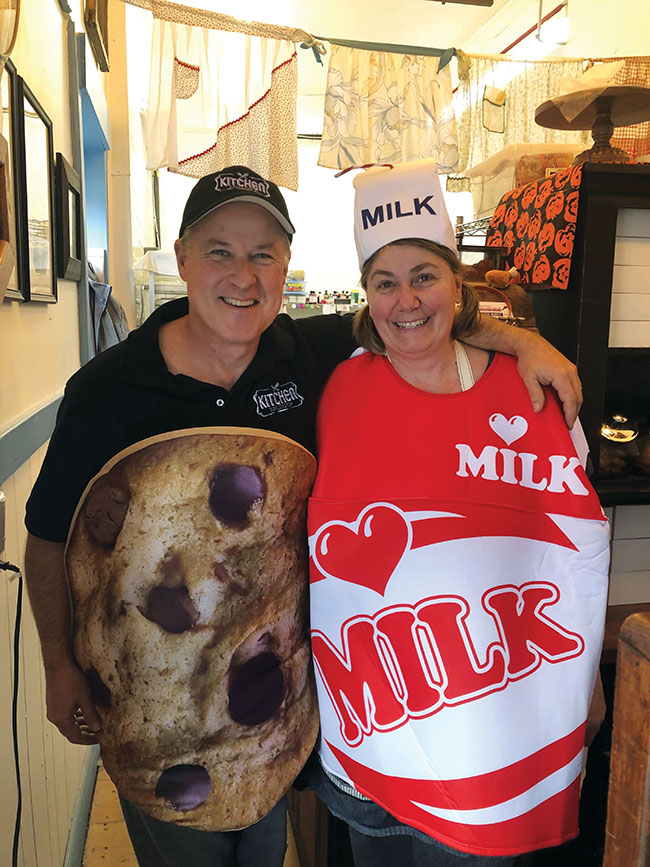 Scott McLauchlan (left) and Cindy Taylor (right) are good neighbours to their community and a perfect match inside out outside of their bakery. PHOTO courtesy of kitcen smidgen

Cindy Taylor, co-owner of Kitchen Smidgen knows that the pandemic has changed the way her town of St. Marys, Ontario does business. When the schools began to shut down in early March, Taylor knew that her bakery, among other companies, would soon follow lockdown orders too.

Her Kitchen Smidgen bakery is named after the size of her bakery; Taylor’s operating space and storefront combined is a total 300 square feet, shared between herself and her husband Scott McLauchlan. “There’s just the two of us in the bake shop, which is important because it’s so small I don’t think we could actually have another person. So, I do all the baking, and my husband is at the front of the house. And he’s amazing. Actually, Scott is so personable. It’s kind of comical, actually. We get a lot of older ladies that come into the shop, and I swear to God, they come in just so they can chat with my husband,” she laughs.

As they say, good things come is small packages, and Taylor puts that small space to good use in the downtime. “The plus-side of this, is that it really has given both myself and my husband some time to rethink the bakery and do some sort of serious marketing strategies. This has kind of been a blessing: we’ve already started to make some changes with regards to branding,” reflects Taylor. “We officially closed the bake shop after St Patrick’s Day, and we tried to figure out some other ways to earn some income.”

“I started with making cookies and partnered with the flower shop in town. With every flower delivery, you get two cookies.

“The other thing we did we, was to partner with another business in town. It’s called the Towne and Country Cheese Shop where they do a lot of frozen meals… they provided the frozen meal, and I made the bread, and a dessert. And we promoted that, and we made porch deliveries.”

Taylor demurs, “it was just it was another way to partner with another business to help them, and obviously, bring some food to all the people that weren’t able to leave their house.” Her partnership added the “more” to the aptly named, The Flower Shop and More. The florist promoted this partnership on her social media channel: if clients ordered a bouquet of tulips or a plant, they would receive two free cookies with their order. Since the florist had a van, Taylor adds, “all that I had to do was package and deliver a bunch of cookies to her shop.”

Giving added value to local shops that would normally thrive during the summer tourist months was not all that Kitchen Smidgen accomplished. “Two weeks in a row, I delivered to our local small hospital in St Mary’s.” Taylor delivered free of charge for all the health workers. Bread was also delivered personally, by dropping them into the roadside country mailboxes for clients who ordered them online or by phone. This contactless but innovative way to reach clients also helped build her brand.

“I got lots of people calling me and sending me messages…I think people really appreciated it. The other thing we signed up for it recently, is a program called ‘Fan Saves’, and they’ve done a great job with promoting small businesses across the country.” The town of St. Marys had also signed up for the program.

“It’s sort of a one stop shop site where you can go in, pull up St Marys and buy gift certificates from a multitude of different businesses in town,” explains Taylor.

The app presented a way to provide revenue for several local businesses while maintaining social distance. “It’s been great for us,” enthused Taylor. “Yesterday was a big day because I promoted it on my social media, and we were going to match every single gift certificate dollar that came in and donate it to the St. Marys Hospital.”

Kitchen Smidgen’s working space may be small, but the bakery has a big heart. Last year, the bakery designed moustache cookies to raise funds for prostate cancer, which raised over $1000. The bakery also participated in Giving Tuesday in a unique way.

“About four years ago, I’ve approached the BIA in town on participating with Giving Tuesday, as a town community event. So, the first year we had about 30 businesses participate. And what was interesting was how we approached every business, and asked them to participate in however they thought would be best for their respestive businesses..

“For instance, one business took in clothing for a homeless shelter and every person that came into the shop got a raffle ticket to win something from their retail shop. Other people collected for toys or food drives…what made it unique is that a businesses could do whatever they wanted as a sort of promotion, and they could choose the charity that was most important to them. This was more personal for many businesses.”

Giving Tuesday began in 2017 for Taylor. Her father was diagnosed with prostate cancer, and so she decided to raise funds by selling Moustache Cookies for ‘Movember.’

“With every single cookie we sold, 100 per cent of the proceeds went to Movember; it was a huge success. We are actually not even open on Tuesdays. We actually are only open Fridays and Saturdays. So to have that many people come into the shop to support Giving Tuesday was amazing. 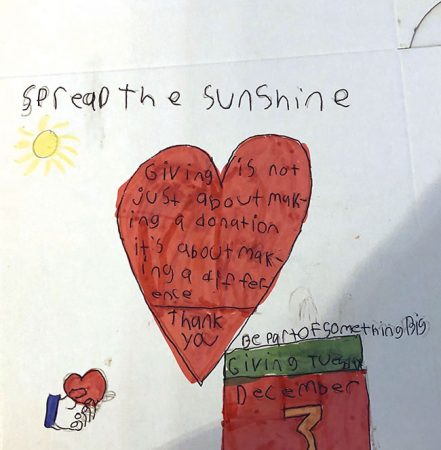 On Giving Tuesday, the bakery had its boxes decorated by local students.

Taylor states that after the pandemic dies down, they hope to open the shop again. “We have a small patio on the side of the big shop. It’s actually hilarious: the patio is actually bigger than the bake shop.

On the patio side, there’s a small window, and we’re debating whether to make that a takeout window. Then we would add the social distance lines outside, for people to pick up their order safely.”

Part of Smidgen Kitchen’s success lies in its connection with the locals. “We get people that drive from London to our shop, which is about a 30-minute drive depending where you live. They come just because it’s really quaint and everything I make is made from scratch. We’re unique in that manner. And again, it’s also because my husband’s customer service is just so phenomenal,” she laughs.

She adds she wouldn’t really change a thing about her shop, but the size of her operation does limit her option to increase production, which presents a challenge should the issue of social distancing return.

“We run out of our products fairly quickly. I’m in the shop from Monday till Saturday. I’m doing all my prep work from Monday to Thursday, but I’m by myself, so it’s difficult to keep up with the demands for the weekend.

“Scott knows 80 per cent of the customers by name when they come in. And yeah, it’s very community driven. I mean because the shop is so small, it doesn’t take very long to get a line-up out of the door.”