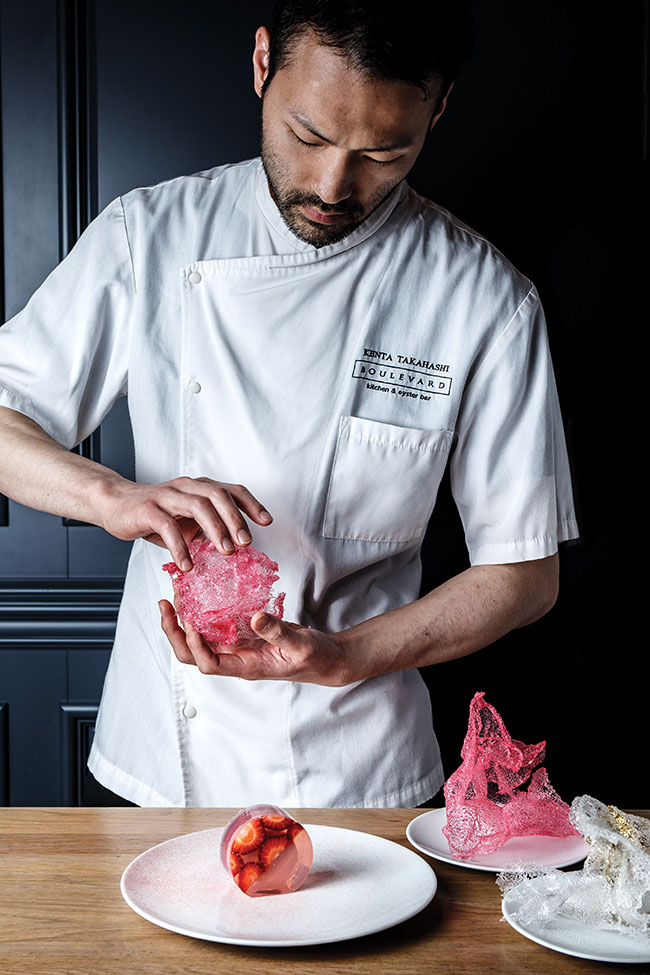 Kenta Takahashi, pastry chef at Vancouver’s 180 seat Boulevard Kitchen and Oyster Bar, is the 2020 recipient of the Best Pastry Chef award through Canada’s 100 Best list guide. Born in Japan, Takahashi studied at Tsuji Culinary School, honing his skills in classical French pastry. “I had been working in pastry shops for a long time and didn’t have lots of experience with plating desserts,” says Takahashi, about his initial experience in joining the restaurant four and a half years ago. “But I’m in a different game now,” he concludes. “What I do here is challenging, which is the best thing to improve myself, as a pastry chef.”

While many pastry chefs are exploring daring new flavour combinations, you will not find anything savoury on Takahashi desserts menus. “Most of my ideas and inspirations come from French pastry. My style is modern, but always based on the classics,” Takahashi explains further. “I do modern style plating, but at the same time, I like to show natural or classic on it.”

Takahashi admits that contemporary styling can run the risk of looking inorganic. “I am making food, not art, so I want people to eat it. I like a simple plate showing a contrast in colour and texture, without too many things going on.”

The pastry chef puts his dessert philosophy into words. “For me, balance means, light, not too sweet, but flavourful. I like simple flavour combinations, using well known flavours. I like an intense flavour.” Then, he gives an example. “When I make a cheesecake, I won’t add three types of berries. I pick one.”

Takahashi takes a scientific approach to creating new desserts. He starts with a flavour that he wants to feature. Then, he decides approximately what percentage of the dessert it will comprise and where it can be concentrated best.

Next, he considers the sugar level, within this flavour and decides how he can cut the sweetness from it or other elements of the plate. “Sometimes, it’s by adding less sugar or by adding bitterness or acid,” he explains. “Sometimes it’s by adding another flavour. Blueberry for example, has a good taste and texture, but the flavor is not strong.” Here he would add something acidic or refreshing. “Adding lemon to it may be one good answer. Matching lavender, which is a similar flavour profile will also work.”

Takahashi likes to keep elements on a plate to a minimum. “Three maximum,” he says simply. “Otherwise it is too complicated.” When it comes to garnishing his plates he says, he picks a couple that are part of the flavour of the dessert, “I don’t put something on the plate just to make it look nice.” 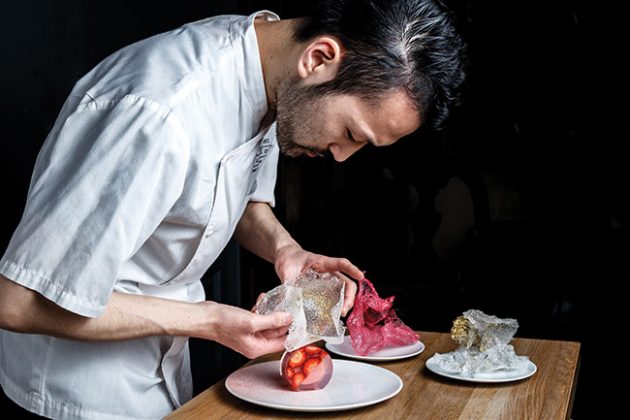 And this past summer there were 10 choices of ice cream and sorbet to choose from. For ice cream imagine flavours such as: vanilla; bitter caramel; chocolate; Earl Grey tea; lavender; rose or elderflower cream cheese. For sorbet think raspberry, mango, grapefruit, or white peach.

In August, Takahashi created some tri-flavoured popsicles, to the delight of customers. The first was made with a base of Earl Grey ice cream, dashed up with local British Columbia apricot compote and milk chocolate. The second was lavender ice cream, swirled with a local wild blueberry compote and white chocolate.

Spring may be influenced by citrus fruit and the colour of leaves in bloom. Think pistachio and grapefruits vacherin, with pistachio cream, grapefruit semifreddo, meringue, crumble, cream cheese ice cream.

Out of all the desserts Takahashi has created for the restaurant, he does have a favourite. It is called Fromage Blanc. He had the idea for a twist on the classic French dessert Crème d’Ange. “It is a super light and delicate cheese mousse. People in Canada love cheesecake and I so do I! It is a completely different texture to classic cheesecake. And this dessert can be gluten free with a few changes to garnishes.”

This freedom to change dessert menu with the season, well offering feature desserts as well keeps pastry chefs engaged in the spirit of creativity and restaurant patrons coming back for more. One cannot help but be curious about what Takahashi will create next. While embracing the beloved French classics, he has been able to inject his own modern style. The Canadian culinary scene has taken note.