The Forbes family shows resilience during a pandemic 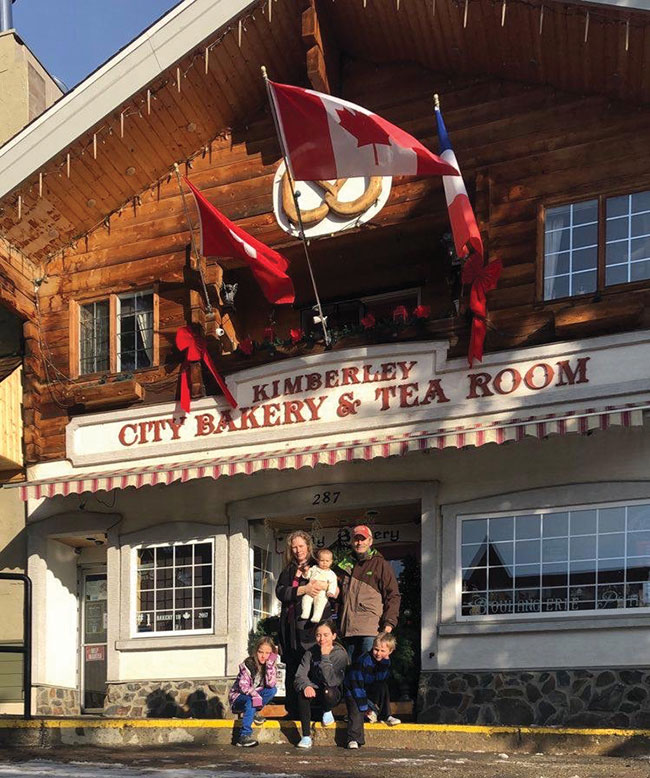 2020 has been a hard year for many so far, and even the 100-year Kimberly City Bakery (KCB) has felt the hardship. Their daughter has health issues, the family moved to Alberta and decided to sell their heritage bakery, but wanted to try something new: a food truck.

Then, the COVID-19 pandemic hit worldwide. “It’s stressful. We were trying to get a business up and running and we have a business that can’t run.”

Homeschooling three children during the pandemic, while trying to work the logistics of a bread bakery truck, is not easy. “We ran it on weekends in Cranbrook (BC), and it went well. It’s what we want. Most people go from a food truck concept to brick and mortar, but we’re going the opposite way.”

Owner Eric Forbes was heartbroken to close the 100-year old bakery that served the Kootenay, BC community. “We have a lot of visitors that come up for a day trip from Calgary to come grab stuff for dinners, especially at Christmas and Easter and that sort of thing,” added his wife, Michelle. KCB was renowned not only on the west coast, but with a devoted following in Europe as well. Michelle adds that they’ve had return customers from across the Atlantic.

The Forbes family made the bakery popular for its traditional European-style pastries and breads, but they didn’t want to give up the industry altogether. “I think it would be better for us to have a smaller market, where we could have more exposure. We can just focus on a few things instead of the bakery where I was doing about 400 items a day.”

Forbes and his family relocated in late August of last year. Between staff changes and many doctors’ appointments for their daughter, they managed to get the bakery food truck project to start from the ground up. No one in the family has had experience with trucks, and few are built with the purpose of baking. Many are made for quick meals rather than the long, slow baking process that involves wood ovens.

In searching for answers about his food truck, Forbes was informed that ‘no one does that’. “I was like, ‘huh, so no one does it, that means I need to do it. So we came back, thought about it. And one day we saw a truck for rent online, and we thought, ‘let’s rent a truck for this summer’. It definitely needed work…I hate to say it, but I’m glad that wasn’t a fixer-upper because it showed us the stuff you need to know to run it.”

“It’s not a kitchen in the way that you might think it is,” explained Forbes. “It runs differently; you’re in a very small space in the galley and you can’t pass each other. At the same time, people recognize the truck. It broke down on the way up to Calgary. I parked on the side of the road, and people were asking, ‘Oh, are you open?’” laughed Forbes, recalling how potential customers were so excited to see the bakery truck, only to discover it stopped due to engine trouble.

Forbes outlined how clients place their orders at a drive-thru compound: “You park in the line where the truck you want is parked, and pre-order via their Instagram account, and you can get your food from the food trucks. We’re limited as to what we can do, with little staff. It’s a very small truck compared to what I have in the bakery right now. We have learned to work in close proximity to each other,” he concedes.

The bakery truck finds its customers through social media and email campaigns. They receive emails from interested clients asking where they will be parked, or where the truck will deliver pre-ordered baked goods, with the location announced shortly thereafter. “I park it somewhere and I start baking in the morning. Come ten, eleven o’clock, you can come pick up your bread,” says Forbes.

The family hopes that another baker will buy the legacy that comes with the 100-year old bakery, and provide the community with its European-style baked goods. “We do have recipes that we’ve been using from the 1920s, that we’d like to pass on to people that were there right from the very beginning. We had to modernize them a little bit but it’s basically the same recipe. We’d like to continue with that and offer them to the new owners.”

“We are hoping that someone will see the bakery as an opportunity… and hopefully, if they don’t have the full baking experience necessary to run it, that they’ll run it as a co-op and have different baked goods: This person does doughnuts, this person does cakes and that one does breads, and so forth,” suggests Forbes.

Baker’s Journal wishes the family good health and prosperity, and that they’ll “keep on trucking.”