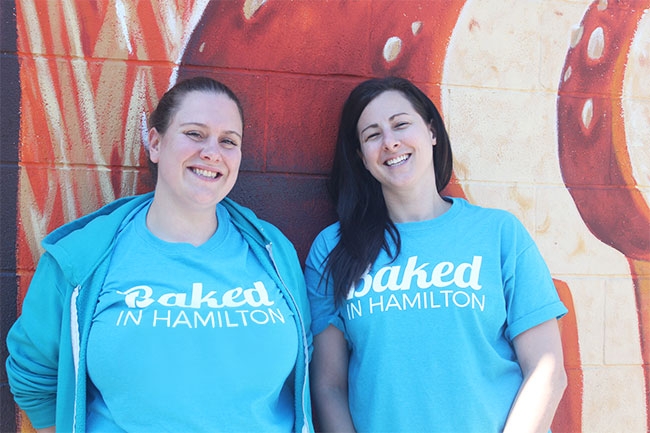 Sometimes, all it takes is one cup of coffee to change your life.

For Josie Rudderham and Nicole Miller, former apprentice classmates at Niagara College who reconnected over Facebook, that’s all that was needed to start a bakery. That, and a shared hometown, values, vision and industry experiences. And then, even with a 90-page business plan in hand, some serious guts.

They bought a house in Hamilton in 2008 with the dream of opening their bakery. Along came the recession. Rudderham had a baby. The bakery project was on break. Rudderham was subsequently laid off near the end of her maternity leave, and she used the opportunity to sign up for an EI program that extended the insurance payments for budding entrepreneurs while they take business classes and work on their plan.

Miller and Rudderham tackled the renovations as a team, with some carpentry skills from Miller’s dad and electrical skills from Rudderham’s husband. Miller and Rudderham did the floors, put up the drywall, and built an apartment above it. What they didn’t know, they figured out. They both worked other jobs while remodeling the house. The approach was from scratch, just like their baking.

“Our partnership itself went through a trial by fire with the renovating,” says Rudderham. “We did these floors, we put in this drywall, we figured it out and we didn’t know how to do any of it.”

Cake & Loaf was a-go. The challenges of renovating a house together and economy instability failed to shake the vision that was shared over that one cup of coffee.

The idea was solid. Hamilton needed a scratch bakery, they decided. But the values took it beyond that. They wanted to build a harassment-free workplace where people made a living wage and work/life balance was valued. They envisioned sourcing locally and investing in small family farms.

The plan pictured a bakery with a staff of four: themselves plus a baker and front of house. They now have a bakery of 29, themselves included, with five departments. The business expanded to a second location in the year-round Hamilton Farmer’s market. The idea was more than solid – it’s been a resounding success. Rudderham and Miller have built their dream through concrete and measurable procedures that have taken years to solidify and are always ongoing.

Cake & Loaf has proven an innovative bakery. Let’s break it down and see how they did it.

Staffing
Rudderham describes their approach as employee-centric. She says they never meant it be female-centric, but the applicant pool seemed to tilt that way and the result is that only three of their staff are male.

Vacation: Cake & Loaf pays its staff vacation pay. The owners received feedback that some staff were hesitant to take vacations because they say they can’t afford it or felt they would be letting people down. Miller and Rudderham ensured time-off for their staff in a few ways. They close for two weeks after the busy Christmas period and for a few days after Easter. This year, they made it mandatory for staff to take one week in the summer as well.

Work/life balance: The bakery offers employees one unpaid hour per shift that they can use to workout. Miller and Rudderham negotiated reduced gym fees with the facility across the street. Most of the bakery’s staff (about 80 per cent the owners estimate), are on four day weeks with nine or 10-hour shifts. “It’s really about seeing the human behind the shift,” says Rudderham. “We don’t create shifts and then try to fill them. We go to the employee and say ‘does this work for you?’ and trial them.”

Recruitment/retention: Over the years, hiring has evolved into a four-step process. Applicants first interview with the department manager, then the owners, work a trial shift, and then start a three-month probation period.

In exchange for the bakery’s commitment to its staff, the owners ask each new hire to commit to two years. This is a promise in spirit, and there is nothing that can be done if someone decides to go sooner. It is a principle that the owners are looking to see that demonstrates commitment on both sides.

When asked what each were looking for in a candidate, Miller says, “I am the more emotional business partner and I feel it in my gut.”

Training: The bakery developed a passport program that lists tasks to be completed during the probation period, including working two hours in each department.

Finding the signature seller
Cake & Loaf morphed from an utterly comprehensive bakery to a streamlined comprehensive bakery. There are five departments at the Dundern street location: cake, pastry, savoury, bread and front of house. The confectionary department is housed at the farmer’s market. The bakery sells local coffee beans, artisan jarred goods like jams and peanut butters, and even company branded tea towels and clothes.

In the early days, the owners were hiring new staff and the burgeoning team was churning out ideas left right and centre, plus up and down.

“Initially we were doing too much,” says Miller. “We were making every product that any customer could ever want. Slowly we learned to focus, downsize, and supply items that we knew would excel at.”

Now, the line-up is fine-tuned and what’s available is seasonal to a T, says Miller. Things come off the menu as the local produce also stops being available.

“The top seller right now in terms of revenue is Grab n’ Go cakes,” says Rudderham. “And for years we couldn’t sell a Grab n’ Go cake to save our lives.”

A Grab n’ Go cake is a six-inch cake with three layers of cake and three layers of filling with the flavours based seasonally. The bakery can add a plaque for customers. The idea is that people can come in and purchase a high quality cake without having to go through an ordering process.

“We tried to play with it, but we couldn’t find space in the pastry case because once again we had so much products,” says Miller of earlier days. “We streamlined and we had a little more space…and then it just blew up.”

“I am so proud of how consistent our pot pies are because it’s made from scratch, and it’s a challenge to make it exactly the same every time,” says Rudderham. The bakery sources its chicken from Fenwood Farm in nearby Ancaster. The bakery provides pies each week to be sold at the farm, delivered while picking up chicken.

Great care has been taken to source locally, and this has left the bakery with a “million” suppliers, says Rudderham, which can be frustrating. The owners’ goal was to support local farms, and they accomplished this by creating relationships with the smallest farms that could supply them.

The cream egg brownie is a staple seller. Last year they sold 5200 in six weeks. The fudge brownie has a white chocolate fudge layer, which is yellow at Easter, and shop-made cream egg goes in the centre with milk chocolate on top.

The OMG bar is “a play off what my Mom used to make all the time,” say Miller. “It’s like Domino cupcakes, but we made it in bar form. It’s chocolate cake with chocolate chip cheesecake embedded in it, then cream cheese icing, and decoration. It’s super moist and with the two components clashing, but beautifully clashing, it’s one of those bars that you do say OMG.”

Every product is from scratch, with some ready-made exceptions: fondant, gum paste, peanut butter, Nutella and some jams.

From scratch and local: from vision to execution, it’s been a recipe for success.

Partners from scratch
Forming a successful partnership, they conclude, as really come down to communication.

“If we got all mired in production we make all sorts of assumptions of what the other person will think and we lose touch with how the other partner is feeling. So that’s really, really important – business meetings that don’t involve other people,” says Rudderham.

“I feel like you have to aggressively pursue honesty at all times,” says Miller. “At every step. Always put everything on the table.”

Rudderham has always overseen kitchens, savoury and pastry while Miller took charge of cakes and front of house. They used to have a lot of overlap, but now they have almost none and that’s taking some getting used to. They are too big to know what the other person is doing all the time now.

Looking ahead
The bakery hit its five year mark and the team realized they had made it. “Our focus shifted from survival mode to planning mode. We have more paperwork that we made in the last year than we made in the first five years,” says Rudderham.

Miller says she would like to eventually have a third location for the cake department as a next step.

The long term dream is to have different locations for every department so they can all have their own purpose built kitchen, says Rudderham. Currently, breads and cakes share ovens, which isn’t ideal.

The owners won $100, 000 in a small business challenge, and “The Lights of Dundern” became one of their big projects in recent years because of it. They are in planning mode for this year and will host a street festival in winter that will see “Christmas spilling out on the street, freshly candied nuts, musicians, winter celebration: It’s very rewarding and it wasn’t part of the business plan,” says Rudderham. “Last year it was a genuinely magical evening. The snow just started falling. We had Santa come out and the kids were going crazy for him. The line-up of performances was perfect. It was a really nice evening.”

From bakery to beyond, Cake & Loaf is becoming a part of the community fabric in surprising and wonderful ways.