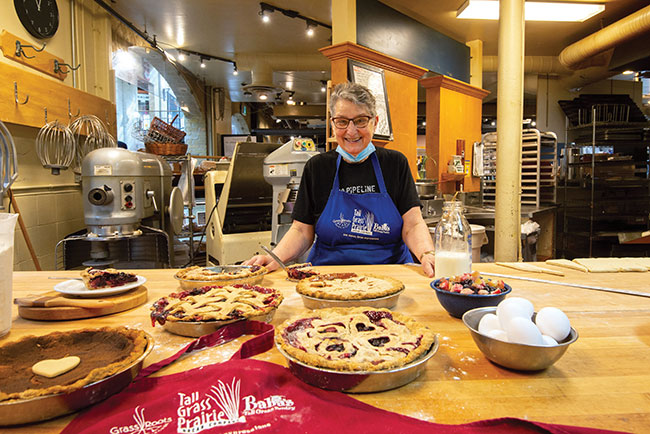 “When I grew up, food wasn’t anything you ever bought,” says Tabitha Langel, co-founder of Tall Grass Prairie Bread Company and Tall Grass Bakery. “For me the driver was local food, farm connected food.” Photo: Mike Sudoma / Winnipeg Free Press

Langel is one of five founding partners in Tall Grass Bakery in Winnipeg, a respected business that is much more.

The warm, thoughtful, forthright Langel spoke with Bakers Journal about the principles established by the original Grain of Wheat Community Church and Bread Co-op in the 1982 and kept alive today by its offspring, the thriving Tall Grass Prairie Bread Company and Tall Grass Bakery, and how they intersect and influence her role as a leading businesswoman and community advocate.

It’s a remarkable journey and you can learn more about the roots of Tall Grass Bakery, read “Organic, sustainable and profitable” by Mireille Theriault in the April 2008 edition of Bakers Journal.

The original store in the Wolseley neighbourhood opened in 1990, has since become a nurturing, ethical community hub and tourist destination. The Forks Market location opened in 2002, followed in 2006 by the Grass Roots Prairie Kitchen, which sells ready-to-eat meals, soups, salads, jams, pre-serves, pickles and other delights. In 2020 they celebrated their 30th anniversary.

Tall Grass was founded by Langel, Ray Epp, Nancy Pauls, Sharon Lawrence and Lyle Barkman. “We committed to consensus decision making that meant we had to learn practices that involved mediation tools,” Langel says. “Food should be made in peace and respect. This has allowed diversity on the team to be an asset, rather than a liability, and has greatly contributed to the longevity and success of the company.”

The business is now operated by Barkman, Langel and her husband Paul Langel, who became a partner, and Loïc Perrot, a fifth-generation master baker from Brittany, France, who joined in 2005 and brought with him classic French techniques.

Men ‘assertive’, women ‘aggressive’
For our “Women who lead” issue, Langel shares wisdom gleaned from the early days when she sometimes encountered discrimination.

“It was quite a while before some of those old farmers would stop asking to talk to Lyle. That was one piece of it. So much sexism is also subconscious. While we tried to be egalitarian, we were people of our times. So much sexism is subconscious and, when I think back on our jokes, they were often sexist one way or another.”

She adds, “Lending institutions, business schools, the trades and all of us still have built in biases that can be sexist and racist. It takes time and awareness to change. I am grateful that on our team we are open and aware of this, and I do feel respected and grateful.”

“At the CEO level, when men want to make a point, men are ‘assertive’ and women are labelled as ‘aggressive.’ . . . If a man comes to the table and says this is what I bring to the company, he’s respected. Women are discouraged from having that kind of confidence. If they do, a year later, they are likely to be let go. Those are things that surprised me.

“The world is becoming more egalitarian. I feel very respected now. Young women starting out do face biases. The baking industry does need to look more closely to make itself more attractive and friendly for women.”

Langel thinks that we tend to profile large, highly profitable bakeries which are often male-led: “Growth needs to be analyzed to ensure it is ethical. The reason profit is the bottom line is there are important lines above it.”

Proximity to farmers
Langel, who grew up in a Hutterite community where 15 families live collectively, credits the bakery’s proximity to farmers and transparency for its longevity and appeal to “heart-stoppingly loyal” customers who gladly line up in -28 weather on a Saturday morning for a taste of wholesomeness.

“When we first went to the bank year ago, they said people don’t care about the farmers. I think that’s not true. It’s in our DNA to care about the farm. I think people hunger for a place where they can connect to the farmer. At our bakery, they get to meet their farmer, she comes in, holds court and talks with the customers.”

They are busy with succession planning and have used the tried and true practice of choosing from within, to ensure shared values and visions. “We also currently have a young woman doing her masters business degree on the Tall Grass model. She is providing us with the academic literature on the subject of succession. This is very helpful, and we are confident that Tall Grass will continue to ply its trade in the years ahead.”

We leave you with the words of Stuart McLean, who toasted Tall Grass during a 2006 episode of his CBC radio show Vinyl Café filmed in Winnipeg:

“Tabitha says she has learned that you can make a difference to the local economy and make a living at the same time. “The questions that we continue to ask,” she said, ‘Are how can we be more local? More just? More environmentally conscious, than we were yesterday? It has been an unbelievable journey,’ she said.”