A primer on baking with cannabis 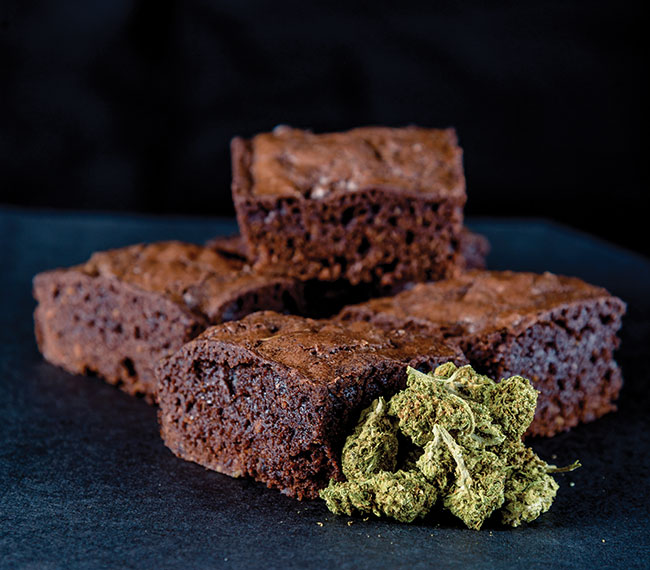 Each strain of cannabis has its own flavour profile ranging from citrus to floral, and can work with enhancing your baked goods existing aromas. Photo credit: © Christopher / Adobe Stock

On January 26, 2021, The BAC Ontario Chapter partnered with Loyalist College Applied Research to bring baking professionals a webinar primer about baking with cannabis.

Called, “Cannabis Edibles for Bakers: Insights Into Baking Quality Edibles,” it was co-hosted by Barb Allen from ARC and Chef Scott Royce, discussing the challenges that bakers and confectioners might meet when baking or making sweets with cannabinoids.

The event was introduced by Dr. Kari Kramp, the head of Laboratory/Scientific Manager for the Applied Research Centre for Natural Products and Medical Cannabis at Loyalist College (ARC.)   “We have an absolutely tremendous team. I’d say that is our biggest strength from our research and technical staff perspective, from our students, is the experiential learning opportunities that they gain and working for the center. It’s fantastic. And we have business and operations specialists that have developed over time and extensive network across not only our region but across the country.” Dr. Kramp adds that ARC is capable of working with a partner or clients on a particular project to help identify gaps.

Barb Allen, the instructor of Cannabis Applied Science and postgraduate program, and researcher within ARC’s natural products in Canada, discussed the scientific challenges that complemented the art of baking. Allen covered the basics of terpenes and cannabinoids. “It’s really the buds, that are the major powerhouses of producing the cannabinoids and they’re harvested, dried, trimmed and cured, and then the cannabinoids are extracted in many cases. Gone are the days of chopping up the cannabis and putting it right in.”

Allen and Chef Scott Royce feel that the market for cannabis-infused baked goods or candy or, “edibles” are a growing market. The webinar hosts recommended that attendees ask themselves if they wanted their ideal customer to be a recreational user who is looking for THC for a psychotropic high, or one who uses CBD (non-psychotropic to manage pain.

Now that cannabis has been legal for a little more than three years, there has been growing commercial interest, particularly since the pandemic. While most of that interest was determined to be recreational, the number of consumers interested in buying CBD-infused goods to deal with anxiety and physical discomfort is increasing. While the dose per “unit” or per serving for THC remains 10mg, there is no limit yet to dosing for CBD.

“You’ll find is that people that are looking for CBD in their medical treatments,” said Allen. “They may go to much, much higher doses. You’ll see that CBD would be something that you’re going to need to think about if that is the intention of your particular product, if it is for those kind of medical purposes.” Allen states that there is “very, very strong evidence” for cannabinoids in the treatment of chronic pain in treatment. “Especially those that are in chemotherapy-type treatments, and also for spasticity due to multiple sclerosis.”

The key point that Allen wanted attendees to pick up on was that the physical or chemical properties of cannabinoids are not soluble in water. “These are the type of molecules that in the pharmaceutical industry we might have even described as ‘brick dust,’ they’re not going into water very easily. And so this is absolutely critical this type of property to a particular recipe that you might be making.” Allen recommended that bakers use fats like butter or coconut oils for vegan options when trying to incorporate cannabis into baking.  “Cannabinoids are stable as emulsions in most oils.” However, Allen cautioned, “they are sensitive to UV radiation, and they are also highly sensitive to oxidation. When we talk about having potency of THC in your products, you need to keep that in mind, because you can actually have this active THC ingredient degrade in your product if it’s exposed to light and exposed to oxygen.”

Most bakers concerns, aside from potency is the overall effect that their baked product will have on their clients. Some describe an energizing effect when consuming an edible, and other experience a relaxed sensation. This is due to the presence of cannabinoids, aside from THC and CBD, as well as terpenes. Different strains of cannabis will present different benefits. For instance, one strain of cannabis could contain THC, and terpenes like pinene; the entourage effect reflects the effect tat combination of terpenes and cannabinoids have working together. The TCH might help a client with sleep, while the cannabinoid or CBD might aid with pain and inflammation.

The terpenes are known for their distinctive smell; some bakers will prefer a certain strain over another to highlight its herbal flavour. Some cannabis strains have a terpene called limonene, which give citrus its strong citrus scent, and is favoured by cannabis bakers. Other strains of marijuana have floral fragrances, similar to lavender. The alternatives to “skunky” buds are more diverse than bakers might think.

Chef Royce said, when chefs talk about extracts there’s two schools of thought: the co2 extract, versus the solvent-based extract. “Generally speaking, the solvent based extracts are less widely used, because the clients are concerned about the process baking that will be similar to the use of palm oil. This product is considered ‘less clean’ or pure by some in the cannabis space. Clients in the marketplace are concerned with residual solvents, potentially in the product. Distillate cannabis is extracted into a crude oil and refined. This product is stripped of all flavour, and the final product is a viscous honey coloured oil. This is the most commonly used product that we see in edibles today. It’s largely due to the fact that the product is odourless and mostly flavourless.”

Once the cannabis has been heat-treated to activate the THC or CBD, cannabinoids can then be extracted into a carrier oil, for example butter or coconut oil, for vegan or vegetable-based baking. “That product has terpenes intact and has the most prominent cannabis flavour; it is similar to clarified butter.  If we’re using butter for that extraction, it’s important to note that the milk solids are removed during that infusion, and that could affect the creaming of the butter in your recipe or the spread of your dough,” cautioned Royce.

Next, alcohol, so cannabinoids are also alcohol soluble, the product that we see on the market for this are called ‘tinctures.’ The cannabinoids are soaked out of the decarboxylate cannabis, and then the alcohol is removed from the mixture, leaving an oil based, usually green, yellow coloured mixture.

“They do have a varying level of stability,” continued Royce. “So, when we’re choosing our extract for edibles, it’s important to consider its viscosity color, aroma, flavour and cannabinoid profile in the art, the rest of the extract that we choose is largely recipe dependent. There’s so many variables, it’s best to look at recipes in a case by case scenario.”