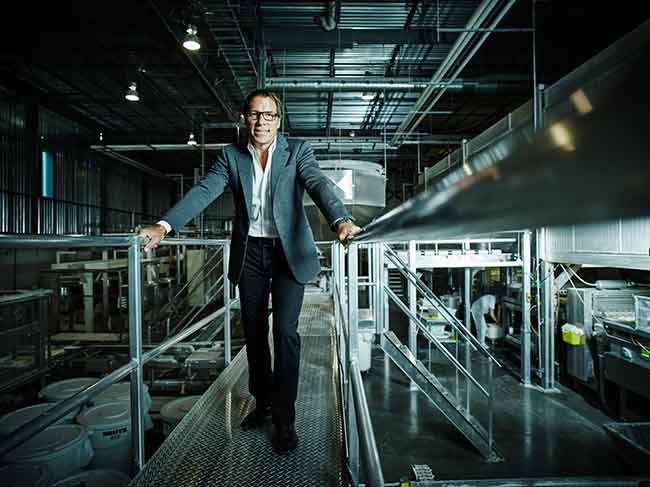 Boulart was the first to launch the ciabatta baguette in North America. Michel Saillant, founder, believes that product was critical to the success of the business. Photo credits: Images courtesy of Boulart

Thinking back to the early struggles of selling his vision for an industrial artisan bread factory to investors, Michel Saillant fondly remembers encouraging words he received from his mother: “Don’t give up,” she told him, “You’re so right for this project.” And now, over a decade later, his vision has become reality, and Boulart, the Montreal-based bread wholesaler, is achieving annual sales of over $50 million.

Born and raised in Montreal, Saillant (57) is a serial entrepreneur. After leaving high school he spent five years in California, where he opened one of the first juice bars in North America. He’s also restored vintage cars, built houses, and worked in the fashion industry. That combination of sales savvy, mechanical skills and design sensibility created a perfect foundation for his bread factory business.

Saillant’s introduction to the baking industry was in 2000 when he met the owner of the Au Pain Doré bakery in Montreal. As Saillant describes it, the artisan bakery was trying to industrialize its process and further expand the business, so he joined them, initially as a consultant and later as a vice president (his first real job). “That’s when I fell in love with bread making,” says Saillant.

His new passion turned into a business quest. He saw an opportunity for developing the artisan bread market, but it would require a significant investment to build the factory. Unable to make it happen with Au Pain Doré, he left the company and in early 2004 began working on the business plan that would develop into Boulart.

Fund raising
“I saw there was a gap between the artisan bread makers making high-quality low-velocity production, and the industrial operations that had velocity but not the quality of artisan bread,” he explains.

He went to Europe to test his plan, making artisan bread (long fermentation, high water content, no dough improvers, unbleached and untreated flour) at an industrial scale. “Once I was 75 to 80 per cent of the way there, that’s when I was convinced I could make it and went to see investors,” he says.

The project would require $15 million to get off the ground. Saillant shopped his plan to banks and venture capitalists. “It was very tough,” he recalls. “Banks were telling me to reduce the size of my project, but I knew it wouldn’t work if I had to make compromises.”

It took three years of knocking on doors, but Saillant refused to back down and he was finally able to secure the funds.

The factory opened in 2007, consisting of two make-up lines in a 55,000 sq. ft. leased facility in Lachine, a borough in southwest Montreal. He’s since purchased the building and the neighbouring property to create a stylish state-of-the-art 125,000 sq. ft. space. “It’s the pride of the Lachine,” says Saillant.

Production flow
The clean factory now operates three stainless steel automated bread making lines, where nobody touches the product. Even the packaging is fully automated with robots picking up the products and placing them in the cases and straight into the blast freezer.

From the beginning Saillant kept the project low key because he wanted to take the market by surprise. He was determined to create a high quality product while being the most efficient at it. He’s convinced that when the bigger players in the business try to replicate his operation he’ll still operate more efficiently. “If you want to try to kill me with a price war, no problem, I can go for it,” says Saillant.

The only equipment that is truly unique to his operation is the laminated dough process. Together with engineers he’s developed the technology to handle the production scale. It’s technology that was critical to the company creating its ciabatta baguette, a product Boulart introduced to North America. “And thank God for that ciabatta baguette, otherwise we would never have survived,” says Saillant. “Making a great bread doesn’t guarantee success,” he says, noting that he needed to deliver something unique.

At the beginning getting the operation running well was a challenge. “We were throwing away 50 to 60 per cent of production,” he recalls. “The problem wasn’t product quality, it was consistency.”

Meeting the rigorous demands of large retail food service companies, like supplying sandwich bread for a large national coffee chain, required very precise specifications. “That level of precision is something we couldn’t do three years ago, but today having to meet those requirements has made our business better,” he says.

Making bread is a daily challenge and he credits his top-notch mechanical team for keeping the lines running. Production in the factory operates 24-hours-a-day, five days a week, and they can’t afford a breakdown. “If the line stops for even five minutes, we’re over proofing, or over fermenting, and that changes the spec of the product before it gets baked,” he explains. It’s a high level of preventive maintenance by his crew that keeps the operation running like clockwork.

Sales agent
Before the production lines were even up and running Saillant needed to land some large accounts, and he achieved initial success from two major Canadian grocery chains. He was able to secure private label products within each. “They took a real chance; they believed in me,” he says. Both wanted exclusivity from the start, something he couldn’t offer because he needed the volume. They relented.

Branding and design was also important to Saillant. From the beginning he worked with a brand design specialist. Every detail, including the business cards and letterhead paper quality was considered. He was new to the market, so the first impression was important.

The company name came from a street sign he saw in Paris. He thought Boulart was noble sounding, and it also combines boulangerie (bakery) and art.

“I’m not selling bread, I need to bring added value,” he says, and part of that is providing his customers with a unique experience. He describes the company offices as very sleek and minimalist. “You don’t feel like you’re at a bakery.”

Saillant takes great pride in inviting customers to visit the operation. “What I want to do is take them out of their traditional way of doing business, because the bakery business is (I’m sorry to say) a boring industry, and it shouldn’t be.”

In order to further highlight the company’s facility, Boulart has built a virtual reality application, where customers can put on a headset and take a 3D tour of the factory. “We are a company that always tries to stay ahead of the game.” They bring out the technology at trade shows as a teaser to encourage customers to visit. “Once I get them inside our four walls here they fall in love with it,” says Saillant.

Boulart was the first to launch the ciabatta baguette in North America. Michel Saillant, founder, believes that product was critical to the success of the business.

Trend setting
Boulart’s facility may close some deals, but it’s the company’s products that need to satisfy clients. Boulart’s artisan breads, made with only basic ingredients, are very clean label and on target with the ‘better for you’ trend. “That trend was there nine years ago when I was first developing the business, and it’s continuing today,” says Saillant. He believes that had he launched the business five years earlier it could have failed because the market wasn’t ready for it.

“That was a challenge when we started, even with non-organic flour,” he says. But now that the company’s volumes are large enough, mills are meeting Boulart’s standards.

In order to keep ahead of the trends, Boulart’s most recent product launches have included focaccia, small burger buns, thin sandwich buns and its award-winning ciabatta bites.

Artisan for the masses
Saillant doesn’t compare Boulart to the many artisan bakers springing up across the country. “I am not competing with these local bakeries who are delivering small volumes in their neighbourhoods. I ship truck loads. My business is to do what they do but at a large scale and make it readily available.”

He sees the local artisan bread makers as trend-setters who are putting pressure on the industry to make better food. “Consumers want the quality of the products they buy at their local farmer’s markets to be available in the grocery stores,” he says. And while big grocery chains are trying to offer local products, he insists that logistically it doesn’t work within their vast organizations. It’s also a matter of consistency from store to store, being able to supply the same level of quality across a 300-store chain. “That’s where I come in,” he says.

What’s next?
“We have a clear vision of where we want to be in five years. We’re not a big player, but we have a nice large facility, and we want to have better market penetration.” Saillant notes that sales to the U.S. now represent just over 50 per cent of Boulart’s business, and it’s where the growth is coming from.

Overall, within the industrial bread wholesaling business he describes Boulart as a drop in the bucket. The retail food service and retail industries are huge and the trend continues to be leading towards a demand for better quality bread. “We basically started Boulart before the market was ready, and now we’re well positioned and there are plenty of opportunities out there for us.”