Features Business and Operations Marketing
HostMilano 2017 Caters to You

With its North American focus, the Italian trade show is a can’t miss event this year 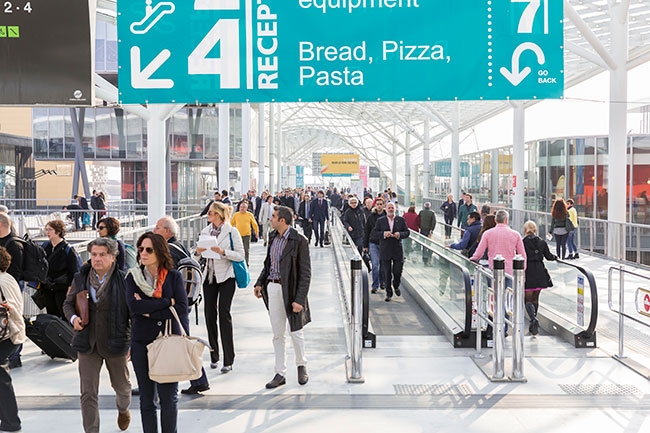 The FieraMilano convention center in Milan, Italy, is the site of HostMilano 2017 in October.

Mark your calendar for HostMilano 2017, one of the world’s top trade shows for companies in the foodservice, food retail, and hotel industries.

HostMilano takes place Oct. 20-24 in Milan, Italy. Show organizers have recognized the baking industry as a sector buzzing with growth opportunities. In raw materials and flours, the show’s range of products on offer has expanded to include cereals alternative to wheat and gluten-free, and which until recently might only have been known locally.

This is the case for teff, also known as Williams lovegrass, or for “pseudo cereals” like quinoa and amaranth, along with ancient grains like spelt that have returned to popularity. Also thanks to these many novelties, worldwide cereal production is forecast to rise by 0.9 per cent this year to 2,566 million tonnes. Consumption in 2016-17 is up 9 million tonnes (2.4 per cent) to a total of around 383 million tonnes. Over half of all the output is concentrated in China, India, Russia, the United States and France.

At HostMilano, the baking arts are showcased in a context designed to leverage opportunities across contiguous supply chains. Manufacturers of raw and semi-processed materials, machinery, and processing and storing accessories and equipment will all be converging on the bread, pizza and pasta area at the Fieramilano fairgrounds.

This complete supply chain overview is situated next to the foodservice equipment area, which leverages the greatest possible value from affinities between these two sectors. Bread is increasingly becoming a star player in restaurant catering, while boutique bakeries are increasingly popular together with gourmet pizza, and pasta prepared and consumed in retail. HostMilano’s overview of hospitality and foodservice is rounded off by the show’s other two macro-areas: coffee, tea with bar, coffee machines, vending, ice cream, pastry; and tableware and furniture.

More Advantages for Exhibitor Companies
From raw materials like flour and yeast to the finished product, doughmakers to ovens … all under the banner of quality and innovation. HostMilano has confirmed its role as an international industry hub thanks to the presence of top-tier companies and a full range of products dedicated to the bakery, pastry, confectionery, pasta and pizza supply chain.

Moreover, HostMilano’s desire to bring supply and demand together leverages the presence of at least 1,500 profiled buyers from around the world, profiled and selected by its network of local international agents. Host 2017 has a special focus on North America and the Middle East. The show is working to attract high-profile visitors from one of the world’s highest growth potential regions: indeed, North America is a focal area in the Italian government’s Made in Italy promotional campaign.

Host 2017 guarantees high-quality exhibitors, visitors and events, of which it staged more than 400 last time round, many of international standing. For bakers, Host 2017 is putting on the European Pizza Championship staged by Pizza e Pasta Italiana. Pastrymakers can look forward to the world finals of the Cake Designers World Championship and the World Trophy of Pastry, Ice Cream and Chocolate, in collaboration with the Federazione Internazionale Pasticceria Gelateria Cioccolateria (FIPGC), with 16 finalists selected from all four corners of the globe pitting their wits against one another with spectacular creations; this year, the special focus is on coffee and chocolate.

There’s More to Bakery Than Bread
When we say flour, we automatically think of sweet things. Well, the entire confectionery supply chain is on show at the pastry area, next to the gelato sector. Companies with hundreds of years’ worth of history – major names like Taylor Company, Anselli, Alvena, Mec3, Pregel, Bravo, Bras/Ugolini, Ifi, Jose’ Jordao, Frigomat, Iceteam Gruppo Ali,  Carpigiani, S.P.M., Alcas, Gel Matic, Valmar Global in Gelato and Babbi, Selmi, Isa, Ciam, Scotton, Mussana, Demarle, Pavoni, Silikomart, Martellato, Novacart in Pastry – will all be in attendance. They will also showcase their wares at the macro-area encompassing coffee, tea, bar, coffee machines and vending.

More and more, all of these sectors are coming together and cross-pollinating in a continuous exchange of competencies and ideas. With catering next door – always Host’s flagship – and starred chefs putting on spectacular show cooking displays, this completes the picture of the ice cream and desserts world as it takes on an increasingly well-defined and strategic role in both restaurants and bars.

Ovens, dough makers and the latest generation of machines are solidly in the Third Millennium, progeny of the Internet of Things. Now it is possible to communicate with them and programme these machines to relieve chefs, pizza makers and bakers of the most tiring and repetitive tasks. Not just an exhibition but a hub for trends and innovation, HostMilano presents the next generation solutions in terms of formats and layouts. The most interesting proposals on show will win the much-sought-after Smart Label award, dedicated to innovation in professional hospitality and promoted by HostMilano, in partnership with POLI.design, a Politecnico di Milano consortium.

The FieraMilano convention center in Milan, Italy, is the site of HostMilano 2017 in October.

An Edition Poised to Set Attendance Records
With about six months still to go before the official opening, engines are already up and running: more than 1,400 companies have already confirmed their presence, 41 per cent of which come from 48 countries. As of today, international exhibitors number more than 500, while the remaining will represent the Made in Italy campaign, which leads the innovation in many sectors of the foodservice industry.

There will be more than 1,500 hosted buyers, and, thanks to increased investment in targeting select buyers and greater collaboration with the Italian Trade Agency (ITA), there are to be many new names and an ever more complete technological mix.

The selection of exhibiting countries is ever more global, and, this year, it is to include five new additions: in addition to Bielorussia, Serbia and Liechtenstein from Europe, Egypt and South Africa stand out on the future African market: according to UN estimates, in the next few years, the continent’s GDP will increase by more than 5 per cent per year while energy requirements are growing by 38 per cent, which is an indicator of the great increase in terms of industrial activities and energy consumption.

Among the top 10 of countries most represented at the show, there’s Germany with 86 companies (an increase of 26 per cent over 2014) followed by Spain, France, the United States and a selection of other countries, including, from Europe, the United Kingdom, Greece, Switzerland, the Netherlands, Portugal, Austria and Sweden.

But the United States is truly showing amazing growth (+47 per cent), present at the show with 44 companies (compared to 30 in the same period in 2014), nine of which will be at the fair for the first time. This trend has remained constant during the latest editions, with many companies returning thanks as well to the agreement with the Commercial Service of the U.S. Department of Commerce, which has offered its official certification. At HostMilano, U.S. exhibitors find the most important port of access to the EMEA market as well as a unique way to get in touch with the Made in Italy market (in the city that most represents it), a benchmark for the industry, and to see innovations and trends in advance.

A Special Focus on North America
To bring more high-level visitors from North America, HostMilano has also entered into agreements with important industry associations. From the U.S., these include the Foodservice Equipment Distributors Association (FEDA) with 255 distributors that generate 75 per cent of sales for hotel, restaurant and cafe machines and equipment, as well as the Hospitality Industry Network, which includes 5,600 members, such as interior designers, architectural firms and contract manufacturers.

From Canada, agreements have been made with Restaurants Canada, the most important association in this industry with more than 30,000 members; Ontario Convenience Stores Association (OCSA), which represents more than 7,500 convenience stores, making for a particularly dynamic channel; and WCSA, the trade association representing Western Canada’s convenience store industry. The latter two associations together include about 13,000 convenience stores, the distribution channel expanding most rapidly in North America. The latest additions to this prestigious list include the American Society of Interior Designers (ASID), IDC – Interior Designers of Canada (IDC), the Baking Association of Canada (BAC), the Specialty Coffee Association (SCA), and the NYC Hospitality Aliance.

Whether it is for the bakers’ arts, coffee, catering, bars, furnishings or equipment, Host is the ideal place to go to find out about the latest trends in food, hospitality and retail. Every two years, Fieramilano’s halls open up a whole new world, but in between one edition and the next, the organizers never cease to work and improve the show through special events on the web and social networks, as part of an ongoing dialogue with professionals keen every day to explore their world and seize the latest business opportunities.