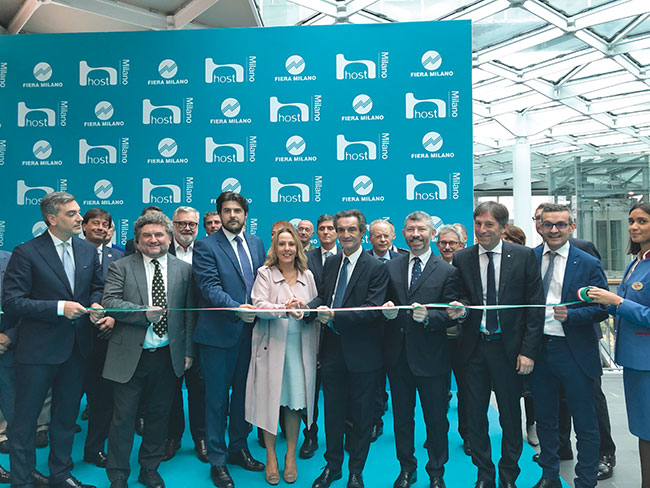 This year over 200, 000 visitors came to FieraMilano for the Host Milano event.

Host Milano, the international trade show that is focused on the restaurant and catering industry ran from October 22 to the 26th. This year, it announced that over 200, 000 visitors came to the FieraMilano to experience the best the food industry has to offer.

The International Federation of Pastry, Ice Cream and Chocolate (FIPGC), are known on the international circuit for establishing and maintaining high professional standards in global competitions.

The biennial event saw an 8 per cent increase in attendees from its 2017 run.

Bakers and pastry chefs came to challenge themselves and find inspiration among their peers. The baked goods industry was vested in learning who made the best Pannetone at the world Panetonne championships. Three categories marked that competition, dividing it into three categories:

The Best Classic Panettone in The World

The Best Stuffed Panettone in The World

The Best Decorated Panettone in the World

The crowning event was the much heralded Cake Designers World Championship. Teams from all over the world converged to FieraMilano to create cakes that defied gravity, and staggered the imagination.

The challenge was to include features of cultural and historical significance that summed up the competing country’s essence in cake form. The theme this year was “National Art and Tradition.” Each team was comprised of three competitors and one chef leading the team. Each cake was judged on the following categories: chocolate sculpture and praline, sugar sculpture, a definition of a “modern cake” pastillage sculpture and single-portion ice cream.

Poland walked away with three awards: Aside from the Best Cake Decoration, chef Jawita Woszczyńska also won the Best Taste Test award and the Best Public Exhibition, as well. Her cake featured Polish tiles, and candy figurines of Frédéric Chopin and Nicolaus Copernicus (both prominent figures in Polish history.)

Third place was awarded to Peru’s chef Monica Munante. Her cake displayed the colourful local fauna of Peru, and was topped with a beautiful confectionery sculpture of a Peruvian aboriginal figurine.

Japan was awarded The World Trophy of Pastry Championships. The Japanese team consisted of [in alphabetical order] Tomohiro Tabata, Seiji Takishima, and Tomohiro Sugawara won the gold medal and a prize for the Best Modern Cake division.

Second place for the World Trophy of Pastry Ice Cream and Chocolate FIPG went to China. The country also won awards for Best Live Decorating, Best Artistic Sculpture and a prize for Journalistic Criticism. Third place was awarded to Italy.

The Silikomart prize was awarded dually to both Romania and USA.

Take a look at Bakers Journal’s online article on the World Pastry Championships, featuring live video of the event.