Inspiring ideas to give shortbread and fruitcake a contemporary twist 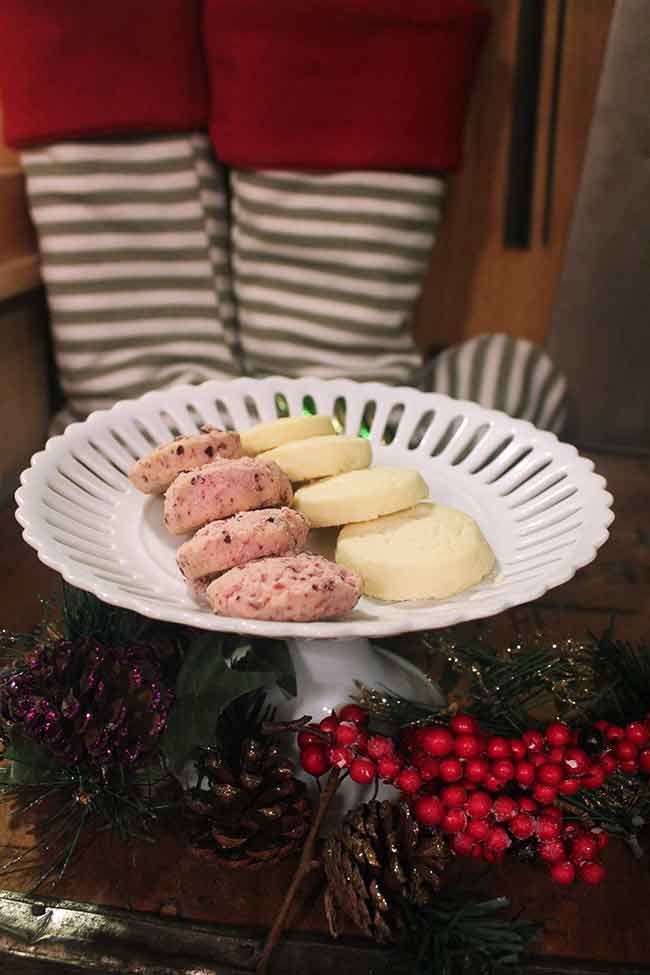 The Coach House Shortbread Company in Toronto has been baking different varieties of shortbread since 1986, and now carries a wide assortment of sweet and savoury options. Photo Credit: Laura Aiken

It’s that magical time of year, when holiday lights twinkle, shops bustle with activity, and friends and families come together. For many the holidays simply wouldn’t be complete without flaky shortbread and delectable fruitcake.

These two staples of holiday tradition have been significant on special occasions for centuries, with recipes passed down from one generation to the next. While some wouldn’t dare to play around with great-grandma’s recipes, others enjoy adding a twist to make it their own.

Ken Ilasz, owner of Ken’s Fruitcake in Montreal (and more affectionately known as “the man of a thousand fruitcakes”), opened his business eight years ago. His family developed the recipe over 150 years ago in Vienna, Austria for the Royal Court. As the years went on, he began experimenting, using the basics of his great-grandmother’s recipe and combining exciting new fruits and flavours that fly in the face of tradition. Each year, Ilasz develops a new fruitcake for his loyal clientele. This year’s creation is pistachio cranberry, while last year he pulled off the unthinkable: The Delire x Delice. It’s a three-year aged, classic fruitcake coated in carbonated maple soda batter and deep-fried until golden. His customers have come to expect the unexpected.

Ilasz’s one-of-a-kind cakes can be ordered through his web store, shipping to customers across Canada and the United States, while his Tokyo distributor ensures they reach his burgeoning Japanese clientele. Operating out of his bed and breakfast, Ilasz is trying to keep his operation small so he can devote the time and energy required to make the best fruitcake possible.

“It’s a one-man operation. I bake a few thousand cakes a year. I have 11 flavours in three varieties but always in the aggregate of 900 grams, because I’m small and I’m not set up to sell individual tiny cakes,” he explains.

Ilasz believes the most important rules to creating flavourful fruitcakes are using quality ingredients and giving them the time they deserve. His organic, sulphite-free cakes are aged anywhere from a couple of months for a “young” cake to four years for his classic offering. “It’s a question of time and good ingredients. Baking is a method that needs to be respected and as long as you have great ingredients and you give the time required to make them full of flavour and energy then they will be good,” Ilasz says.

Ilasz slices most of his dried fruit by hand into a uniform size before soaking them in various alcohols, including Grand Marnier and rum, for up to a year before incorporating them into his sought-after cakes. The entire process is done by hand, from preparation to baking to packaging.

His advice for those wanting to put their own spin on this holiday classic: “Use the best ingredients you can find and give yourself enough time. And don’t forget to have fun. Enjoy it! I’m having fun with the process.”

The Coach House Shortbread Company in Toronto has been baking different varieties of shortbread since 1986, and now carries a wide assortment of sweet and savoury options.

Sweet and savoury shortbread
Another seasonal titan of holiday baking is shortbread. These flaky, buttery cookies are reminiscent of holidays past, representing many people’s childhood favourite. The simplicity of shortbread also lends itself well to new flavours.

The Coach House Shortbread Company in Toronto has been creating exciting shortbread varieties since 1986. Over the years, the company has garnered accolades from the National Post, Toronto Star and Globe and Mail for its popular savoury and sweet cookies.

Will Coukell, owner of Coach House Shortbread, believes the longstanding popularity of shortbread comes down to its taste and global reach.

“I think it’s because it tastes so good; it’s one of those winning combinations. And it’s one of those things – I’ve discovered through research – that almost every culture has a version of a shortbread. It’s amazing how many cultures have a hard-baked butter cookie. It’s a universal food item.”

While many people automatically think of sweet shortbread, Coukell’s savoury flavours are big contenders for sales. Stilton and rosemary; Gorgonzola and pistachio; and cheddar and chipotle are popular at Coach House Shortbread.

“My experience is that when we get new customers they buy sweet and then as they stay with us, they move toward the savoury and tend to stay there. Sometimes people here don’t understand shortbread. They’re used to the grocery store product, but savoury was the original shortbread.”

Following a precise process for each batch of cookies and using specific ingredients is at the heart of the operation. Coukell uses only one brand of butter, and mixes several different flours to achieve the perfect protein balance. The product is packaged immediately after baking.

With 80 per cent of his business being done during November and December, the holidays are the perfect time of year to unveil new flavours. This year, he is launching a ginger shortbread, which is made with candied ginger imported from Thailand.

With each biscuit carefully handcrafted, it is a family affair in the bakery’s Carlaw Ave., location. The business was born out of Coukell’s late husband, Carl Stryg’s, passion for shortbread. With help from the couple’s godson, Stryg’s oldest friend, and a few other helping hands, Coukell is busy continuing on with their shared passion.

Turning to full service bakeries, The Valley Bakery in Burnaby, B.C., has been turning out noteworthy goodies, including shortbread, since 1957. In 2012, the bakery landed on Canadian Living’s list of best shortbread cookies in Canada. Jack Kuyer took over the bakery from its original owner – his father, George – in 1979 and has been creating tantalizing treats ever since.

Inducted into the Burnaby Business Hall of Fame in October, The Valley Bakery is an important and well-loved part of Burnaby’s community. Perhaps that’s due in small part to its policy of giving a free shortbread cookie to each child who comes into the store.

With over 50 feet of showcase displays in the store, Kuyer devotes more than a third of this space to his cookie varieties. He has three versions of shortbread alone: a spritz cookie, where shortbread batter is piped onto a pan and finished with various colours of fondant or jam tops; a shortbread finger, which is the top-seller during the holidays; and a seven-inch shortbread round, representing the traditional Scottish flaky-style shortbread. The secret to his coveted cookies comes down to consistency, both in the process and with ingredients.

“To me, you have to know what you want and know what your customers want. Come up with your recipe and then make sure that you stick to the same process so that you get the same quality from every batch. If you don’t get that same quality, avoid giving it to the customer,” Kuyer suggests.

Holiday classics like shortbread and fruitcake will never go out of style. Don’t be afraid to offer versions with your own creative spin. After all, the holidays are a playful time of year!