Features Business and Operations Marketing
Hashtagging your way to the top

Using hashtags to help grow your brand can be an easy and effective way to make the most of your social media messages. 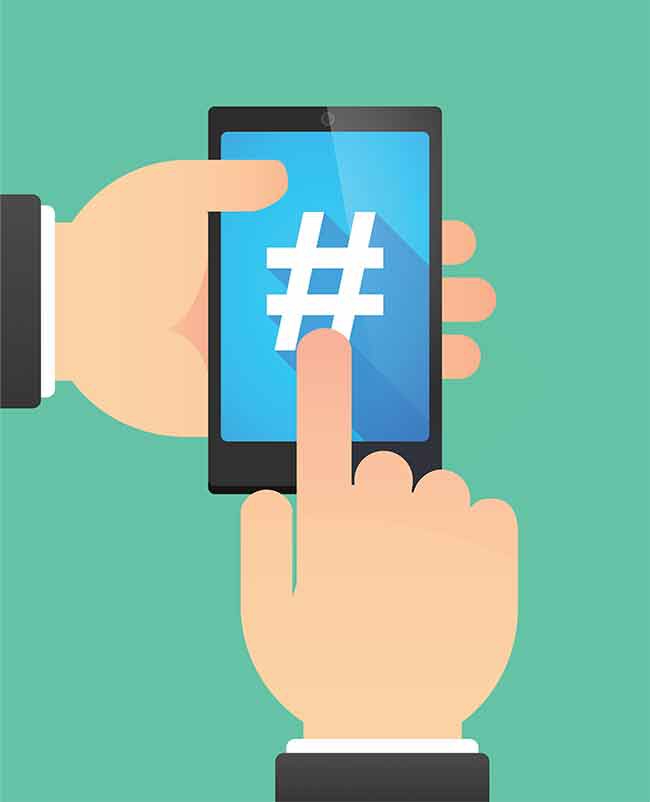 Add a hashtag and you start picking up momentum because the post has the potential of being seen – and retweeted – by any number of people. Photo: Fotolia

Not so many years ago, people paid little attention to that pound sign on the computer keyboard. You know, the one that looks like this: #.

Then along came Twitter, and what we have come to call the “hashtag”, and social media marketing was changed forever.

Yet not everyone takes advantage of hashtags the way they should, and that’s unfortunate. If you are not using hashtags, you are missing out on exposure for you and your brand.

BE PART OF THE CONVERSATION
When you are on social media sites such as Twitter or Instagram, your goal should be to become part of the conversation. The hashtag allows more people to find your contributions to that conversation. Without them, you miss out on lots of eyes that could be viewing your content.

For example, let’s say 1,000 people follow you on Twitter. Not counting retweets, only 1,000 people will see your posts if you don’t use a hashtag.

Add the hashtag, though, and you start picking up momentum because the post has the potential of being seen – and retweeted – by any number of people. A common hashtag, such as #love, can position your post to be seen by potentially millions of people.

But be warned. While there are great benefits to hashtags, there also are pitfalls. Hashtags don’t come with exclusivity. Anyone can use them, so a hashtag can become a weapon that works both for you and against you. Critics of your brand, or just the usual assortment of Internet trolls, may attempt to hijack your hashtag, putting you or your business in a bad light.

A prime example of a hijacked hashtag happened a few years ago when McDonald’s, apparently hoping for a flattering conversation about the restaurant chain, introduced #McDStories on Twitter. #McDStories went viral, but not in a good way, as the Twitter world had a field day tweeting unflattering tales of their alleged bad experiences with the restaurant.

Don’t let such cautionary tales deter you, though. March boldly into hashtagging, but as you do keep in mind these suggestions for getting the most out of your efforts.

Use proprietary hashtags: One of the advantages to a proprietary hashtag, such as the “Orange is the New Black” hashtag, #OITNB, is that it is linked directly to your brand. These hashtags typically are not used as widely as a more generic hashtag, but the goal is to brand yourself through the hashtag with the hope it could go viral.

Don’t overdo it: A post littered with too many hashtags can be difficult to read, so your message might become obscured as your followers see what appears to be gibberish. Perhaps you saw the skit Justin Timberlake and Jimmy Fallon once performed in which they spoofed the device’s overuse by lacing their spoken conversation with seemingly endless hashtags. It was hilarious and annoying all at the same time.

LEARN THE DIFFERENT ETIQUETTE
A different etiquette exists on Instagram, though, and most Instagram followers will tolerate excess hashtags.

Meanwhile, although hashtags can be used on Facebook, there’s little reason to include even one. That’s not the way people use that social media site.

Think geographically: If you are a local company that depends mainly on local clientele, a hashtag that links to your location works well. Hashtags such as #Seattle or #Bangor drop you into numerous conversations about your hometown.

Since social media has become such a vital element of any comprehensive marketing strategy, understanding all of the nuances is critical.

A hashtag may not look like much, but it’s really a powerful tool that is a double-edged sword. If used correctly it can greatly bolster your marketing reach. Used incorrectly, it can have adverse effects or unintended consequences. With social media, your hashtag is your brand, so use it wisely.

Jay York, senior digital marketing strategist for EMSI Public Relations (www.emsincorporated.com), is an Internet marketing expert with extensive experience in social media marketing dating back to the early days of MySpace and LiveJournal. Since graduating from the University of South Florida Business School, Jay has worked as marketing coordinator for an international IT training company; business development and branding manager for a startup restaurant management group; and CEO of his own social media management firm.