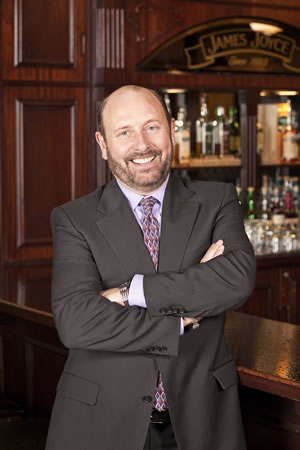 With 33,000 members, the CRFA
is one of Canada’s largest business associations and represents the interests
of the $60-billion restaurant and foodservice industry.

“I’m honoured and thrilled to
be representing one of the most innovative and exciting industries in Canada,”
says Curran. “With more than 80,000 locations and one million employees, we
make a tremendous contribution to the Canadian economy and society. I believe
that with the entrepreneurial spirit of our industry, we can do even more.”

Curran and his wife Anne
opened the James Joyce in 1997. It was the first authentic Irish pub in Alberta
— from the food and beverages to the décor, much of which they sourced in
Ireland. Today this popular 225-seat establishment employs 40 people and serves
what has been called the best pint of Guinness in Canada.

Born and raised in Ireland,
Curran emigrated to Canada in 1979, at the age of 20. He gained a wealth of
experience in both countries before venturing into the pub and restaurant
business by opening the James Joyce. As a teenager he worked in Irish pubs, as
well as for the Guinness company, and in Canada he worked his way up from
general sales manager to chief executive officer of a $30-million brewing
company.

In addition to his leadership
role with the CRFA, Curran is president of the Calgary Irish Chamber of
Commerce and is a past participant on Calgary’s 4th Street
Redevelopment Board and the Calgary Downtown Association. He is also sole
proprietor of several other unrelated companies.

CRFA was established in 1944,
and its top priority is government affairs – advocating on behalf of
foodservice operators. The association also offers money-saving services for
members, industry research and information, and hospitality industry trade
shows.