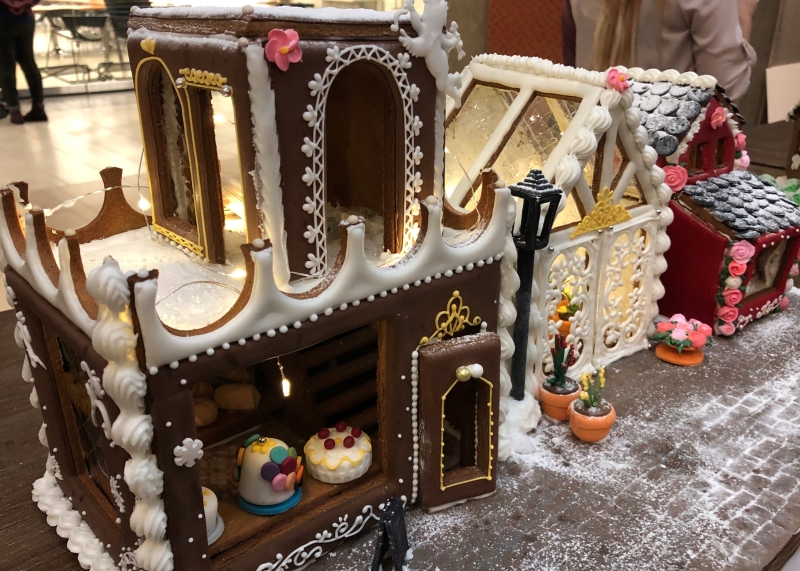 Three winners were selected by a panel of four judges, among them Chef Joanne Yolles and Dufflet Rosenberg of Dufflet.

Third place was awarded to Lexi Orbanski, who won the $500 prize. Second place went to Taylor Stevens, with a $750 cash prize. First place went to Seungjin (Roy) Lee, with his gorgeous three-building set, complete with miniature interiors made with handmade candy. He was awarded the $1000 prize. All three winners were also awarded culinary arts textbooks published by Wiley.

Chef Sue Fleming had been organizing the Gingerbread Contest for six years, now. “I make a huge batch of the dough, give the students the recipe and let them make more if they need it.” Fleming adds, “More is not necessarily better. You should keep in mind that there’s other elements to the contest than the size or amount of houses. Some will have more intricate piping or an original concept, too.”

Chef Yolles recommends next year’s contestants not to stand like a sentinel by their creation. “We need some space to observe and discuss the presentation.” Dufflet Rosenberg sighed, “I really wanted to love the City Hall Toronto gingerbread one…but it didn’t have much to it. It needed more.”

All the gingerbread houses were judged on three criteria: Originality of concept, demonstration of skill and structural integrity.

You can see some of the creations here, in the gallery: