New twists on old classics: Are they traditional, modern or ‘future perfect?’ 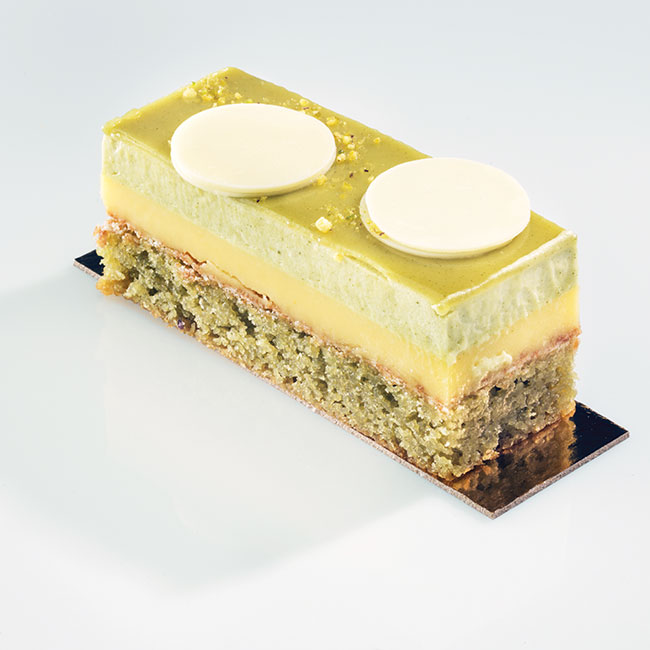 Patisseries across the country, from long time established businesses, to newer start-ups are serving both classic French desserts with bolder flavours and unique, often multi-cultural taste profiles. Recently, these French desserts have become the most beloved sweet treats on Instagram.

French-born pastry chef Franck Buiron, and owner of Atelier Patisserie, the Olympic Village neighbourhood of Vancouver, British Columbia, shares his thoughts as to why French desserts have gained in popularity. “In France, we have always been a bit ahead of the game. Not to sound pretentious.” he adds, “But, our desserts are very picturesque. People like to photograph them. We use less sugar in French desserts and we make them smaller than in North America.”

His patisserie has only been open for two years, yet this new group of French dessert devotees are clamouring for the classics.

His most popular dessert is the Paris-Brest, “It’s all about the cream,” says Buiron. He uses a crème anglaise set with butter, then adds Italian meringue, pastry cream and praline paste for the filling. “I try to take what is traditional and then work it as much as possible to get the best taste and flavour.”

Another in-demand classic dessert is the lemon tart, although Buiron chuckles and says the filling’s origin isn’t exactly French, but English. (It was the Americans that first placed it in a crust and then added the meringue).

He creates both texture and a design element on lemon tartlets by adding swirls of meringue just along the edge of one side. Large lemon tarts have rounded peaks around the entire circular circumference.

“Sometimes, as a French pastry chef, I question some pastries that claim they are French today. I think, ‘That is not French!’ But, then again, it is nice to see and it can be inspiring,” says Buiron. Case in point: his matcha passionfruit cake, with a financier matcha base, a wafer of white chocolate, passionfruit curd, finished with matcha mousse.

Located beside Saint Joseph Oratory, in Montreal, Quebec, a shrine to the namesake, that welcomes over 2 million visitors per year, Duc de Lorraine, which opened in 1952, is a prime location to enjoy classic French pastry. “One bite will transport you back to the magical world of France,” says Victoria Sorenson, owner of the patisserie.

“Trends will come and go—cupcakes, cronuts, hipster donuts, but a beautiful mille-feuille is a piece of art,” says pastry chef Bruno Cloutier.

And the mille-feuille reigns supreme, for customers who come to select from a showcase of over 20 individual types of pastries, and other delicious larger cakes and tarts.

“For our mille-feuilles we offer a classic version, and double,” says Sorenson. “The puff pastry is made using only butter. It’s rolled many times. Our double cream is with separate layers of custard and whip cream using 35 per cent cream. The classic version is with custard, and most popular between the two,” Sorenson explains.

Creating a smaller, bite-sized version of original, “family-sized” pastry puts a spin on what we currently think of what a cake should be, like La Boule’s vanilla and sour cherry cheesecake.

“Christmas is my favourite time of year in the store,” says Sorenson. “Many families order year after year, generation after generation.” She adds that most will make a special order for a traditional Bûche de Noel (available in Bûche Poire et Marrons, Bûche Royal Bûche au Café and Bûche Vanille) and mini pastries– bite sized classics; mille-feuilles, éclairs, religieuses and assorted tarts.

At La Boule Patisserie, in Edmonton, Alberta, owner and pastry chef Jennifer Stang, points to her classic lemon tart as a top seller. “We use two kinds of lemons in the curd,” says Stang, “the regular kind and Meyers lemons.”

The curd sits in a crisp buttery crust and it’s finished off with a passionfruit glaze, “It provides just the right hit of sour,” she states.

And then there are a whole variety of eclairs, “My favourite is the Black Forest,” she says. The choux pastry is filled with kirsch diplomat, with added cherry kirsch compote and topped with dark chocolate glaze and chocolate shavings.

And Stang has transformed an American classic into a very French looking pastry, “I know people love cheesecake,” she says. “This one has all the elements of a New York-style cheesecake, but much sexier.” La Boule’s vanilla bean sour cherry cheesecake is a light and airy dome shaped cheesecake, complemented with a sour cherry compote, that sits on a graham cracker cookie crust.

And then there are specialty shops, the kind of places that take one product that is found in a traditional French patisserie and expands it beyond its limits.

Quelque Chose Patisserie, a lovely little place for the much-loved macaron has not only one, but three locations in Ottawa, Ontario. It also has three owners. The two sisters— Julia Dahdah, executive head chef attended the prestigious École Grégoire-Ferrandi in Paris, while Michelle Dahdah, head chef, studied at Le Cordon Bleu, in Ottawa. Julia’s husband, David Seba takes care of the business and financials.

“A good macaron is a little crunchy when biting it, and then softer and chewy in the inside,” says Julia. “You should feel the texture and delicate taste of the almonds, but at the same time, the flavour of the macaron filling itself should stand out.”

When it comes to the top selling macaroon flavours Seba says, “It’s definitely the salted caramel macaroon. It’s always number one. People will buy a full box of 12 to take home.”

The two other flavours that round out the top three are the pistachio macaron and the raspberry dark chocolate macaron. Other fruity flavours include lemon poppy seed; strawberry and cream or cherry. And then there are beverage inspired macaroons like jasmine tea; cappuccino; caramel London fog; or matche latte. For flavours kids and the young at heart can’t wait to sink their teeth into, there is bubble gum or M&M macarons.

Passionfruit adds a bit of Asian flair to this classically European lemon tart.

Nugateau Patisserie, with three locations in Toronto, specializes in eclairs. “I have always enjoyed both eating and making them,” says pastry chef and co-owner. Atul Palghadmal, who studied at Ottawa’s Cordon Bleu.

His all-time favourite éclair is classic vanilla, hence the creation of the vanilla pecan éclair, now on the menu. It contains vanilla seed cremeux, vanilla glaze and caramelized pecans.

Éclair flavours change twice a year on the menu. Fall and winter brings out the dark rich chocolates and nut varieties, while spring and summer are reserved for more citrus and fruits. For example, the lemon and kalamansi cream éclair, with white chocolate glaze and torched meringue, or blueberry violet éclair, with blueberry cremeux, whipped violet ganache, chocolate petals and fresh blueberries.

The most iconic éclair, however, is evocative of childhood memories and it’s simply entitled Cookies and Milk. It’s a chocolate eclair filled with white chocolate, powdered milk enriched ganache, dipped in dark chocolate and rolled in chocolate cookie crumbs, that have been made-up, baked and crumbled in house.

From millefeuilles, éclairs, to Paris-Brests, and the ever-popular macaron, French desserts are here to stay. Given the number of new shops across Canada it will be interesting to see how each patisserie differentiates itself from the crowd.