How to create a successful charity event 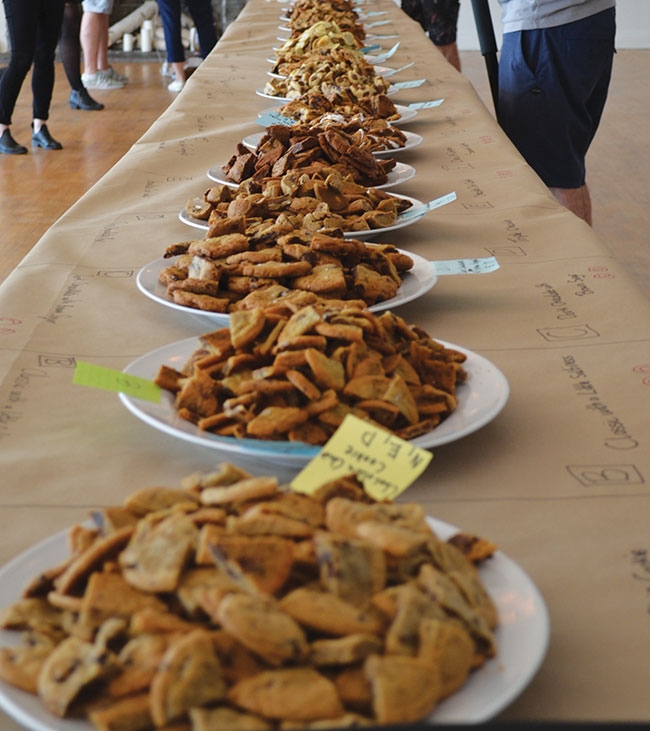 This popular fundraiser was first launched in New York City, where Chocolate Chip Cookie-Off 2017 (CCC2017) raised US$30, 000 for local charities. Sol Orwell, the organizer, was bowled over by how this event was greeted with joy. He knew he had to bring it to Canada. How does an event go from a small idea to a big success?

“Honestly, the big one was just being organized,” confessed Orwell. Their system of choice was an online, shareable spreadsheet that all volunteers shared via cellphone. Each baker was assigned a letter of the alphabet, which corresponded to a bakery or baker, and listed possible allergens.

The anonymous platters were placed between squared off lines on a kraft paper-covered table. The baker’s assigned letter, the names of the cookie and possible allergens were written down under each platter of cookies.

La Dolci Cupcakes were among the participants. Lisa Sanguedolce, the owner of La Dolci gushed, “it’s fabulous. So much fun.” What was interesting was that not one of the professionals appeared to complain about being pitted against amateurs, however, gifted they might be.

Knowing the value of feedback, Orwell queried the contestants about their experience after it ended. “I was like, tell me: I want to know every little, small detail,” stated Orwell. “Not a single person complained that there were amateurs. Every single person was like, “this is crazy, we raised so much money, we had so much fun!

“I was bringing entrepreneurs together, which was nice, but I want people to come together over food. I know that to a level, they do, but there is that schism between bakers, pastry chefs and chocolatiers.  I would say 99 per cent of the people were very happy.

Originally, the charity was to raise funds for Sistering, Business in The Streets and the Community Food Centres of Canada. However, CCCO2018 was so successful, it surpassed its goal by raising $120, 000: Enough to add a fourth cause to their list of recipients.

“The money is transferring to Sistering, and Business In The Streets, and I said that originally, I didn’t want to give more than $30 000 per charity, so now, we’re going to be transferring the money to Matthew’s House, which helps immigrants and refugees.”

Orwell chose multiple charities to mitigate dependency on any one donation, as well as giving the opportunity to donate to several worth causes at once. “I’ve got a lot of interests,” explains Orwell. “I care about food sustainability, I care about women’s education and support systems and entrepreneurship, I care about immigrants, being one myself. How do you pick just one? It’s kind of crazy.”

The challenge lay in finding a single charity everyone agreed on. Orwell adds,“Different people had different motivations, and since I have different ones, I decided to split them into four, this way.”

Contact people with similar interests
“Honestly, the other bakers were the nicest, most amazing people, ever,” stated Orwell. “I would say almost all of them made extra cookies specifically to be donated. For instance, Lindsay [Haddock] formerly of Scaramouche, now at Circle and Squares, she brought three big cookies for the cookie-off, and one of the big boxes was only for charity. A lot of these bakers made way more cookies than they needed to.

“The hard part is not including the bakers, the two hard parts are finding the location to have it and then selling tickets. And when I say ‘selling tickets’ when people think, “aww, this dude’s selling tickets for $600 dollars…”

Know your clientele: Charge a fair price
“I can charge this much because I’ve been around for a very long time. I’ve done a lot of these events. But, if you charge ten dollars, twenty dollars, and you do it for like, a group of fifty people, it’ll go like this [snaps fingers.] It will be so, so easy.

“It’ll be like a bake sale, but people will come together to be a part of something bigger. Like, last year, when I did it, we raised $1200 dollars. Total. And we had twenty-seven professionals compete. And they were super happy to participate.”

Orwell advises bakers or fundraisers to know their market, but don’t be afraid to mark the ticket prices up when popularity soars. “Sell the tickets at a price that makes sense. Then, slowly, but surely, make the tickets more and more expensive. In a time of recession and scarcity, charging a lot may seem reckless. Orwell recommends using exclusivity as an advertising technique. “At any given time, people will pay more for exclusivity,” explains Orwell. “This was not a public event” Orwell believes the reason behind this event’s popularity was the conviction that the guests would find like-minded, fun loving, food loving souls. “People who make money, but aren’t about the money.”

Don’t be afraid to just ask
“You just ask. …people in the food industry are the most giving people I’ve ever come across. That’s not the hard part,” advises Orwell. “You just need to find an interesting venue, and sell the tickets to make it happen.”

If you’re lucky enough to know someone with an attractive property they are willing to rent out reasonably (or for free) Orwell adds that you shouldn’t be afraid to ask if they are willing to donate their time or rental fees to the cause in exchange for advertising or donation funds.

Consider a unique location
Orwell believes that many venues are more than pleased to take part in food-related charities, citing “wedding and corporate events fatigue.” What we’re doing is very different. It’s fun and unique. If anything, venues want us at their place, because it’s fun.

“When we did this in New York, we did it in The Strand bookstore. As an employer, I’m saying, “eat some cookies! Don’t not eat cookies – go for it!” So, we always work around people who are supporting us, all the people who were working the bar at the Toronto cookie-off, we were like, “dude, go have some cookies. If you want, I’ll go grab you some cookies. Employees love it because it’s a fun event.”

Start with a small goal
“People think you have to raise this huge amount, like, 100,000 Canadian dollars, like you’d need a massive number,” Orwell shakes his head. The first charity food competition was held at a friend’s house, the chef of Pizza Libretto. “It was a potluck version. We said, ‘if you’re not coming, you have to donate $20 dollars.’ I think we raised $180 or $200. It was just a bunch of us, just having fun.

“People keep thinking you have to do these huge events,” Sol admonishes. “No, no, no – it all adds up, right? If you get $250 here and $250 there, it turns into hundreds of dollars, and six months later, charities get $500 that they wouldn’t have gotten if you’ve never done this.”

Don’t underestimate the fun factor
“Do whatever you want, and get people together.” Orwell believes that people having a genuinely good time will be its own advertisement for future events. Having like-minded attendees paired with excellent food gathers a lot of attention online.

“When we did our original food-off, it wasn’t even a fundraiser. It was never originally about money, it wasn’t about charities, it was just about bringing people together.

“And then, when people saw pictures of the fun we had online, they’d say, “hey I want to get in on that, I want to be a part of this.” That’s when it blew up. I have the leverage and I have the connections, but everyone has some connection and some leverage in a community. Maybe some can’t charge $500, so, maybe charge $70. Maybe charge $7. Who knows? But at the end of the day, the value comes through, and that’s how you raise money.”