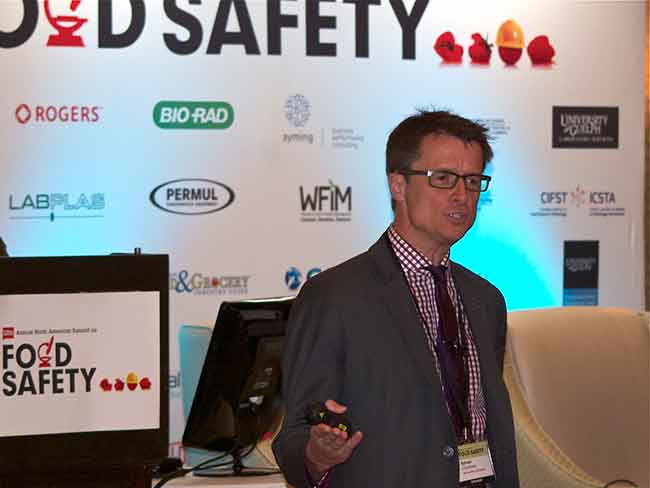 Sylvain Charlebois from the University of Guelph warned of the global threat of food fraud. Photo: Doug Picklyk

Among developed nations, consumers can be reassured that existing and emerging food handling safety standards are working hard to keep populations safe. But as attendees at the recent 12th annual North American Summit on Food Safety learned, the most significant threat to our food supply today is food fraud.

“I can tell you that everyone in this room has purchased a least one counterfeit item, and even the retailer who sold it didn’t know,” said Sylvain Charlebois, professor with the food safety institute at the University of Guelph. “It’s definitely a food safety issue.” He was speaking to more than 150 registered attendees at the event, held April 20-21 at the Old Mill in Toronto.

Involved with a global food safety benchmarking program since 2006, Charlebois is optimistic on the overall trends in food handling practices. He reported that in the most recent 2014 world ranking on food safety performance, Canada ranked first among 17 industrialized countries, improving from fifth in 2008 and fourth in 2010. Despite his optimism, he voiced a warning: “The one risk that is becoming a threat for industry and governments worldwide is food fraud.”

Of the 20 presentations delivered at the event, two dealt specifically with the food fraud threat. Gordon Hayburn, vice-president of food safety and quality with Trophy Foods, gave a talk on food fraud, walking attendees through steps to conduct an internal vulnerability assessment to identify potential weak links in their supply chains.

Common fraud cases include the replacement or substitution of ingredients with cheaper alternatives, the undeclared dilution of genuine ingredients, deliberate mislabelling, false claims on product origin or even counterfeiting of well-known brands. Hayburn suggested food fraud is a $50 billion global problem, and he cited claims that 10 per cent of the U.S. food supply may be adulterated.

The most frequent at-risk foods tend to be higher-priced items including olive oils, grains, spices (especially saffron), honey and maple syrup. If the price you’re receiving from suppliers is too good to be true, it’s not real, he said.

He recommended identifying vulnerabilities in your supply chain, shortening your chain and developing close relationships with your suppliers.

The final presentation at the summit, delivered by Miriam Firth, director of quality assurance and food safety with Skilcor Food Products, was focused on food defence and preventing the deliberate contamination of food.

Firth noted comprehensive traceability records are one way to effectively react to the discovery of adulterated ingredients in food. She cited a recent Interpol investigation that seized over 10,000 tonnes and one million litres of hazardous fake food and drink from operations across 57 countries. Products included almost nine tonnes of counterfeit sugar contaminated with fertilizer and 85 tonnes of olives painted with copper sulphate to improve their colour.

Be aware, warned Firth. “I am passionate that consumers should get what they pay for.”

Mitigating food safety risks for Canadian consumers is the responsibility of the Canadian Food Inspection Agency (CFIA). On the first day of the summit,

Nicole Bouchard-Steeves, executive director with the CFIA, provided an update on the agency’s progress in modernizing its systems and becoming a “digital-first” operation. “We need to be more nimble,” Bouchard-Steeves said.

In November 2015 the CFIA began rolling out a new integrated agency model on the inspection side, and at the end of this year CFIA will launch its new electronic service delivery platform, an online portal giving industry easier access to the agency. The digital platform will allow users to view their documentation, monitor progress, request export certificates and more.

No information was forthcoming from the CFIA on any impending regulations to be tabled as part of the Safe Food for Canadians Act that was passed in 2012. Discussions related to new regulations from both the CFIA and the U.S.-based Food Safety Modernization Act (FSMA) were sprinkled into many talks over the two days.

On the first afternoon, attendees were very engaged during a peer-to-peer discussion focused on how best to adapt and align with new regulatory expectations. Improving employee engagement and formalizing education were common recommendations.

Shannon McCoy, director of food safety and quality with Maple Leaf Foods, addressed the work of Safe Food Canada (SFC), which is a collaboration of industry, government and academia. McCoy explained how SFC is establishing the framework for a competency-based learning process for various roles in the food industry. The Canadian-based curriculum is in development now and will be followed by recommendations for teaching, national evaluation and accreditation standards.

Sylvain Charlebois from the University of Guelph warned of the global threat of food fraud.

Since the launch of the Global Food Safety Initiative (GFSI) in 2000, safety standards along the supply chain around the world are improving. A retail panel including Katherine Di Tommaso, director of food safety and quality assurance with Wal-Mart Canada, and Jay Shirdoker, former senior quality assurance director with Loblaw, highlighted the importance of suppliers adhering to standards. Both Di Tommaso and Shirdoker acknowledged the positive impact GFSI has had on the industry. At Wal-Mart, GFSI is recognized and supported from the CEO and board of directors on down and all suppliers to Loblaw’s President’s Choice brand must be GFSI compliant.

The retailers also said smaller, non-registered vendors need to understand what changes are coming down through CFIA, and they need to make sure they’re up to the standard quickly. “Because otherwise we won’t be able to sell their product,” Di Tommaso said.

With small-scale producers in mind, Keven Kane, co-director at the Centre for Social Business with the Salford Business School at the University of Salford, introduced a food safety standard developed in the U.K.

Local growers and producers are audited to meet a food safety standard that encompasses legal requirements and meets the demands of food buyers without requiring the exacting measures of GFSI. The program helps local and regional food producers get their products on the shelves of major grocers. “And the supermarkets love it,” said Kane, who encourages Canadians to copy the model.