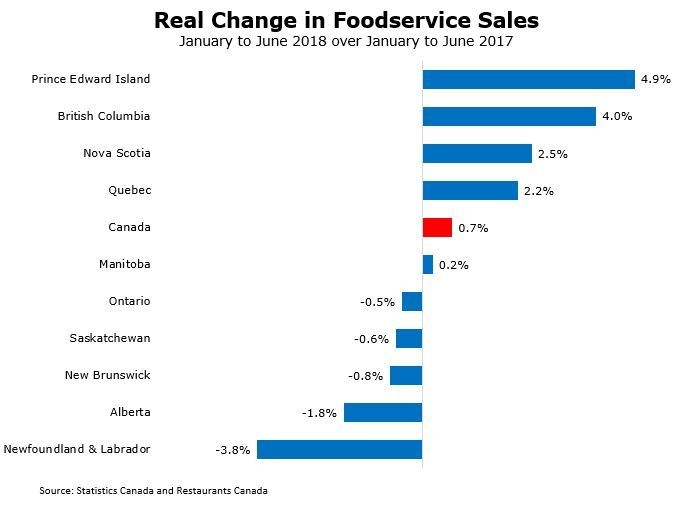 Food service is up by 6.4 per cent compared to last year, but the increase in sales is attributed to increased prices on menus than increased traffic, according to Restaurants Canada.

Between minimum wage increase and tariff charges on certain restaurant supplies, Canada’s restaurant industry was forced to increase their menu prices by 3 per cent or more, depending on the province. The association reports that this is the largest menu price increase Ontario has experienced since the introduction of the GST in 1991.

This means that despite the rate of growth that both full service and quick-service restaurants have experienced in the first six months of this year, real sales only rose by 0.7 per cent in 2018. In fact, Newfoundland and Labrador experienced a 3.8 per cent dip in their sales since January.

Due to British Columbia and Prince Edward Island’s growing population and strong economic activity, they had seen an increase in sales by 7.3 per cent and 6.5 per cent, respectively. However, Ontario’s industry reported a 6.1 per cent increase in sales in the fist half of 2018, real sales dipped by 0.5 per cent.