Stay informed on new legislation and be proactive, say experts at NSF-GFTC symposium 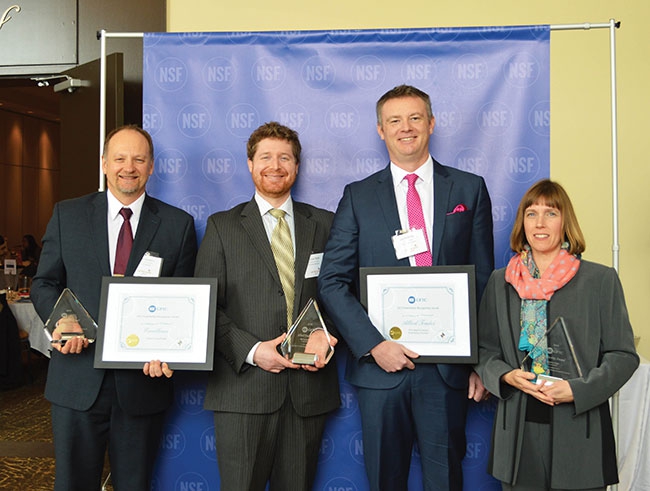 Food industry experts gathered at the NSF-GFTC Safe Food Canada symposium Feb. 26 in Brampton, Ont., to get up to speed on food safety developments.

Carol Zweep, manager of packaging and food labelling, consulting and technical services for NSF-GFTC, outlined proposed changes to nutrition labelling put forth in July 2014. Serving size will be more consistent, “amount” will be referred to, standard household measure will be used and labels will likely list the number of cookies, for example, that a customer would typically eat. Health Canada also is proposing changes to reference amounts, including a change for bagels from 55 to 85 grams, and for muffins from 55 to 115 grams.

Proposed changes to the Nutrition Facts Table (NFT) include references to the daily value (DV). For example, sodium’s DV is expected to decrease from 2,400 to 2,300 grams in line with U.S. changes. Daily values for fats are proposed to rise from 65 to 75 grams. A separate DV is being proposed for infants and toddlers.

The NFT will look a lot cleaner, Zweep said. Because all sugars will be lumped together, the ingredient will move up near the top of the table with other problematic ingredients. One concern among manufacturers is that it is not possible to calculate added sugar, so manufacturers must be careful in their claims, she said.

Zweep estimated it may cost as much as $3,000 per product to make the changes proposed by the U.S. Food and Drug Administration’s Food Safety Modernization Act.

Jennifer McCreary, NSF-GFTC’s technical manager of training services, pointed out that the most significant change proposed by the FDA’s Food Safety Modernization Act is the new powers given to the FDA itself. To investigate an organization, the FDA need not wait for a complaint but could act on reasonable belief that standards are not being upheld. This gives industry more responsibility to be preventive, McCreary said. Those who import from the United States need to be aware of section 301, the Foreign Supplier Verification Program, she said. Under this section, they could be audited.

Although these changes are not technically final, McCreary urged importers to be proactive in meeting the proposed standards.

Keith Mussar, of Keith Mussar and Associates and vice-president of regulatory affairs for the Canadian Association of Importers and Exporters, spoke about the effect of the legislation on the import and export of food between Canada and the U.S.

“This is the first time both Canada and the United States are undertaking fundamental changes to their regulatory framework,” Mussar said, adding that it’s important to identify “non-resident importers” who import from the U.S. without having residence there. These companies represented $13 billion in trade in 2011.

Mussar suggested importers read the regulations carefully. Chances are they will require an export certificate. As for manufacturers, they will need to be licensed, something that used to be the responsibility of distributors. Global Food Safety Auditing alone will not be a sufficient measure.

The good news is there will be lots of guidance on the changes, Mussar said. These regulations will allow more room for interpretation because they are outcome-based, not prescriptive.

Because what was once trade law has now become criminal law, hiring a broker to handle importing and exporting may not be a practical options as brokers may not want to take on increased legal responsibility.

His advice? Be connected to an organization that is following in detail developments in these regulations.