Secrets to a perfect pie 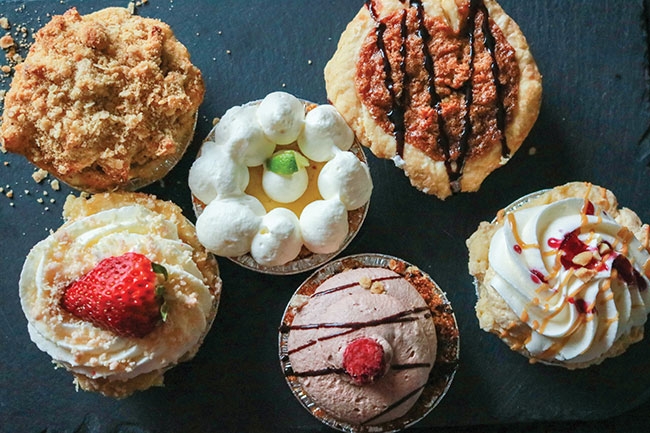 There is just something magical about the summer fruit from the lush Niagara Region, in Ontario. It has inspired many bakers to make their very first pies. In fact, some have gone on to become professionals, with thriving businesses, using the techniques they have learned along the way to make perfect pies.

“Everybody loves pie!” exclaims Wanda Beaver, owner and head baker at Wanda’s Pie in the Sky, the 35-year old business, in Toronto’s Kensington Market. She reminisces about an idyllic childhood growing up in St. Catharines, Ont., in the fruit-rich Niagara Region. A sour cherry tree in her own backyard inspired her as a make her very first pie. She was just nine years old.

“The perfect pie is a balance of flaky pastry and juicy filling. It has to have that contrast,” says Beaver. Today, the sour cherry pie is the top seller in her shop, except when it is peach season. “Niagara peaches are the best,” says Beaver, “And are the most sublime reason to live in this part of Ontario.”

Off season Beaver uses frozen fruit, but never frozen peaches. In season, peach pies fly and the shop makes peach ice cream to top them off.

All fruit pies, except for apple have a woven lattice crust. “We like pies to have a homemade look, because that’s what they are. And you want to be able to see the fruit.”

So just how is the perfect pie crust made? Beaver uses a mix of butter and non-hydrogenated shortening for the fat. Making the dough by hand, she uses a traditional pastry cutter, which gives her more control than using a food processor. The secret she says is to blend the fat and flour together well, before adding the water, to create an even mix. “Always use cold butter,” advises Beaver, “And in the summer refrigerate the flour.”

High gluten flour will cause a tough crust, while low gluten flour will cause the dough to be weak, unable to support the filling. In Beaver’s book entitled, Wanda’s Pies in the Sky: Pies, Cakes, Cookies, Squares and More (currently out of print, although Beaver does contemplate updating and republishing) she writes that Canadian all-purpose flour is the best for pie crusts. It has the perfect balance of high and low gluten flour, with slightly less gluten than the American version. Her preference is unbleached flour.

After makeup, Beaver wraps the dough in plastic and lets it rest for 20-30 minutes in the refrigerator. Then, she rolls it out on a counter top liberally sprinkled with flour, keeping the dough moving by rotating it a bit, after a few rolls of the pin.

At Wanda’s Pie in the Sky, the fruit is not precooked and cornstarch is mixed in with the fruit to thicken, “It produces the best, glossiest baked texture.” As for baking, Beaver suggests, “Start with a hot oven at 375 F then reduce it by 25 degrees. Bake well, until the fruit bubbles in the middle.”

Over at the Itty Bitty Pie Company, in St. Catharines, Ont., co-owner Pam Nicholson shares her thoughts. “We believe pies always taste best when they are baked in your own oven.”  That’s why they sell their nine-inch family-sized pies frozen.

“We tell our customers not to thaw them before baking,” says, head baker and co-owner Tara Nicholson. Why? Pie crusts bake that much crisper directly from frozen.

The mother and daughter team their business several years ago. But, Tara didn’t learn pie baking from her mother she learned it at high school in a food and nutrition course. The class should have been called Pie Baking 101, because according to Tara, that’s all they ever did. And while later she continued baking pies at home, she studied graphic design.

Her mother finally convinced her that pies were her future. And so, the team set up a booth at the St. Catharines Farmer’s Market, before setting up shop in the city.

Itty Bitty Pie Company sources fruit from local farms and farmer’s markets. Once June rolls around, customers go wild for strawberries. “We make strawberry rhubarb pies, because both are in season at the same time. It adds both sweet and sour flavours.  The top crust is lattice, so you can see the fruit,” says Tara.

Like Beaver, Tara only uses fresh peaches never frozen, so her peach pies are only available in season. At which point, the peach pie is the top seller. “We make our peach pies with a crumble of flour, brown sugar, oatmeal and butter. Cinnamon is added directly to the peaches,” Tara notes.

But the most popular pies at Itty Bitty Pies are the 3-inch individual pies, made by the thousands, using a pie press. “When we opened the business cupcake shops were really popular. So, I thought, ‘why not pies.’”

Flavours change daily, which gives Tara the opportunity to experiment. These mini pies are baked for customers to take home and they usually leave with a box of least a six mini pies. Apple crumble is the most popular mini fruit pie variation.

In the winter, Tara turns to frozen fruit, which she thaws out first. “I keep the juice, because that’s where the flavour is. I just add more flour to make up the filling.”

James Fink a.k.a. Jay the Pie Guy in Port Colborne, Ont., just moved to a new location double the size of his previous location — all in a whirlwind of three years since he first started selling his pies at the St. Catharines Indoor Flea Market. Open only 5 days a week, with no digital profile beyond a Facebook page, he still manages to sell 400 eight- inch pies a week.

“We use only half a cup of sugar per pie,” says Fink.  But unlike other pie bakers, Fink precooks his filling, adding cornstarch immediately after the sugar, to quickly boil the filling, without breaking down the fruit too much. “When we cook the filling down, we are making sure that every pie filling is consistent, ” he says. Most of the pies at Jay the Pie Guy have a top crust or a crumble made with butter brown, sugar and oats.

He used to brush his pies with an egg wash to give colour, but felt it changed the flavour of the crust.  “I now realize it’s not about the way the pie looks, but the way it tastes.”

One trend Fink notices is more requests for vegan pies.  He uses all vegetable shortening in his dough and now without egg wash, vegans can enjoy his pies too.  “But, I haven’t yet attempted a gluten free pie,” he says with a laugh.

Pies are pure comfort foods that make good use of summer fruit. They are a casual dessert indulgence, filled with the nostalgia of home.