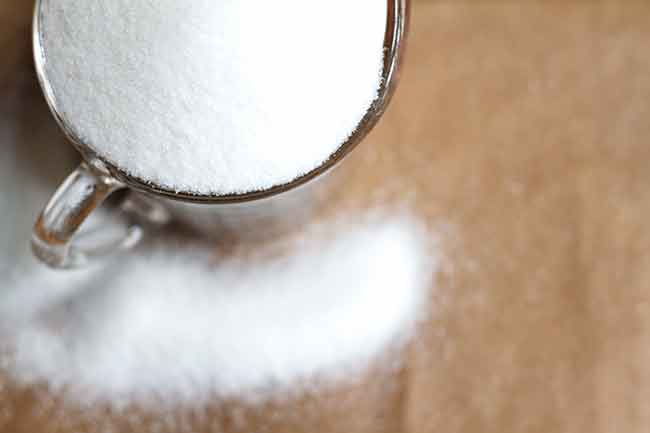 We all know that sugar is essential for the sweet taste in baking. However, sugar goes beyond sweetness and is an important ingredient for function including colour, texture, and fermentation.

When I say sugar, I’m referring to table sugar (sucrose). With all the hype about sugar over the past eight years (this is my third Final Proof column about sugar since October 2010), I’ve seen some interesting baking disasters because the sugar in a recipe has been meddled with. Using more or less sugar than a recipe requires will influence your results. Even substituting maple syrup or honey for table sugar creates new interactions that will not behave the same as sugar, giving very different outcomes.

Sugar not only is sweet, but it enhances other flavours and ingredients, like the earthy taste of cocoa and some of the bitter notes found in ancient grains. When I was a first-year student at the University of Guelph, I was taught the kitchen science behind the Maillard reaction. That’s when sugar reacts with amino acids in proteins, resulting in the characteristic brown colour and flavour in baked goods. It was fun experimenting and altering the recipes in that introduction to food course. As a home cook and baker, I’ve learned I can play with the sugar in my sticky chili chicken recipe but never to interfere with the sugar in baking!

Claire Tansey, professional chef and principal of Claire Tansey’s Kitchen, shares her expert opinion on the power of sugar and her culinary experience of creating a new cheesecake brownie recipe. Tansey discovered that when trying to use less sugar than she would typically add, not only was the taste not up to par, but the brownie had a very odd texture. Tansey explains, “Sugar is critical for texture of the fudge-like density plus creating the tenderizing lightness of the brownie that sets it apart from other textures. Sugar interacts with the other brownie ingredients, including water and gluten, to create air and space, giving us that familiar brownie structure. Sugar helps form the layer of crunch to the brownie top. And we can easily see this same golden brown crunchy deliciousness in the layering of texture and flavour when baking a vanilla cake.”

Meringue is another creation that is highly dependent on sugar. As a kid, homemade lemon meringue pie was a must-have for my father’s birthday every August. I remember eating all the meringue first then the lemon custard and crust. Sugar stabilizes meringue in two ways. It protects the egg whites from being overbeaten and creates that glossy foam by bonding with the egg proteins to form thin sheets around tiny air bubbles. Second, sugar provides volume and firmness and protects the meringue from collapse. Tansey reminded me, “The lovely caramel hue in the meringue is a result of the heated sugars reacting with the proteins in the egg whites.”

Along with flavour, colour, texture, stability and bulk, sugar’s multi-functionality includes acting as a growth substrate for bacteria and yeasts in fermented foods. Gases, including carbon dioxide, are produced from fermentation, making bread rise and giving it a light crumb structure. In my July 2013 “Sour Science” column I interviewed master baker Chad Robertson, founder of Tartine Bakery in San Francisco. We discussed how the longer rise time translates into a darker bake because the sugars are broken down by the extended fermentation process before the loaves hit the oven. More home bakers are experimenting with making their own bread. Tansey has observed this trend as well and suggests, “With the longer rise time, there is less time required for kneading, which in turn makes it easier for the home baker. People gain the satisfaction of creating one of the oldest forms of food that has been a necessity of life.”

Sugar in bread making and baking dates back to ancient Egypt, and its chemical structure proves essential for modern day baking. I practice a healthy lifestyle; however, when I indulge I want it to be simply delicious. So I continue not to tinker with the sugar in my baking. And I follow what my grandmother used to say: “Eat all your vegetables first, and then enjoy dessert!”