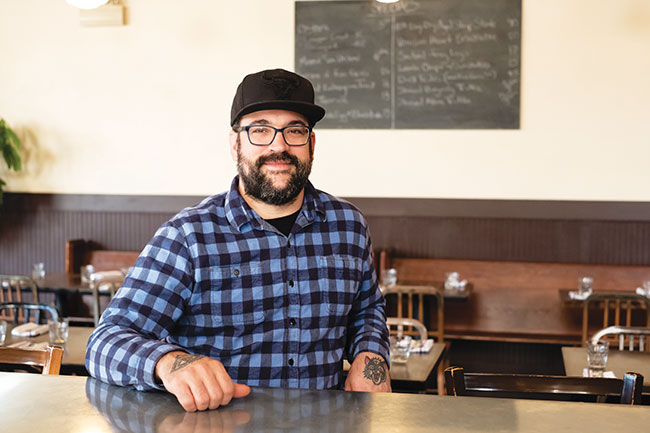 Chef Mike Simmons knows doughnuts are so much more than the workaday take-out breakfast selection that makes office breakfast meetings worthwhile. New flavours, daring ingredients take it from a humble snack with coffee to a crowd-pleasing dessert.

Bakers Journal caught up with the chef to talk about flavour trends and new ways to elevate the ever popular doughnut.

“I just love doughnuts,” says Simmons. “I’ve been eating doughnuts my whole life, and as a long time baker and a lover of breads and sweets, I found doughnuts are an easy grab for me.” Café Marie-Jeanne prefers using fresh produce in their doughnuts as ingredients and seasonal flavouring. For late autumn and winter doughnuts, the chef uses concord grape doughnuts cranberry ginger doughnuts, alongside the fall pumpkin doughnuts. “All of the fruit comes from farms that are not 100 miles from here. It’s the vibrant purples and ochres; different colours candy coloured glazes that really catch the eye.”

Chef Simmons’ creativity in working with juice and colour creates a festive glaze.

“The grapes have so much pectin in them we just cook them until they pop, and we cook the juice with bit of sugar and a bit of lemon juice and it’s almost like a jelly. Then we whip that jelly with some sugar and it makes a really solid doughnut glaze. We pour it over that brioche and it soaks it in a bit.

“We do a two layer thing with our layer. The first layer soaks in and then it crusts over a little, creating a waxy layer. Then the second layer sticks to that original coat, to give you that raised, bright purple glaze. When you bite into you it, you get that butter and the yeast kneaded into it, and it’s a really light. Then, you get into that unmistakable, purple, concord grape and it’s a little bit acidic, and it’s like, ‘this rocks!’”

Determining popularity involves more than gauging client preferences, and Simmons is objective about trends in food flavouring while still delivering a dessert menu that wows. While flavours like chocolate are not about to disappear any time soon, people seem divided about the ubiquity of Pumpkin Spice. Some have even dubbed popular reaction to the ever-present flavour as “Pumpkin Spice Fatigue.”

“I think that we’re beyond Pumpkin Spice Fatigue. I think we’ve now at a level of campiness. Restaurants and people at a certain strata of an industry might have scoffed at the idea of a pumpkin-spiced-anything in the last couple of years. Now, we’re at a place where people realize, ‘you what, it tastes good’…but it’s overplayed.

“Now, we’re going to take it, but we’re going to be careful with it. We’re going to use it in a way that’s profoundly delicious and then we can say ‘yeah, we’re on board with this pumpkin-spice thing and yes, it’s campy. We’ve taken this overplayed thing and turned into something that’s a little more put together. And it’s delicious!’”

Chef Simmons is aware that the pendulum of food trends swings widely from high-end to street food and back.

“I feel that there are waves of popularity…I feel like doughnuts have been around for a very long time. Doughnuts are having a moment. I hope so, because I would like to make more of them.”

For the colder months, Chef Simmons feels that doughnut flavours that make customers think of sunny destinations are a sure sell. Tropical flavours, like lemon, orange and pineapple in doughnuts lure clients in to Café Marie-Jeanne. “In the wintertime citrus becomes such a different thing. It’s still good, it’s in season and it’s not really that exotic, because lemons and limes are everywhere all the time, but there’s something special to it,” explains Chef Simmons. “Right now we’re really looking for ways to evoke the tropics – in the wintertime, people are really trying to escape the cold weather.

Lemon and other citrus flavours evoke warm tropics for those who can’t afford a sunny destination.Image courtesy of Café Marie-Jeanne

“One of our bakers is from Oaxaca and he makes a drink called Tepache, which is a pineapple-based drink. We’re making Tepache so that we can take it and use it to make jelly, in a pastry, in glazes or icing in a couple of months. In a couple of months, when it’s too cold and the only escape is a warm, spicy pineapple Tepache glaze. Or a daiquiri,” he laughs. “To help escape this brutal cold.”

Simmons feels that despite the new trend in haute-cuisine doughnuts, the humble street treat will still be true to its humble origins and be loved wherever and however they are served. “I think doughnuts and offices are one of those classic matches. People love mini-doughnuts because they’re adorable. There’s nothing like a little blast of sugar, when you get the doldrums to help pick you up. That little rush to get you through the clock: One doughnut, one person. ‘I’ve got my doughnut, I’m good.’ It’s easily shared, and it can be an easy conversation piece too, for people.

If your bakery can’t decide between high-end doughnuts for an elegant finish, or if you just want to put a fun spin on a classic breakfast treat, the doughnut is more versatile than ever. Take a tip from Café Marie-Jeanne: Doughnuts can be campy and classic, modern and old fashioned, but they’ll still please almost any crowd.