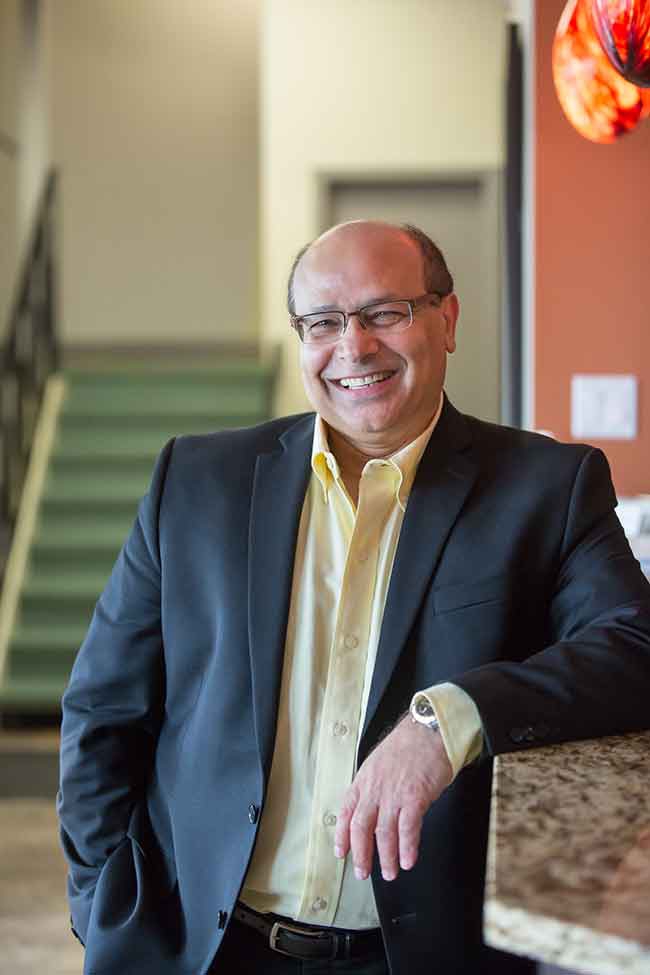 There are several reasons one should get to know Fancy Pokket owner Mike Timani, each equally important as the next.

As president and CEO of Atlantic Canada’s largest producer of pita bread, this award-winning entrepreneur has guided Fancy Pokket through six expansions. His original 1,000-square-foot operation, which opened in 1989, is now an impressive 45,000-square-foot facility in Moncton, N.B.

This summer, Timani will be opening the doors to a brand new state-of-the-art dedicated gluten-free facility located in South Carolina. At 58,000 square feet, Fancy Pokket USA is touted as one of the largest dedicated gluten-free facilities in North America. Its gluten-free products, including sliced bread, hot dog and hamburger buns, muffins,  rolls, cookies, bagels, etc., will be distributed across the U.S. and Canada. By housing its own freezer space, the building can also accommodate the company’s Moncton-made line of products, including pita bread, pizza crust, bagels, tortilla wraps and flatbread, to allow for distribution throughout the U.S., and vice versa for the Canadian facility.

“From the South Carolina location we will be able to reach more than half of the U.S. population – 170 million people – in less than a 14-hour drive. That’s one of the main reasons we chose this location. We want to be able to ship our product from Moncton to the States and we will have that kind of distribution,” Timani says.

Timani made headlines again in February when he announced that his company was giving a two-month supply of pita bread to the approximately 900 Syrian refugees who had recently arrived  in New Brunswick. As an immigrant himself, Timani knows the plight of refugees all too well and he felt compelled to assist in the best way he knew how.

In 1976, Timani fled a civil war in Lebanon, arriving in Toronto with his luggage and one phone number in his pocket — his cousin’s. After five hours with airport immigration, he emerged from Pearson International Airport.

“It’s not an easy thing to face — not knowing exactly who to talk to, where to go — I had no idea, no idea and I was on my own.”

He walked out of the airport unsure of what to do next. A taxi cab driver was nearby speaking to dispatch and to Timani’s surprise he thought he recognized him. It seemed impossible. Timani called out his name and shockingly, he answered. The two knew each other from Lebanon and their serendipitous meeting gave Timani an immediate sense of relief after an arduous journey.

Once in Canada, his plan was to study engineering, however he soon discovered that due to his immigration status his plans could not be realized.

“After several months I managed to get a work permit and started as a bus boy at the Airport Hilton in Toronto. I didn’t mean to get into that field, but I like people and I really enjoyed the hotel. Then I took some hotel management courses at Ryerson. I held 14 different positions with Hilton within nine years.”

In 1983, Timani moved to Saint John, N.B., to help open a new Hilton hotel and convention centre in the city. He continued to move up the ranks within the hotel chain and six years later made the leap to open his own business.

In June 1989, Timani opened a Lebanese-style restaurant in Moncton named Fancy Pokket, as well as a 1,000-square-foot bakery to supply pita bread to the restaurant. At the time, pita bread had little presence in the retail and foodservice markets.

“The demand for pita bread has increased tremendously. During that time it was around, but it was not well-known. What we did here in Atlantic Canada was to start to provide samples to the retail stores and since then it has been growing year after year. It’s completely different than what it used to be.”

In fact, the growing demand for Timani’s products quickly led him to a crossroads. In order to focus on his expanding bakery operation, he sold his restaurant in 1995 and concentrated his efforts on manufacturing his sought-after line of baked goods.
The story of Timani’s success is a shining example of how hard work and perseverance can pay off, regardless of where you start out. For the Syrian refugees who are receiving a taste of home from Timani, his story has the power to reassure and inspire. As chairman of the New Brunswick Multicultural Council, Timani is deeply involved with Atlantic Canada’s settlement agencies (who are responsible for placing refugees in Canadian communities).

“I have been through a civil war and I understand how tough it is. Many of these individuals may have lost their spouses, children or cousins. It’s a very, very tough situation and they’re coming here completely blind. But thanks should go out to the Canadian and provincial governments, the volunteers and the communities. They’ve been an amazing source of support and Canada should be proud of that.”

By attending “meet and greet” events and hand-delivering pita bread, Timani has had the chance to chat with some of the refugees and says they are very appreciative.

“They cannot live without pita bread. It’s their breakfast, their lunch and their dinner. Whether it’s peanut butter and jam or chicken and beef, they always have to have pita bread so I figured this is one way I can help and give them something they don’t have to miss [from home].”

Looking to the future
With the opening of Fancy Pokket’s South Carolina facility imminent, Timani’s plate is full. However, he continues to look for future growth opportunities.

“My plan right now is to concentrate on making the U.S. facility very strong as well [as] the Canadian facility, but we continue to do more R&D with different products that we would like to launch. Moving forward we’re looking at further expansion here in Moncton.”

With Fancy Pokket poised for large-scale growth within U.S. and Canadian markets, Timani is a great Canadian success story, embodying the true spirit of entrepreneurism.