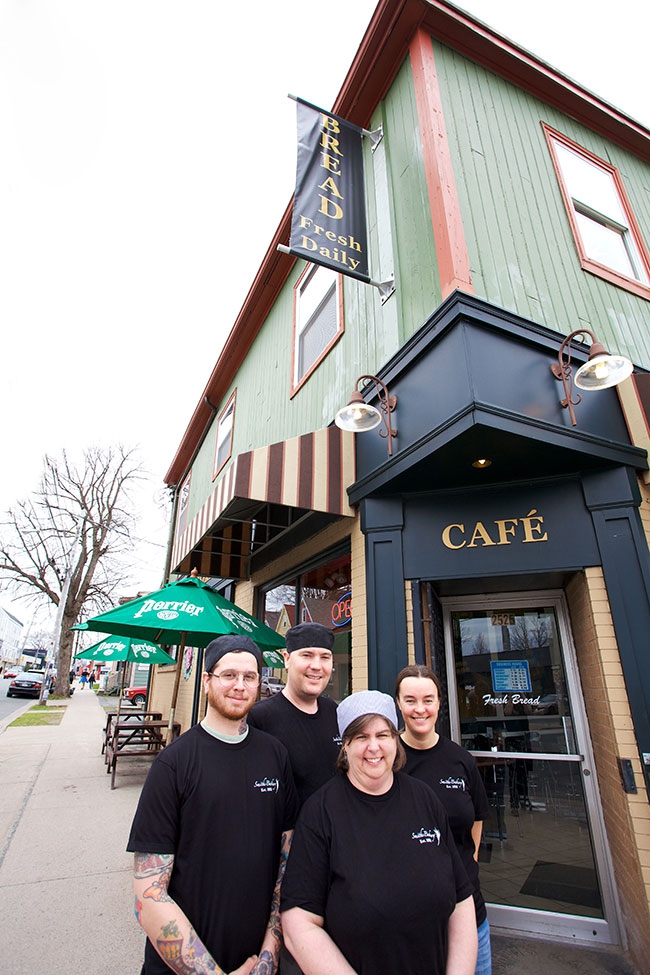 When Dennis Evans worked in his father Frank’s business, Smith’s Bakery and Café, on Agricola Street in Halifax, N.S., for 10 years, not once did he think he’d eventually run the show. But that’s what happened just over a year ago when Dennis and his wife, Tara Fleming, negotiated with Frank and his wife, Carolyn, to take over the bakery. Frank and Carolyn were ready to retire but wanted to keep the bakery in the family.

“My dad proposed it as a possible option,” Dennis says. “He didn’t think it was a possible option for the two of us. He imagined me finding another business partner, possibly someone else in the industry. But once we looked at it with the skills Tara has … it made sense that we could fit it in.”

The first Smith family started the bakery in a garage in the 1920s and incorporated the business in 1932, making it the oldest independent bakery in the city. The Smith family ran the bakery until the 1980s. The original bakery was on nearby Gottingen Street and moved to Agricola in 1961. According to Dennis, the bakery was always known for its pies, squares and cakes. Frank and Carolyn purchased the bakery in 2004.

“We felt the area it was located in had considerable promise,” Frank says. “It’s unlikely that the bakery would have continued had we not kept it going.” The Evans’ later learned that Carolyn’s parents were bakers at the original Smith’s bakery.

Dennis and Tara wanted sole control of decisions made concerning the bakery, but they were worried Frank and Carolyn wouldn’t be pleased. “I think because we were clear at the beginning they respected that, but thankfully they think the changes are good,” Fleming says.

Dennis and Tara, who met while they worked in Whistler, B.C., split the duties of running the bakery. Dennis takes care of operations on the floor and in the kitchen. He hires and trains staff and is responsible for ordering and production. Tara, who also works at Nova Scotia College of Art and Design (NSCAD), takes care of schedules and payroll and works with the bookkeeper.

Most of the changes the pair made were to operations and marketing, including a new logo and smartphone-friendly website. They changed the pricing system to be more efficient at the front end. For example, all the squares are now the same price. And they updated the cash register and worked out the logistics of the small space that would be more effective for staff and customers. They hired a baker’s assistant to help with jobs such as bagging bread and making icing, so the bakers could focus on the products.

They changed the appearance of the store, creating new signage, décor in the café, and an awning at the main entrance. The staff got new T-shirts.

Dennis and Tara also wanted to improve customer service, so they created a review system to teach staff appropriate service standards. Staff are reviewed every 30 to 60 days with an eye toward goals and improvements.

They made using social media a priority in getting the word out about the bakery. They created a Facebook page on which they post photos of new products. Photos feature regular specials such as Brown Bread Day. Other postings feature the lighter side of a baker’s work, such as putting sugary eyes on cookies.

Pastry chef Marc Kimble, who’s been with Smith’s since 2011, says he appreciates that Dennis and Tara allow the staff to give them input on products and how the bakery is operated. He says Dennis has talked with him about planning and how to bake based on historical sales data. “It gives me more freedom in knowing what is going to work in certain time periods,” he says. “They have laid the groundwork to let us do what we want, and that is fun.”

Dennis and Tara took some products off the menu, but the remaining recipes have stayed the same. In most cases, the recipes for cakes, pies and squares are the same as those used by the Smith family at the first bakery.

“You can’t ignore so many years of history of why something is popular,” Dennis says. “It takes businesses years to build up a clientele. Why would you just take all that and just throw it away?”

It’s those recipes, Dennis says, that keep customers coming back. None of the Smith’s recipes have fillers or are made from mixes. There are no preservatives or complicated ingredients. The blueberry pie, he says, is made from a basic pastry recipe and blueberry filling. Dennis says that creates a food value customers appreciate. “We are using the original recipes because nutritionally, even though some of our stuff is full of sugar and quite a bit of fat, it’s actual food,” he says.

Some Things Change; Some Stay the Same
Karen Chisholm has been on staff at Smith’s since 1999. She’s now the head baker and knows well the sales potential of traditional recipes. She says former customers who live out of the city come back for the cakes they remember from the Smith’s of years ago. The pound cake, for example, is the same recipe and one of the bakery’s best sellers. “We have never changed it; we tried to change it,” Chisholm says of the recipe. “It is what it is. People know the taste; people know the look. You can’t change it.”

The changes at Smith’s reflect bigger changes in the neighbourhood in which the bakery resides. Long known as a rough part of town with high crime rates and run-down, boarded-up buildings, Agricola is undergoing a renaissance and is now one of the trendiest neighbourhoods in Halifax.

New retail shops, cafés, breweries and restaurants are bringing a new generation to the area that is discovering Smith’s for the first time.

Tara says new customers mean balancing introducing new products while keeping the older customer base happy. “We do have to be respectful of that and bring in things that are going to sell,” she says. “It’s something we are mindful of, to keep an even balance of options.”

Dennis credits his father for being a part of the positive change in the area. “This business has been a cornerstone of the area for ages,” he says. “My father tirelessly poured money into the building to bring it up to make the neighbourhood nicer and more appealing, which actually did work.”

Carolyn says she remembers seeing the potential. “It was an area I thought would ‘go’ if they could solve the problems.”

As for the next year, Dennis says they are implementing a new cost software that will help Smith’s Bakery focus on its best-selling products. They also want to work on their cakes and soon will sell products at a new farmers’ market in the city. These changes haven’t gone unnoticed by the bakery’s previous owners.

“He’s working terribly hard on it,” says Carolyn of Dennis’s investment in the bakery. “He’s there most of the time; that’s what you have to do.”

Frank adds, “It’s turning a page and we are delighted with what they have already accomplished in their first year.”