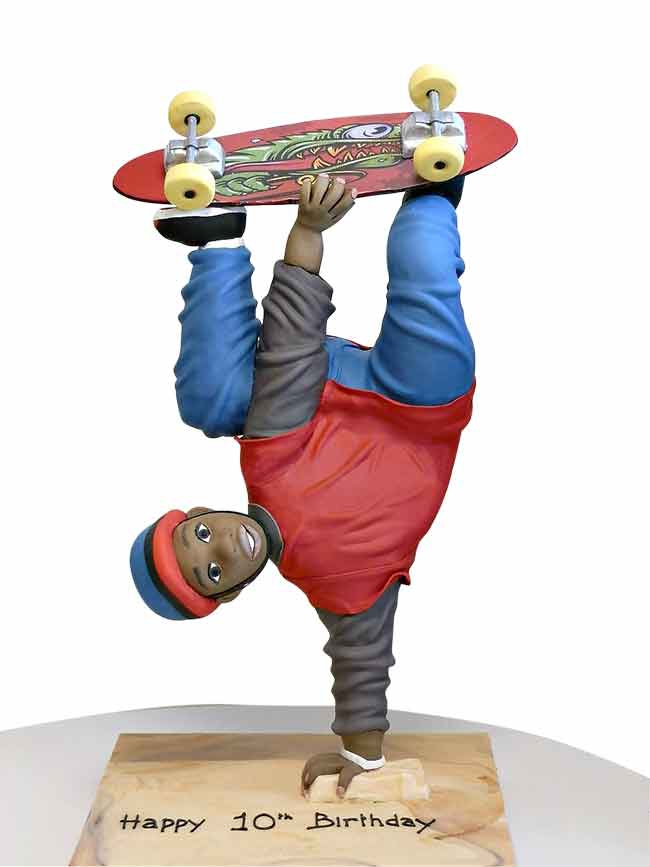 This cake of her son and his skateboard is one she holds dear to her heart. PHOTO CREDIT: Ini Erivwo/Erivana Cakes

Ini Erivwo knows how to be a cake designer on the move — literally. The Nigerian-born, self-taught cake artist started her business in Nigeria and has seen it through moving to Toronto and then to St. John’s, Nfld., where Erivana Cakes currently resides as a home-based business.

Erivwo grew up baking cakes as something that, she says, was “always part of her.” She studied industrial chemistry in university, an education that led her to a job as quality control manager at a food manufacturing company. After she got married, the couple relocated to her husband’s native city. When employment didn’t come for her as fast as she thought it would, she turned to what she had always done best.

“I started baking and decorating small birthday cakes and before I knew it, it just picked up so very quickly. I got a shop and that was how it just kept going,” she says.

The simple cakes became more elaborate and the business, which she started in 2001, grew. Just as she says she felt she’d reached the pinnacle of success for the cake company, the family needed to relocate to Canada for her husband’s work (he is a physician). This was in 2008, and they were destined for Toronto. By this time, the family had grown to include three boys who are now 14, 11 and 9 years old.

“When I got here, my husband encouraged me a lot, but I developed cold feet when people told me it would be difficult to start and make it in my cake business here.”

Discouraged, she put the cake business on hold and pursued homecare work for a year, but says she just wasn’t fulfilled by it. She returned to the world of cakes, posted her designs online, and says the response was tremendous and people began requesting her services. And so, Erivana Cakes was born in 2009. The name of her company is a clever combination of her middle name — Anna — and her last name, Erivwo. She was making eight to 10 cakes a week, with perhaps three or four being for weddings, depending on the season. Business was going well and she was about to make the move from a home-based operation to a storefront, when the family needed to relocate again, this time to St. John’s. For Erivana Cakes, she says, “everything came to a halt.” The Erivwos touched down in the wintery Maritimes on Jan. 1, 2012.

She has built up the business from home on the East Coast, catering to a new clientele once more. She has found many differences between serving people in Nigeria, Toronto and Newfoundland.

“From my experience, most clients in Canada would like to book their cakes way ahead of time. In Nigeria, it’s like ‘I want this cake tomorrow’,” she says with a laugh. “So I tended to cater for most of those clients who would order their cakes late into the day.”

She says the clientele in Newfoundland are more price-sensitive than the Toronto set, and usually ask for something that is inexpensive and are happy to have their budgets met. These are simpler cakes, whereas in Toronto she was making “really crazy cakes.” The clients were generally more demanding and less inclined to take no for an answer, she says with reflective humour.

This cake of her son and his skateboard is one she holds dear to her heart.

“Returning clients torment me so much. They ask for their cakes late and say ‘I need this cake, Ini, I need it!’”

Her creativity has also flowed in different directions as she’s moved between cultures. When she first started the company in Nigeria, she was making very simple fondant and royal icing cakes with one or two flowers.

“I was so bored doing those cakes, so I used to look forward to my kids’ birthdays. I would use that to come up with some very beautiful designs and make a cake based on their likes. Every time I sent those cakes to my kids’ school they would go, ‘wow!’”

She made hats out of cake, and those displays helped draw orders. She says most of the cakes she made in Nigeria were of her own inspiration. Clients would simply say they wanted a birthday cake for a son or daughter and Erivwo would need to come up with the design. In Canada, she says she finds the customers a little more specific about what they want.

Whatever it is they want, Erivwo says she can figure out how to pull it off without too much struggle. She painted and drew as a child, with a grandfather and uncle as artists to draw genetic inspiration from. She did a bit of technical drawing in secondary school that has helped her understand dimensions when putting together those gravity-defying cakes.

“It comes very natural to me – I don’t really struggle with painting or designing, or putting things together. I can always figure the design out … It’s a combination of engineering, architecture, art, sculpture … you find everything in cake designing.”

She has a few cake favourites in her repertoire. She once designed a purse cake that garnered a comment on her Facebook page to the effect of “why would you post a picture of a purse on a cake page,” leaving her to explain it actually was a cake.

“Which just means I really nailed it,” she says. “I really loved one I made of my son skateboarding. It was very special to me. I did that cake in the space of three days and it was a very big cake. Everyone said it looked like my son — it was extraordinary.”

Erivwo’s passion for cake shines, made even more evident by the determination to pursue her craft through several relocations. In Newfoundland, she is working from her basement where she has a separate kitchen for the business. If she were to go back to Toronto, she says she would be looking at opening up a shop. The volume of business and cash flow in Newfoundland thus far hasn’t made a storefront possible, she says, adding that you need a certain amount of people who appreciate art and are willing to pay for it to reach the top.

Erivwo markets the business through an online ad and her Facebook page, saying she thinks most of her clients are coming through word of mouth. She’s a solo flyer in a small business blessed with tremendous talent and a pleasantly spirited nature felt by the many laughs shared in conversation with her. It’s clear she loves her work, and the dynamic nature of cake artistry.

“The cake industry is a very exciting one. New things come in; you just have to update yourself on every design and every new product. Whatever you were doing five years ago is not going to be on trend, which is quite interesting to me. I love the experience.”