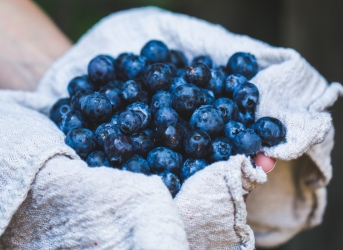 A study, led by Dr. Kalt of Kentville University in Nova Scotia, indicated that the blue pigmentation found in the skin of wild blueberry contains a high content of anthocyanin, which is a compound that kills the free radicals in the human body.

Kalt talks about how there’s more to dark berries than just antioxidants. She shares insights as to how bakers looking to create a healthy, or better-for-you treat can best incorporate this seasonal fruit into their store’s offerings.

Kalt spoke of her curiosity for the purported advantages of the blueberry, “It really is interesting in terms of the human health benefits. So, I’ve been on that [study] for a number of years…it’s probably twenty years of research underway about people who eat more fruit and vegetables have better health outcomes in a number of different areas.”

Many health professionals have been examining the health benefits of blueberries, recently. The factors Kentville University has been exploring involved, “what kind of benefits blueberries have on human health, what evidence they have of those benefits, and what are the components responsible for those same benefits,” she stated.

“Yeah, it started with the notion – and this is probably one you’ve heard of – antioxidants,” states Kalt.  “And, we knew that we need antioxidants in our body, our own bodies do a lot of chemistry to create an antioxidant type of environment. So that’s what really launched it. But twenty years of research have shown — and it is more complicated than we first believed — it isn’t a direct anti-oxidant action; anti-oxidants are only a part of why we are seeing these benefits.”

Kalt’s interest was originally drawn to blueberries’ antioxidant properties; as she delved deeper into her research, more facts came to light.  She discovered that compounds found it was the pigments of darkly coloured fruit like strawberries, cherries, blueberries and blackberries that contained anti-oxidants. “The pigments that make your muffins bleed, they are called anthocyanins,” she explained. “Antho” means “plant,” and “cyanin” means blue.

“These very interesting compounds have stories to tell… So, it started out with antioxidants, and that’s what really got consumer interest. I think the industry did a very good job of marketing this notion of antioxidants. But, I always say, as a biologist, it’s always more complicated that what it originally appeared to be.

“They have that antioxidant property. They belong to a broader category of compounds that have all kinds of health benefits, like your green tea, and your dark chocolate and your soy, that’s all in the same realm of compounds. And the anthocyanins are pigmented, so you can always see them, you can always see where they are.” She adds that the darker red wine or a fruit smoothie, the more anthocyanin it contains.

In terms of health benefits between wild and domestic blueberries, Kalt finds the difference negligible. “There’s attributes to both that are worth talking about, but I always say they’re a lot more similar than they are different. Chemically, you can distinguish them, but probably in human health outcomes you could not.”

When baking blueberries, Kalt does say that the berries lose some of their nutrients when heated, but not worry, there’s still enough to honestly call your blueberry muffins ‘healthyish.’ “If you are looking for a source of these anthocyanins, the pigments which make blueberries blue, and red wine red, you still have such a rich source in blueberries,” reassures Kalt. “You have a lot of those compounds in blueberries, so even though you’re losing some, you still have got lots and lots there.”

For bakers who want to advertise a healthier option, and want to assure customers that every measure was taken to maximize the healthy benefits of fruits like strawberries and blueberries, Kalt has some advice to keeping the most antioxidants in the better-for-you snacks.

“I think you’d start with freeze-dried fruit. Freeze drying is a very gentle way to preserve these compounds, and keep them intact… but freeze-drying commercially is quite expensive. So, you might see freeze-dried powders available, which might be added to dough or batter – if you could wrap your head around a mauve batter,” she laughs. “They could be used as food ingredients, beverage ingredients and those are freeze dried powders so they’re nice and healthy powders, and there are manufacturers out there, doing that, making freeze dried blueberry powders.”

Kalt adds that at this stage in research, scientists are still looking into how finding a measure for how much antioxidants we need to feel healthy. “I think these compounds are in a realm that we are not used to thinking about. You don’t have to have huge volumes of these anthocyanins to have some benefits.”

Kalt cites human population studies where they’re studying  hundreds of thousands of people for years, to observe how the outcome of their cardio vascular health, and counting how many have diabetes. “When you look at the people who benefited, they give them huge food frequency questionnaires, ‘how much of this stuff do you eat?’”

She noted that comparing the outcomes of people who never eat any anthocyanins and comparing them to people who ate “the maximum amount” of anthocyanins, it didn’t take much to see an improvement. “The maximum people aren’t eating much anthocyanins, they’re eating two, three tablespoons a day. Something like that. And they’re able to document that these people have improved health outcomes. So, to me, it’s not to say that small amount would be the best, but it’s saying even that small amount is efficacious. So, to me, that’s interesting.”