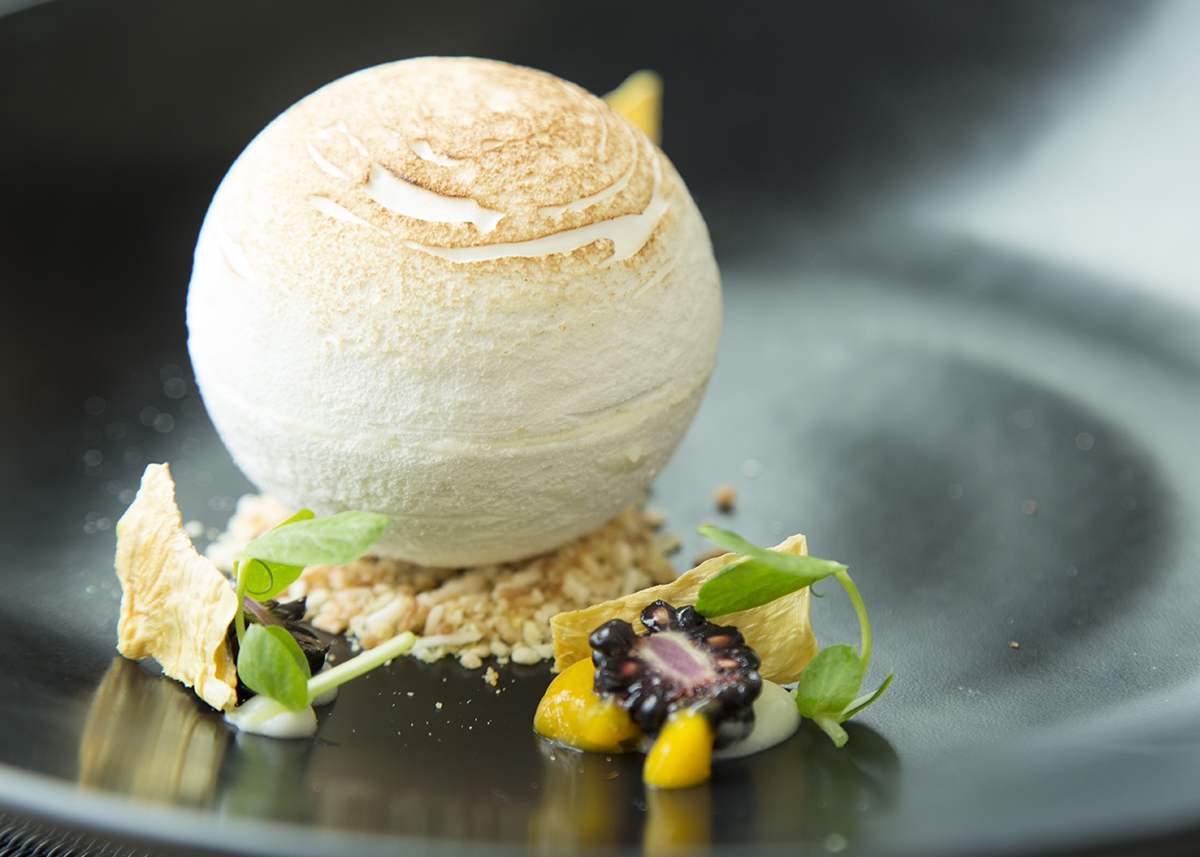 Bistro ’67, the full-service teaching restaurant within the W. Galen Weston Centre for Food at Durham College, is taking its Cinco de Mayo celebrations to another level this year with a beautiful piñata-inspired dessert.

“Chef Sojo had the vision of creating an edible piñata,” says Rinsma. “We discussed a few different options and in the end, I was able to bring it to life.” Rinsma and Chef Sojo went through a variety of different flavour combinations before deciding on passionfruit and mango as the best choice.

Deciding on flavours soon proved to be the easier task at hand for Rinsma as she began working on the meringue. The main challenge was to find the right balance between dehydrating the merginue long enough that it would come out of the dome molds, but not so much that it would start to crystalize. The next challenge was ensuring the meringue shells did not break while removing them from the molds.

Once filled and assembled using white chocolate, Rinsma had to ensure the sphere wouldn’t get soggy, which would prevent it from cracking open when hit. “That was the biggest thing that could have gone wrong,” she says. “I had to make sure the meringue hit a literal sweet spot of conditions.”

A second-year student in the Culinary Management program at Durham College, Rinsma also works as a line cook at Bistro ’67, where her dessert is being featured on the new spring menu alongside dishes by Chef Sojo.

“It’s surreal,” says Rinsma. “Having Chef Raul and the entire Centre for Food team champion my creation to the point that it’s on the menu at Bistro ’67 is a perfect example of the kind of support and encouragement the college gives its students. I told Chef he didn’t have to name it after me, but he said he wanted to so that I was recognized for my hard work and all the things that I put into making this dessert happen. I’m very grateful.”

Rinsma’s piñata dessert success is one of many accomplishments she has been racking up while completing her studies. Recently, she and fellow students Kristin Atwood and Jonathan Soligo won the Taste Canada Cook the Books competition together. She also received Durham College’s 2017 Gold Medal Award, which honors the college’s top culinary student. As part of her prize, Rinsma will travel to Italy from June 17 to July 1 to study culinary techniques and learn from the Italian Culinary Exploration program at the Italian Culinary Institute. Rinsma will also be attending the Institute of Technology Tralee in Ireland this fall to pursue post-graduate culinary studies and continue to sharpen her skills.