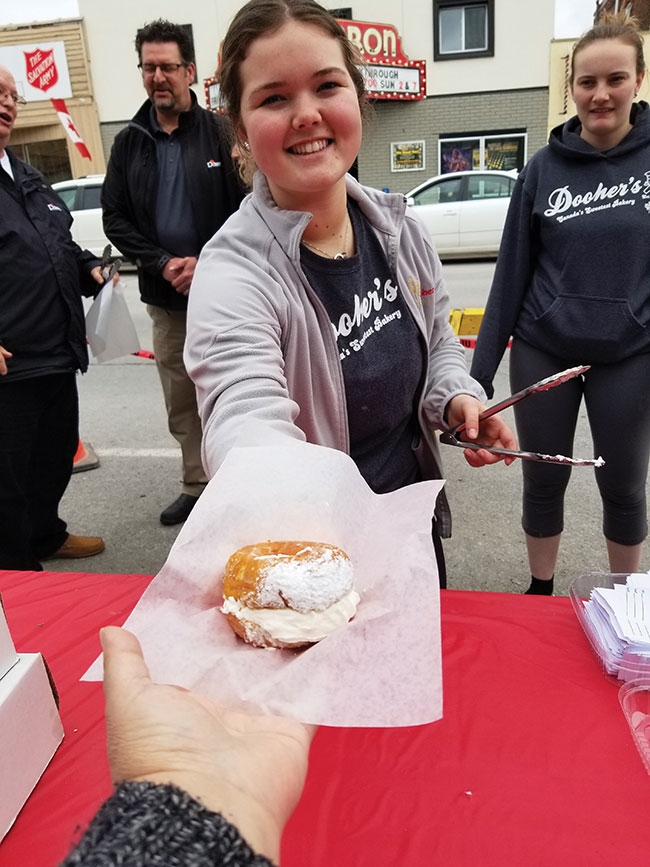 Dooher’s cream-filled doughnuts are the bakery’s claim to fame.

The winner of the 2019 Jake The Baker contest was Dooher’s bakery, of Campbellford, Ontario. Bakers Journal spoke with Alannah Haig, marketing and advertising coordinator for the bakery, who started working eleven years ago at Dooher’s, when she was just fourteen.

This speaks of the devotion that previous employers, and clients have for the popular bakery. Haig even refers to herself laughingly as ‘the adopted Dooher.’ “For me, Dooher’s has turned into a hobby, something I enjoy doing, rather than a job. I’ve always felt that I was part of the family.”

Neither of the owners, Cory nor Pete were able to come to Montreal to personally receive their Jake the Baker Award, because they were doing what they do best: Celebrating with gratitude. They were busy throwing a town-wide party complete with free barbecue, free concert and a charity raffle to raise funds for their hospital. The reason for their absence from the Bakery Showcase was a sweet one. Literally.

Weeks before Dooher’s Bakery won the Jake The Baker Award, the bakery also won the “Sweetest Bakery in Canada” contest, an award that recognizes bakeries who impact their community in special ways; It’s a customer-based vote. In typical Dooher fashion, they didn’t keep the award money for themselves: The family-run bakery decided to host a giant party as a gesture of thanks to their town that nominated them for the national award. Unfortunately, the date of the celebratory celebration conflicted with the Bakery Showcase, and the Dooher’s remained in Campbellford.

This much-awarded bakery has a heart as big as the Giant Toonie that makes Campbellford famous. Since the bakery’s launch in 1949, the Dooher clan was very committed to its community.

Haig explained, “not only is the Dooher family already a huge part of the community, in supporting the hospital and bigger organizations, but because we are a small town, and a small-scale, family-owned bakery, we’ve always been really involved.”

“Dawn Foods gave us $5000 to do whatever we wanted with the money,” Haid stated. “We decided that we wanted to put it towards a full, all-out, community-wide celebration. There’s a free barbecue, free doughnuts, free live music at the arena, free dancing, free raffle…everything. The profit we make from the raffles are all donated from the local businesses. We approached the businesses throughout Trenton-Hills, advising them that this party is happening.” Haig approached the local businesses to ask if they would donate items for the raffle table. The response was immediate and generous. “We’ll be attracting an audience from far and wide. They knew that money is going to back to the community.”

Dooher’s bakery donates generously to their local food bank, as well as to two schools breakfast programs. The family bakery also makes sure that the food bank is well stocked prior to large holidays. “We would contact them on Christmas eve, the Saturday of Thanksgiving or the Sunday of Easter and say ‘we’re going to be closed for x amount of days, we’d like to fill all the freezers over there.’ Now, it has happily turned into a weekly pickup, so we don’t even have to call them, we don’t have to tell them when we have too much. They are just always there every Wednesday and they know that they get whatever day-olds we have up until Wednesday, and that includes Monday or Tuesday, if there’s any. They know that they get to fill their freezer and they can take as much as they have room for.”

Dooher’s cream-filled doughnuts are the bakery’s claim to fame.

Dooher’s bakery provides baked goods from sliced bread to bagels for Hillcrest High school’s breakfast program. “From what I’ve heard, the bagels are the most popular, and the first to go,” adds Alannah. “I can remember when I was in one of the local public schools, it started up when I was there. It seems like after that, the high school and the public school were on board as well. It’s not something Dooher’s initiated, but it’s something that we definitely support.”

Having students who work at the bakery means that Dooher’s gets an “inside scoop” on the needs of the teens and the community. “The  Doohers have been involved for a long time with all three of their kids, so they know what it’s like. We know first hand what’s going on. We know if there’s a fundraiser that the high school is doing. They know to bring a letter to Dooher’s. ‘Oh, I work there, and I know they’ll happily give us a donation,’ Haig smiles. “We’re very fortunate to have such good students every year and be able to have that partnership. I couldn’t imagine not having to package bagels and sliced bread for the schools. It’s just part of the job, and a weekly task and we don’t know any different. It’s just what we do.

All the money from their May 4th celebration went to the Campbellford Hospital. “They have to replace all of their IV pumps…they are thousands of dollars. So we’re hoping to purchase at least one or two of those on their behalf. It’s something that I’m sure they heard through the grapevine, but as for the hospital itself, it will be a surprise to their foundation.”

Harry and Christine, Pete Dooher’s parents and the founders of Dooher’s, set an example for their children when it came to community involvement. “Pete took it upon himself to partner with the hospital and put on these high-end, five star gala dinners,” explained Haig. “The tickets were a couple hundred dollars each, and all of the money went to the hospital. The first gala dinner took place in our local curling club, and continued for four years. I know we always hit capacity for the attendance.” The popularity of the event brought together the town adults as well as the teens. “All of us students at the bakery, we would be the servers. It was great for us because it was a volunteer opportunity, but also a way for people to get to know of us outside of the bakery. It was great to establish a connection with the people in the community.”

“We raised hundreds of thousands of dollars, and all of that went to the hospital,” added Haig. “It was all started by Peter Dooher.” He approached the hospital board and foundation with his fundraising idea, and the gala dinners remained popular for four years.

“As for why they didn’t go on longer than four years, it’s one of those things, even though everyone is a huge supporter, after a few years, they’d want to switch the event up.”

Campbellford is known for its philanthropic bakery that won two different awards in one week, but it’s famous its pastry, too. Dooher’s speciality? Haig answers without hesitation. “The cream-filled doughnut.  It’s pretty basic, but it’s mind boggling how insanely popular it is. Seasonal visitors…they come from everywhere for those doughnuts.”

“When we post a picture of then on one of our social media sites, everyone from literally, around the country will comment and say, ‘oh, I miss those!’ ‘I remember those, I live in Vancouver now, and I remember when I travelled through Ontario, that was a must-have…’ Cambellford is home of the giant two dollar coin, but I think people here say it’s the home of the cream-filled doughnut.”