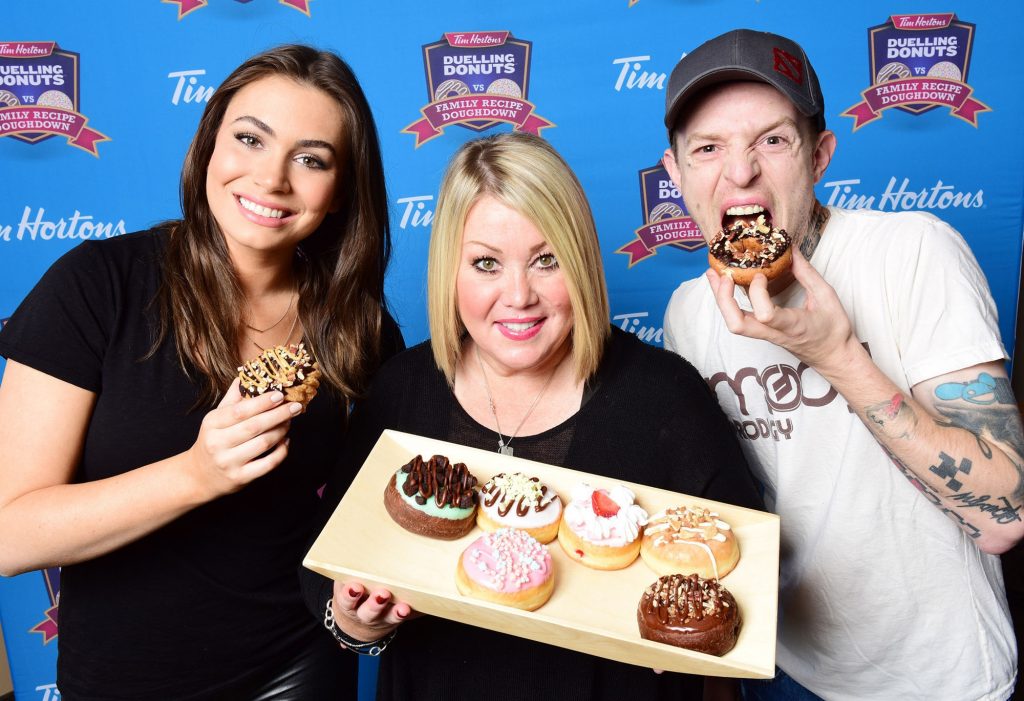 From left to right: Sophie Tweed-Simmons, Jann Arden and deadmau5 had the difficult task of narrowing eight finalists down to four, as part of Tim Hortons Duelling Donuts contest.

Aug. 24, 2015, Oakville, ON – From maple crème filling to strawberry icing to brownie crumble topping, the judges of the Tim Hortons Duelling Donuts contest had a sweet day.

But it wasn’t a cakewalk for the judges. Jann Arden, deadmau5 and Sophie Tweed-Simmons had the difficult task of narrowing down the field of eight candidates to just four semi-finalists who would proceed to the online voting round of the competition. The judges managed to pick their top four selections, and now the donut polls are officially open at DuellingDonuts.ca for Canadians to have their say.

“We tried eight incredible pieces of heaven, and heard the fun stories behind each one,” Arden said. “Narrowing the field to four was almost impossible. Each donut was so good in its own way and all eight contestants showed a true passion for their family-inspired recipes.”

Canadians can visit DuellingDonuts.ca to vote daily for their favourite donut until Aug. 31. The two donuts with the most votes will advance to the finalist round.

The two finalists will be announced on Sept. 1. Then, for a limited time in spring 2016, the two donuts will be sold in Tim Hortons restaurants across Canada, where Canadians can vote with their taste buds.  The most popular donut will be crowned champion and its creator will receive $10,000.

“We’re excited to see which two donuts will be brought to life in our restaurants next spring,” said David Clanachan, president and COO of Tim Hortons Canada. “The great news is that all four finalist donuts are delicious, so whatever the outcome, our guests won’t be disappointed.”