Bakery health trends by the numbers 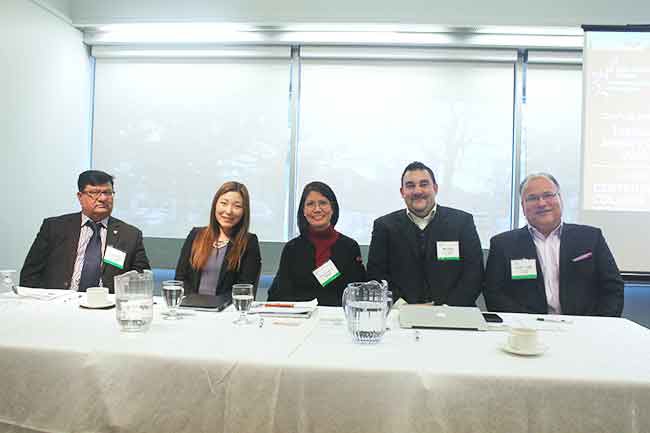 When it comes to bakery trends, numbers can speak volumes. The Baking Association of Canada’s (BAC) Ontario chapter recently presented a data focused seminar on some of the big health trends of today. The event took place on Jan. 26 at Centennial College in Scarborough, Ont.

The packed room heard from five panelists: Paul Hetherington, president and CEO of the BAC; Athar Haidar Shah of the business and development unit for the Ontario Ministry of Agriculture, Food and Rural Affairs (OMAFRA); Marc Boria, vice-president of business development for Lucros Partners/Shopper Intelligence; Lisa Zhao, client service analyst for Direct Link; and Lariza Lopez de Leon, R&D specialist for the bakery side of Caldic Canada. Robert Kowal from Kriscor & Associates served as moderator for the group.

First up: The GMO debate
Hetherington focused on the ongoing genetically modified (GM) food issue, made particularly timely by Campbell’s recent decision to initiate voluntary GM labeling on all of its products. What follows is a snapshot of his presentation.

As of 2010, 365 million acres in 29 different countries were used to cultivate genetically modified crops. In recent years, the non-browning Arctic apple and GM salmon have been approved (a seven to 10 year process), but have they been met with consumer acceptance? The debate rages on.

Hetherington says the controversy is being fueled in part by social license, meaning the public grants trust to a company, but that trust is precarious. It’s slow to build and easy to lose, he says, all being “aided and abetted by the rise of social media.” The main takeaway: be transparent.

“Don’t try to appear to be perfect,” he said. “Just reveal your humanities.”

Consumers want to know everything about how their food is made, who makes it, whether it’s sustainable and what types of chemicals are on the crops. This goes alongside the desire for clean label.

In an Ipsos Reid poll commissioned in 2015 by the Canadian Biotechnology Action Network, respondents indicated a high level of awareness about GM foods.

From the same survey, of those who wanted to see GM foods labeled, the vast majority (87 per cent) cited wanting to know what is in the food they are eating. Other reasons included: there hasn’t been enough research on the health and environmental impacts (58 per cent), safety of the food (55 per cent), government lack of transparency (47 per cent), concerns about corporate control (46 per cent), don’t think GM food is natural (46 per cent) and are concerned about the environment (45 per cent). Thirty per cent are worried about the ethics of it all.

When it comes to buying behavior and consumer acceptance, the same crowd was split. When asked if they would eat the GM salmon, 45 per cent said no, but the rest either would or weren’t sure or didn’t have an opinion.

“This seems to be a fairly set attitude,” Hetherington commented. “Even if the product has an environmental or nutritional benefit.”

As of Nov. 1, 2015, foods that were non-GMO verified were outpacing organic food in sales, show statistics published in The Wall Street Journal (data excludes sales from Whole Foods). The numbers came from the Non-GMO Project (for the non-GMO figures) and Nutrition Business Journal (organic figures). Non-GMO foods were predicted to climb as high as $13 billion in sales in 2015. Non-GMO sales are burgeoning at a rate of about 70 per cent a year, every year, since 2013. This is around five times the rate of organic foods growth.

Organic food is non-GMO by nature, but non-GMO is not necessarily organic. There is some political sensitivity around this, Hetherington explained, as some organic producers feel non-GMO is treading on their “turf.”

When it comes to the label, Canada and the U.S. have voluntary standards. In Canada the label can only speak to the specific ingredients and not the food itself, Hetherington said.

“It’s so cumbersome that it is not used in Canada, basically.”

The U.S. seems headed towards state regulations. Vermont will adopt its mandatory law this summer. On July 23, 2015, the federal Pompeo bill was passed by the House of Representatives, but it has yet to pass the Senate. It’s crux reads as follows: “HR 1599 protects the consumer from a costly and confusing 50 state patchwork of labelling laws by ensuring that the federal government retains its authority at the top of America’s food safety pyramid. It would also create a single, unified standard for food to be labelled as ‘GMO free’ as part of a USDA [United States Department of Agriculture] program modeled after the popular USDA Organics program.”

Activity in the European Union (EU) has centered around legislation amendments that would give its members more room to restrict EU-allowed GM goods in their territory.  Two-thirds of the member states indicated they want to opt out of existing GM-approvals to ban cultivation in their respective countries.

Campbell’s decision to voluntarily label its products will become the norm, rather than the unique, Hetherington said. Campbell’s is proposing this language for its labels: “Partially produced with genetic engineering. For information about GMO ingredients visit whatsinmyfood.com.”

Hetherington posed an interesting dichotomy he sees between the acceptance of the rapid evolution of technology in areas like transportation, communications and apparel, and the popularity of a belief in eating more like our ancestors. Technology as it applies to food does not seem to be held in the same high regard.

Bakery market and product trends
Shah is a bakery sector specialist with OMAFRA. He shared plenty of interesting data on the bakery market’s value and what’s selling.

In 2014, the value of baked goods shipments increased by seven per cent to $8.7 billion in Canada. Most of this is local, he said, with exports accounting for $2.3 billion, of which $2.2 billion heads for the U.S. This data comes from the 2015 Canadian Food Industry Report.

By sales value, bread is the largest product category, followed by pastries and then cakes (Euromonitor International’s Baked Goods in Canada, Oct. 2014).

When it came to packaged bread data, Shah assembled 2012-2014 data from a range of sources, including store checks, trade press and associations, interviews and official statistics. His research indicates that specialty breads are up two per cent and white bread is down one per cent. Whole wheat, buns and rolls are down one per cent. Bagels, English muffins, multigrain sandwich, pita, tortilla and others were all flat.

In packaged cakes, single cakes are outselling multi-packs by a spread of about 90 per cent.

Shah shared statistics on the biscuits market from the October 2014 Euromonitor International report Biscuits in Canada. Biscuits grew in retail current value terms by three per cent, and increased its plot of retail volume sales by one per cent. Healthier options are growing in demand.

On the foodservice side
Zhao is a client service analyst for Direct Link, a company that collects foodservice data. Bakery is the third largest of all the categories they collect information on, and it includes raw and finished products, desserts and snacks.

In terms of annual growth, bakery was flat for 2013-2014, but foodservice overall is growing. Gluten-free is still growing in all categories, although she noted it is not as penetrated in foodservice as it is in retail. And, while still growing, she further noted gluten-free makes up less than three per cent of all the bakery products her company tracks.

Breads, cookies, flours and grains are top trackers, with breads and rolls, croissants, muffins, coating mix and flatbreads growing the speediest, while cookies, crackers, doughnuts, sugar and baking chips are seeing the most decline in foodservice.

Artisan sandwich buns and rolls in particular are seeing growth, and the company is seeing more new manufacturers of these products. Direct Link defines artisan for its purposes as that which is reported as such by the distributor or manufacturer.

Clean label freshness
Lopez de Leon, an R&D bakery specialist at Caldic, turned the audience’s attention to ways in which one can preserve the freshness of the bread and the clean label. By freshness, she clarified she meant solutions for moistness, not necessarily mold inhibition. Here is an overview of her presentation.

Bread begins the staling process as soon as it comes out of the oven, she explained. Water begins to leach out and evaporate, which is one of the key reasons for stale bread. Ingredients that typically delay staling are emulsifiers, enzymes and gums.

Enzymes, which are widely used, are biological compounds (proteins), which accelerate the conversion of one material into another, she said. Typically, this reaction is called lock and key because only one special material will fit with the enzyme, and change the intended target but leave the enzyme intact.

Amylases are enzymes which turn part of the starch to dextrins and maltose, which slows how fast the starch molecules try to re-crystallize themselves back into their old state (and stale the bread in the process). It works on the damaged portion of the starch by breaking into smaller bits, and thus allowing for less water retention and better gluten development.

Xylanase/hemicellulase/pentosanases enzymes work by breaking non-starch polysaccharide chains into littler pieces, giving the bread more oven spring and higher volume. They can also take in up to 30 per cent of the water absorption ability of the dough.

Lipases work on lipids, and will improve the emulsifying ability of eggs.

At Caldic, the team found that the life of bread in their tests could be lengthened by seven days through the use of an enzyme system.

Hydrocolloids, or gums, are another way bakers can improve the fresh shelf life of their bread. Gums thicken or gel when mixed with water, which means they aid in moisture management. This translates into less moisture loss and ice crystals.

Guar gum is an all-natural one that is cold water soluble, stable for baking and freezing and economical.

Psyllium husk powder is another natural product that Lopez de Leon sees as becoming more popular in gluten-free baking. Psyllium husk is a good source of soluble dietary fibre, and has a lot of ability to bind with water.

In closing: how people shop
Boria is the vice-president of business development for Lucros Partners/Shopper Intelligence. Shopper Intelligence is a survey system used to measure perceptions and buying behaviour. Lucros does the assessment and produces insights from the data. In essence, it is a “whole store” shopper research program for grocery retailers. The program covers 103 categories in all the key departments, surveying a minimum of 300 people per category, per retailer, within the last three days of purchase. There are three categories within the bakery department: hot dog/burger buns, in-store bakery and prepackaged bread. Items like cookies and crackers fall under the grocery department.

Boria’s data is based on over 68,000 Ontario shopper interviews. An early point of interest came in how Ontario shoppers’ views differed from other global views. In terms of importance, Canadians look for fresh, quality and price in that order. In the U.S., this is flipped. Price is first and fresh is third. Fresh and quality were also the top two answers in Australia, the U.K. and France.

The in-store bakery was also deemed a “hero” section specifically in Loblaws and Sobeys, which means people are highly engaged and highly intentional when they go there. Boria recommended ensuring this department is innovative, taking advantage of opportunities for private label, making it a user-friendly department to shop, promoting it to customers and using its high sensory appeal to create a destination within the store.

The BAC’s Ontario Chapter presented five diverse speakers, who in turn shared unique meaningful data. What does it all mean when you put it together? There are many opportunities for innovation! And, it looks like overall things are going pretty well.