The future of our industry relies on more than a “pulse,” Rob McMahon found out … 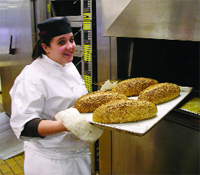 Like most baking students, Janis Simmons has a passion for the trade.

“I always loved to make yummy things,” said Simmons, who attends the Baking and Pastry Arts program at the Southern Alberta Institute of Technology (SAIT). “I enjoy it so much, I thought why not make a career of it.”

To this end, after completing a professional cooking program at SAIT, Simmons focused on baking, enrolling in the school’s program in 2005. She will graduate in six months, and while she’s still unsure of where she will work, feels the program’s reputation and the skills she learned will give her a boost during her job hunt.

Unfortunately, due to recent industry trends, when Simmons leaves school, she may face difficulty finding employment that matches her training and background. With a nationwide labour deficit, and companies focusing on more specialized, less skilled positions, Simmons may not find a job that will compensate her for the time and money she invested in her career.

Paul Hetherington, president of the Baking Association of Canada (BAC), said the labour demand for bakers is massive; and as a result, the baking industry – along with other trades, such as electricians and carpenters – is having real difficulty attracting skilled and unskilled workers. Hetherington said the issue is more challenging today that it was 10 years ago, with many baking companies bringing in offshore workers to address shortages.

“I asked one of our members who was looking to hire people what qualifications they need, and they said ‘a heartbeat,’ ” said Hetherington. “The problem got worse and is getting worse. Look at the demographics – where are the new workers going to come from?”

The industry is also having trouble attracting passionate, skilled bakers like Simmons. Ian Gallacher, program coordinator of George Brown College’s faculty of hospitality and tourism, said that trained bakers are on their feet for 18-hour days and make only $12 an hour – as a result, they often become discouraged. This perception of the industry – that people work long, strenuous hours for relatively low pay – is contributing to the shortage. In British Columbia, for example, bakers earn an annual average of $21,424 – compared to $32,080 provincially. Many positions don’t offer graduated pay scales, and though wages increase as time passes, things are tough at first – especially for students who racked up student loans during training.

“One of our biggest challenges is when students ask for justification for their training,” said Gallacher. “After two years of training, they’re going out and earning $12 an hour.”

Simmons acknowledged the costs of the program at SAIT, but felt in the long run, the investment is worth it – and she was thrilled with the program’s quality.

“Financially, school is hard, but sometimes it costs money in order to be able to make money,” she said. “I need to invest in my education and my career to get ahead…. It all adds up, but what can you do? I found something I love, and need to do this to do it.”

In Canada, baking is an apprenticed trade in five provinces, and as a result, bakers can work towards becoming journeymen through the apprenticeship process, eventually writing an exam to gain the journeyman designation. However, anyone is free to challenge that exam, and, at present, nothing blocks anyone from calling themselves an apprentice baker.

“There’s nothing preventing anyone from opening a store up and calling themselves a baker,” said Hetherington. “As well, not everyone needs a journeyman baker.”

Parry Robinson, the head of Vancouver Community College’s baking department, said the nature of work in the industry also doesn’t attract skilled workers. He said the industry shift to large, wholesale suppliers of bake-off products has accelerated this trend. Increasingly, large-scale, industrial bakeries are separating tasks, so that, rather than being involved in many aspects of a job, industrial bakers repeat the same simple tasks over and over again. Now, retailers purchase ready-made pie shells from one supplier, and fillings from another, or sometimes even a whole pie, and simply bake it in-store.

“Because the job market is so good, people can get jobs without any training…. You don’t need a lot of qualified workers to get the product ready,” said Robinson. “People are working in bakeries, but are they bakers? What if all someone does is scoop apple pie filling from a bucket?”

Robinson said many people say they have a passion for baking, but when they leave school and start work, that passion is dissipated by the demands of the job and low wages. For example, he said a large wedding cake manufacturing company once
contacted the school to post an ad. He said the employer was looking for someone with baking, design and decorating experience, able to lead a team of decorators and had customer service skills – and the position started at $8.25 an hour.

“At that rate, you can get a much easier job that has a lot less responsibility for the same rate,” he said. “Employers are taking advantage of people.”

Despite the lack of wages that fairly compensate bakers as skilled workers, Gallacher said enrollment at George Brown has substantially increased – classes are full, and the college is expanding. On the West Coast, the same thing is happening at Vancouver Community College. Robinson said classes are full and have a six-month waiting list – though he noted that college-wide enrolment is down.

Human Resources and Development Canada states bakers “usually” require completion of high school and a three- or four-year apprenticeship program, or a college baking or other program. However, it notes that on-the-job training may be provided, and that trade certification is available, but voluntary.

Gallacher said that the industry generally won’t support mandatory certification, as it would substantially increase wages. If bakers required certification to practice their trade, like electricians or plumbers do, they would demand more money to offset the training, something that the industry is unlikely to support, he said.

“Now all you need is a apron to call yourself a baker or pastry chef,” he said. “In a way, that’s frightening, considering all the recent outbreaks of e-coli.”

Siegried Heilemann, a master chef and the operations manager at Toronto’s Backerhaus Veit, said the trend towards less skilled bakers is troubling – and is frustrating for smaller, artisan-style bakeries that create products from scratch. He said the company, which employs between 100 and 120 people, has trouble finding well-trained bakers.

“There’s always a demand for good people,” he said. “We’re not looking for engineers or food technicians who don’t know how to bake.”

Another problem is retention of skilled workers in the industry. After five years, many former students become discouraged with the long hours, hard work, repetitive tasks and low wages, and switch to another industry. Gallacher said he’s seen students he taught three or four years ago who say they’re going into nursing.

Generally speaking, said Heilemann, bakers don’t garner the same perceived respect as plumbers or electricians. As a result, many people get an education in the trade, and go on to do something else – either allied with the trade or completely different.
“I was trained in Germany, and it was the same – people believe being an electrician or plumber is a very good job, but being a baker is kind of a lower-level job,” he said. “People don’t see the value in bread…. They will get their car fixed for $100 an hour, but if I want to charge $100 an hour for Christmas cake, they don’t want to buy it.”

To help solve these problems, the BAC is working with government to try and attract new workers to the food and baking industry. Hetherington said the strategy will help bring more young workers into the trade. As well, government subsidizes training costs. For example, at George Brown, the government pays roughly half the costs of the program. The Ontario government recently more than doubled its budget for training and employment, increasing Employment Ontario’s investment to $885 million – funds that will be used to give job seekers easier access to programs that will help them achieve career and business goals.

For working bakers, the BAC offers correspondence courses – a theory component to complement their practical work. Courses build towards designation as a “Certified Bakery Specialist,” and include topics from sanitation and hygiene to nutrition, packaging, and mold and rope infections. The course grew out of a training needs assessment the association conducted in 1997.
“Those surveyed said they were looking for opportunities to get extra theory training for their employees that matched their on-site practical training,” said Hetherington. “The correspondence course is designed to serve the needs of both skilled and unskilled workers in the industry.”

However, these courses are out of date – and the association’s attempts to secure government funding (a six-figure amount) to update materials haven’t yet been successful. Hetherington said the association hasn’t yet taken a look at what it can do without funding, and noted that it will take a significant investment to update the correspondence courses.

“Baking is not that big an industry – that’s the underlying message we received, when we asked them to give us funding dollars,” said Hetherington. “The statement that we’re not a big industry, is what we take exception to.”

According to Agriculture and Agri-Food Canada, in 1997 the bread and bakery sub-sector had shipments of $2.3 billion, and some 3,000 retail bakeries had estimated annual sales of more than $600 million.

One solution to the low wage problem for skilled bakers is to work for high-quality artisan bakeries. Gallacher gave the example of Toronto’s Ace Bakery, which offers handcrafted loaves of bread that cost upwards of six dollars.

“My wife is happy paying $7 for a loaf, because of the quality in it,” he said. “I hope that with better customer education comes customer demands for better products that will drive changes in the industry.”

Robinson pointed to another emerging field: molecular gastronomy, which fuses flavours, smells and textures to create one-of-a-kind products, for a high-end market. With an emphasis on creativity and experimentation, bakers are producing interesting, sometimes bizarre, desserts for discerning customers. For example, one of Robinson’s former students created an ice cream that included flavours of fois gras and fig.

These products – though expensive and labour intensive – may be a future market for highly trained bakers, said Robinson. While Vancouver Community College doesn’t have any classes that specialize in molecular gastronomy, students are given freedom to experiment with its techniques through avenues like plated dessert classes.

“Instead of classical techniques and ideas, the creators are improvising new things,” he said. “A lot of coffee shops have the same croissants, Danishes and muffins. This fusion idea throws that model right out the door – it shows how a small segment can push things.”