Chocolate wears a lab coat to reassure eager chocoholics that they may
be supporting, rather than sabotaging, their health and well-being. 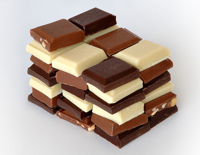 Most of us can remember when almosty anything chocolcate was marketed as "sinful" or "decadent."  Even "devil's food cake" –as opposed to the lighter-coloured "angel food cake"– drew the connection between chocolate and the "evils" of unhealthy diet and weight gain.

Today, story after story in newspapers, magazines, and medical publications report on the health benefits of dark chocolate.  Chocolate wears a lab coat to reassure eager chocoholics that they may be supporting, rather than sabotaging, their health and well-being.

Chocolate is made from the 30 to 45 beans inside a cocoa pod; these beans begin purple.  The pods grow in a very narrow range near the equator, from 20 degrees north to 20 degrees south, and each area produced very different beans with unique properties.  "Chocolate from Brazilian beans tends to have a slightly lower melting point, and so is well suited to applications like frozen desserts," explains Stephanie Marty, researcher and PhD candidate at the University of Guelph.  "On the other hand, chocolate from Malaysian beans has a higher melting point, and works well in applications which need to withstand high temperatures, such as in summer."

The familiar form of chocolate (that is, a solid bar) is fairly new.  Until the late 18th century, chocolate was consumed solely as a beverage.  "The ancient Aztecs and Mayans used to grind it up with meal, spices and water, boil it, and serve it to their highest-ranking citizens –their warriors– for whom this rare and labour-intensive drink was both a reward for bravery and a boost for battles to come," explains Dr. Leah Porter, vice-prosident, scientific affairs for the Chocolate Manufacturers' Association, based in Vienna, Va., U.S.  "They even used the beans as currency; and for centuries, chocolate was too expensive for any but the wealthiest people.  Over time, the price dropped, and with the invention of the cocoa press in 1828, chocolate began to be made in the solid form we know today."

Contrary to what we might expect, the use of chocolate as a medicine is nothing new.  "There are over 150 medicinal uses for chocolate, all recorded in historical literature," says Dr. Porter.  "They range across everything from strengthening the 'faint of heart', to reducing angina and heart palpitations, to increasing longevity.  While they still enjoy a certain status as as an alleged aphrodisiac, they have been tarred with the 'no carbs' stigma lately.  But as with any carbs, some are better than others, and all things, including chocolate, are best enjoyed in moderation as part of an overall healthy diet and exercise regimen."

While chocolate has always contained calcium, magnesium, copper, phosphorus, manganese, and zinc, which our bodies need, the big news is antioxidants.

"Antioxidants are components which reduce the oxidation of cells, which can delay and/or reverse cell damage," explains Dr. Porter.  "In chocolate's case, the predominant antioxidants are flavanols, a subset of flavonoids, which are themselves a subset of polyphenols, a group of antioxidants.  These compounds protect cells agains the damaging effects of reactive oxygen species by 'quenching' the oxygen appetite of 'free radicals', unstable oxygen molecules which damage cells, DNA, and other biological entities.  An imbalance between antioxidants and free radicals causes oxidative stress, which is linked to cance, anging, atherosclerosis, and neurodegenerative diseases, such as Parkinson's and Alzheimer's.  While the science is still evolving, and we don't know yet what levels of antioxidants are needed for efficacy, or how much is even bio-available, consumers are getting the message.  Sales of coffee, tea and dark chocolate are jumping, despite the fact that North American consumers tend to prefer milk chocolate over dark.

Chocolate has not cornered the market on antioxidants.  They are also found in red wine, green and black tea, blueberries, raspberries, and a host of fruits and vegetables.  "However," notes Dr. Porter, "the work on the antioxidant effect of chocolate is particularly exciting.  In the Wan study in the Journal of Clinical Nutrition in 2001, study participants who had a chocolate-supplemented diet had a significant decrease in low-density lipoprotein, or LDL, also known as 'bad cholesterol.'  It's still too early to know exactly what components were responsible for what changes, but this does suggest that moderate chocolate intake has a legitimate place in a healthful diet, and not just for its flavour."

However full of antioxidants chocolate may be, it is also high in calories and fat, so some manufacturers are looking at ways of boosting the health kick even a small serving of chocolate can provide.

"Food manufacturers are moving from agri-business to health and wellness," says Dr. Gale Rudolph, vice-president of functional foods with Dynamic Confections in Alpine, Utah.  Their Choco-Omeg products include a milk chocolate bar with extra calcium and rice crisps, a milk chocolate bar with real orange pieces, and a dark chocolate bar with real raspberry pieces.  Unlike other engineered-for-health products, such as calcium-fortified orange juice and Omega-3-enhanced brad and yogurt, chocolate has the built-in advantage of a comparatively long shelf life of 12 to 18 months, which leads to opportunities, as well as to a whole range of challenges.

"We saw the opportunity of adding well-researched and widely accepted functional additives to chocolate without sacrificing flavour," sayd Dr. Rudolph.  "Omega-3 was the best place to start, but was not without its challenges.  We had to maintain the taste and texture of chocolate without introducing any fishy notes or 'burpback factor.'  We needed to maintain chocolate's usual shelf life, so ground flax see –which can go rancid quickly– gave way to whole flax seeds.  There's also the challenge of delivering efficacious amounts, not just the 'fairy dust' amounts.  And there were operational issues around handling, processing, packaging, and tightly controlling quality control, to ensure that these delicate components remained intact, to provide benefit to the consumer."

Each of the three Choco-Omeg bars as 100 to 200 mg of Omega-3 from a vegetarian algae source, and is focused on a particular area of health.  "The dark chocolate with raspberries focuses on heart health, with double the Omega-3 of the other two bars.  In addition to Omega-3, the flaxseeds also provide lignans and fibre.  This low-glycemic, low-trans-fat bar also contains vitamins and minerals specifically chosen to boost heart health," says Dr. Rudolph.  "The calcium version has 50 per cent of the daily value of calcium, which is more than an eight-ounce glass of milk, plus vitamin D, magnesium, and phosphorus.  The orange version, focuses on memory, adding choline to the Omega-3 for cognitive function.  None of these is a medicine, and we declare on the label that the product is not intentded to treat any disease."

The bars are sold in Canadian pharmacies, though the original formulation (using fish oil) is now available in the nutrition bar and pharmacy section of some grocery stores.  Possible future bars include ones focused on energy (probiotics), joint health (glucosamine), and vision (bilberries and lutein).

A Square a Day?

While research continues on whether dark chocolate is truly the functional food that all chocoholics hope it is, there is enough credible science to support moderate intake linking to potential health benefits.  Of course, it also helps that chocolate tastes good –with, or without, functional additives.  But will consumers be inclined to overindulge in what previously was a "sinful" and "decadent" choice, assuming health benefits have offset calories and fat?  Or will chocolate become the next trendy "medicine," eaten, or taken, with duty?  "The way we see it," says Dr. Rudolph, "you can indulge without feeling so guilty."