Features Profiles
Dan Does It 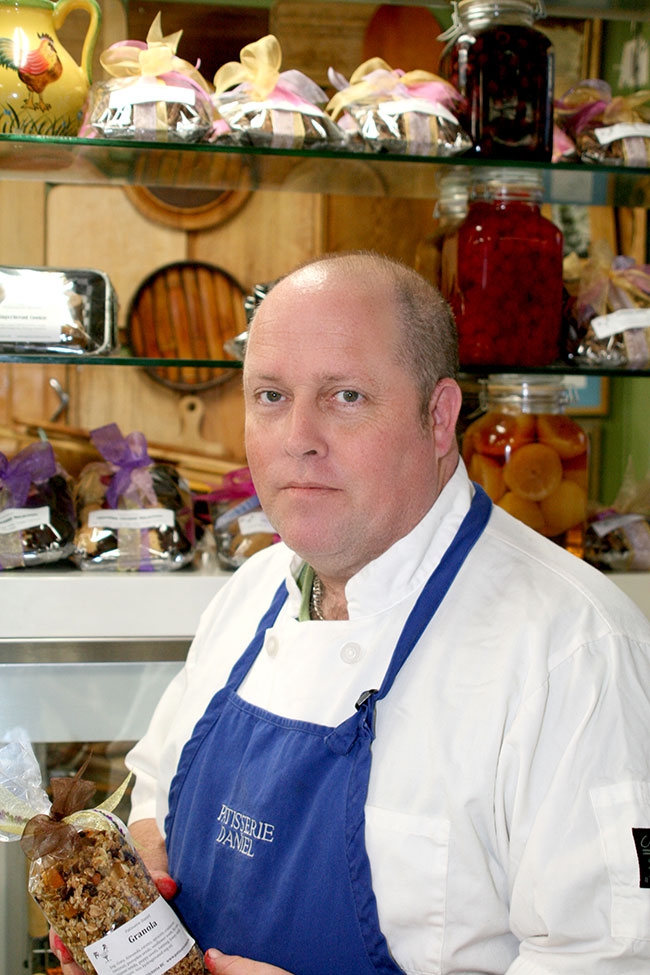 A famous quote by Irish playwright Samuel Beckett goes like this: “Ever tried. Ever failed. No matter. Try again. Fail again. Fail better.”

Late-blooming Swiss tennis star Stan Wawrinka has that quote tattooed on his left forearm, and the phrase has become a battle cry for Silicon Valley upstarts and entrepreneurs in general. But it could easily apply to Daniel Vokey, owner/operator of Victoria, B.C.-based Patisserie Daniel, the winner of Bakers Journal’s inaugural Jake the Baker Award.

The award recognizes and honours business savvy and innovation – two areas in which Vokey excels. Patisserie Daniel beat out more than 20 other Canadian bakeries and won a beautiful award plaque as well as an all-expenses-paid trip for Vokey and his wife, Teresa, to Montreal for Bakery Congress 2015.

Vokey, 50, launched Patisserie Daniel 20 years ago, but not before a few failures along the way.

“When you experience failures in business decisions, they don’t always become failures because you learn something,” he said. “But if you are like an ostrich and ignore your failures, then they become problems.”

Spend a few minutes with Vokey and you’ll immediately notice he’s the quintessential “people person.” He doesn’t strike you as the type of business owner who’s content to lock himself away in the office and concentrate on the books. Instead, he’d prefer to be in the kitchen with his workers and out front with his customers. That’s how you connect, teach and learn – three things that Vokey prioritizes.

In a wide-ranging interview with Bakers Journal, Vokey told us about a few of his failures and struggles, and how his relationships with people always helped him overcome the many challenges he’s faced in his career. Like many entrepreneurs, he’s had to take risks, like operating at a loss from time to time just to keep the doors open and the lights on.

“One year, I was losing $6,000-$7,000 per month just to keep the business open,” he recalled. “I had two businesses; I’d overextended myself; I was selling wholesale; people were owing me money. I didn’t have two cents to rub together.”

Originally from Montreal, Vokey visited Victoria when he was 19 “as a tourist with some of my buddies,” he said. “I thought it was beautiful but I also noticed that there are very few bakeries.”

At the time, Vokey was studying baking and working in a small bakery on St-Denis Street in Montreal, and he saw in Victoria a place to make his mark as a businessman. However, it didn’t happen overnight. In fact, he toiled for a number of years at Murchie’s Tea & Coffee, a Victoria institution that’s been around since 1894. He got the job after “running into Mrs. Murchie on the street,” he said.

It’s that ability to  connect with people that saved Vokey’s business when he was in dire financial straits. A regular customer knew he was having trouble with the bank because of the large amount of outstanding receivables he was carrying on the books. This customer helped Vokey get an appointment with a private banking specialist who helped find a solution for his cash-flow problems. After that, year in and year out, the customer’s wife would order a birthday cake for her husband from Vokey, and he never charged her for his services.

“He believed … and it wasn’t about the money; it was about support,” he says. “I’ve always had a lot of support from people. They come into my life and they stay there. It’s fabulous.”

When Vokey was first opening shop in Victoria, he had to get creative – and his innovation and business savvy shone through like a sunrise.

“It’s not banks who are going to give you money – it’s your customers,” he says. “You might go to your dentist and say, ‘Hey buddy, can you lend me $20,000 over the course of a year at 10 per cent interest?’ I was able to raise somewhere between $225,000 and $250,000 by going to customers in my first year of business … and I needed it because I’d opened two stores with, like, no money. It’s funny because a lot of these people are still my customers dating back to the ‘80s and ‘90s. It was a beautiful thing.”

Vokey told us he had a great time revisiting his youth in Montreal recently, but that he dislikes being away from his bakery because he misses his employees so much. He stays in touch with them via smartphone when he’s away, as you’d expect, but what’s unusual is that they stay in touch with him when they go on vacation.

He enjoys the fresh ideas that each new staff member brings to the bakery, comparing it to a beehive bubbling with activity and innovation. A staff member might be with him for a matter of weeks or years, he says, but he always learns from them – and vice-versa.

“People go and come back and sometimes they bring some new stuff,” he says. “Sometimes you have a foreign bee who comes in. And if you allow only positive things to enter your hive, only good honey is gonna be made from it.

“You have people who go, they travel, they come back. Or they go through their high school years and then they go to university and then they go and do their career. Then they stay customers. Or when you need help, they come in. Then it’s like a guest appearance, you know? For such a casual little space, we have a very high-quality, diverse group of people.”

These days, Patisserie Daniel is simply a retail bakery – and Vokey couldn’t be happier to keep it that way. He’s given up wholesaling so he can concentrate on making fresh, high-quality products that consistently meet his high standards. Anything that isn’t exactly right goes on the day-old shelf, which is really more of a discount shelf, he explained.

“My employees know what’s good and what’s not. If something is too small, they immediately put it on the day-old shelf. It should be called the ‘not perfect shelf.’”

Vokey is a big believer in discounting and is not afraid to mark down products if they need to be moved. “I sometimes make $400-$500 per day from the day-old shelf. That translates into $120,000 per year – that pays my mortgage,” he said. “Bakers think their stuff is too good to be discounted. If it doesn’t sell the first day, they put it right back out at full price.”

An additional benefit to concentrating solely on retail, Vokey said, is the ability to spend time passing on what he’s learned. He values his role as a mentor and teacher – and views it as a responsibility. “I hope bakers will continue to make the effort to teach young people because it’s like magic. I love teaching people.” Also, teaching the next generation of bakers keeps him young, because “ever since I was 16 I’ve been working with 16-year-olds. It reminds me to not take myself too seriously.”

Vokey’s advice for business success is precipitated on a simple principle. “If you don’t ask, you don’t get,” he said. “And it’s not like I was hustling anybody. I was very sincere. Looking back, it might have been naivety, but it’s a big lesson for anyone to learn: it’s your customers who feed you. You can’t forget that.”

Solid ‘Pik’ for Jake the Baker Award runner-up
Joanna Schultz, owner/operator of South Surrey, B.C.-based Pikanik, says she’s “the Susan Lucci of the baking world” in reference to the soap opera star who was nominated for nearly 20 Daytime Emmy Awards before finally winning in 1999.

Schultz and Pikanik might have a penchant for close-but-no-cigar finishes in competitions – including Bakers Journal‘s Innovator of the Year Award in 2013 – but that hasn’t stopped them from making a name for themselves. Schultz, 44, founded Pikanik just three years ago, in 2012, after time away from the baking business as a labour consultant. Pikanik has quickly developed a rabid following thanks to its emphasis on gluten-free, wheat-free, peanut-free, tree-nut-free, dairy-free and soy-free products. It also makes some egg-free products.

Schultz says her daughter inspired her to start the business. “She was diagnosed with gluten and dairy allergies when she was three years old. When I started shopping around for products it was, oh my god, it was just tragic. The options were so awful,” Schultz recalls. “So I just started making my own stuff. I was a baker years and years ago. I left the industry, so I just started playing and developing. I was just always making stuff; I’d bring it to work, to the office. People were like, ‘This is really good, you should be baking this stuff. This is better than what’s out there.’ And I’m like, ‘Yeah yeah, but I’m not gonna like, quit my day job.’”

She did exactly, that, however, and her inspiring story has not gone unnoticed. Schultz, her family and the Pikanik staff were selected to star in a documentary-style commercial that’s part of Secret Deodorant’s “Everyday Fearlessness” campaign, a series that spotlights real women and the challenges of their lives, in particular balancing career and home responsibilities. The first in the series, featuring a firefighter, is on YouTube. Schultz’s spot was scheduled to debut on June 23.

Schultz had her doubts about auditioning for the commercial, but went through with it, anyway, because of the marketing opportunity it represented. “I know, deodorant right?” she muses. “On my application for it I said, ‘I run a bakery and believe me, it’s pretty sweaty.’”

Pikanik’s star continues to rise with the addition of Chopped Canada finalist Hanna Sogo to the staff. The 23-year-old former sous chef, who hails from Surrey, joined the company earlier this year as its manager of culinary innovation.

Sogo nominated Pikanik for the Jake the Baker Award. In her comments, she mentioned that the company is “in negotiations to launch our frozen products and mixes with a national distributor, which will expand our market exponentially.”

Sounds like all that sweat is about to pay off. Bakers Journal thanks and congratulates Pikanik, and wishes Schultz, Sogo and the entire team nothing but the best in their future endeavours.