The inspiring rebirth of a Canadian original 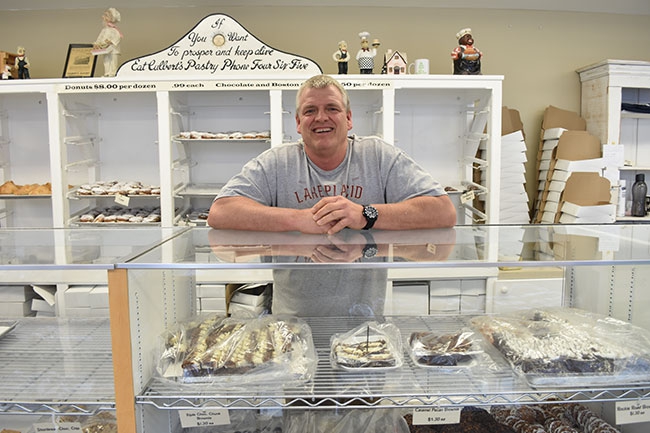 Since before the time of confederation in Canada, the brick oven at Culbert’s Bakery in Goderich, Ont., has been turning out tasty treats to its loyal customers: a mix of tourists and seniors who’ve grown up with the bakery.

Today, Darin Culbert operates what has become an institution in the historic town thanks to the hard work of his family – and their famous cream doughnuts. In 1942 his grandfather, Mel, purchased the business and upon his retirement passed it down to Darin’s father, Barry. Barry continued the tradition and in turn passed the bakery along to Darin.

Darin has worked in the bakery for more than 35 years, having started part-time at age 15. For a time, all three Culberts worked alongside one another in the bustling kitchen. The original brick oven is still hard at work and in tip-top shape, although no longer coal-fired, having been upgraded to gas. The much-loved family recipes are unchanged and continue to draw in customers from all over the province.

During the busy summer months, he has 11 to 12 staff members on board to increase output and meet demand. During the winter, that number drops to four part-time and two full-time staff members. With lengthy lineups and constant demand for mouth-watering goodies being the norm, it’s hard to tell that five years ago the future of Culbert’s Bakery hung in the balance.

In 2011, Goderich was torn apart when an F3 tornado touched down and left a path of destruction, killing one person, injuring 37 and causing close to $130 million in damage. Hundreds of businesses and homes were destroyed – and Culbert’s Bakery did not escape the devastation. “We were shut down for almost a year because of all the damage and all the rebuilding we had to do,” Darin says. “I didn’t know if we would reopen.”

Water damage, broken windows and damage to the roof and siding of the building were immediately obvious. But another concern quickly came to light: the oven. For a concave brick oven that hadn’t ceased working in over 150 years, the threat of the bricks cooling off and caving in was a very real possibility. Fortunately, the pillar of the bakery stood strong, as did its loyal customers who championed its reopening.

“The community support that went on during and especially afterward was overwhelming,” Darin says. “It was really surprising how many people wanted me to reopen because I’d kind of threatened I may not. I was totally blown away by how many people voiced their support for me reopening and our customer base has increased incredibly since that tornado. All in all, some good things do come out of bad things. The day we reopened they were lined up at 6 a.m. around the block and we weren’t opening until 8:30.”

Now that operations are back to normal, Darin is thankful for the strong ties with his community that bolstered the business through such uncertain times. With his daughter, Faith, working by his side and the rest of his children helping out during the summer, Darin says he feels fortunate to continue on the tradition of Culbert’s, creating his customers’ favourite treats that have been passed down for generations. His most popular product by far is Culbert’s cream doughnut, consisting of two halves of a circular “no-hold” doughnut, with the perfect dollop of cream sandwiched in the middle. “In the summertime we go through 700 to 800 dozen a week – we go through 300 dozen on a Saturday alone in the summer. In the winter, it’s around 50 to 100 dozen a day roughly, depending on the weather and how busy it is,” Darin notes.

Next to the famous cream doughnut, the rest of his doughnut varieties are the No. 2 seller in the bakery, followed by currant tea biscuits. Seasonal treats also top the list. During the holidays, Culbert’s turns out classic Christmas cake, Christmas puddings and countless gingerbread and shortbread cookies. In addition to its retail location, the bakery also supplies products to a few small restaurants in the area.

Owning a business that’s as old as Canada itself, Darin has watched trends in the baking industry come and go. One area that’s changed dramatically is bread sales. While Culbert’s offers a traditional selection of bread, including white, brown, rye, multigrain, cheese and raisin, Darin says bread sales that once made up a good part of his business have dropped, which he attributes to ever-increasing supermarkets and greater consumer interest in gluten-free products. “I can’t produce gluten-free here in the bakery, but I bring it in frozen,” he explains.

When it comes to the trend of locally sourced products, he sees customer demand for this ebb and flow in Goderich; however, he’s proud to offer hand-made sausage from a local butcher and jams made by local Mennonites.

To stay current with the latest happenings in the baking industry, Darin often attends supplier trade shows and never misses the Baking Association of Canada’s Bakery Showcase that’s held every other year.

Darin’s recipe for success at Culbert’s is simple: stick to the basics. Tried and true recipes developed by his grandfather and baked in a centuries-old brick oven have been attracting customers for decades and there’s no need to mess with a good thing!