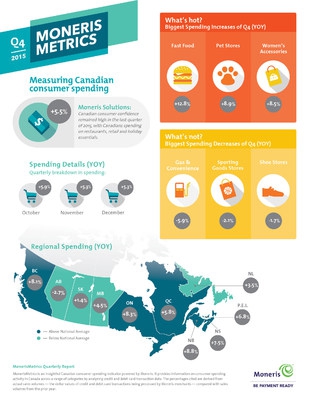 Toronto – Consumer spending in Canada grew by 5.49 per cent in the fourth quarter of 2015 on a year-over-year basis, according to the MonerisMetrics Quarterly Report released by Moneris Solutions. Moneris is one of North America’s largest processors of debit and credit payments.

Growth in the final quarter of the year was consistent with the increases seen in the first three quarters – of 5.78 per cent, 6.08 per cent and 6.68 per cent, respectively – marking 2015 as a year of steady spending growth.

“2015 was a year of positive spending growth with no one quarter showing a slowdown – a great sign for Canadian businesses,” said Angela Brown, president and CEO of Moneris, in a news release. “Given the delicate state of the economy, it remains to be seen how Canadians will choose to spend their money in 2016.”

In comparison to the final three months of 2014, consumer spending across Canada rose by 5.91 per cent in October, 5.32 per cent in November and 5.29 per cent in December. With the exception of Alberta, all provinces posted increases during the quarter. New Brunswick posted the strongest increase (8.76 per cent), followed by Ontario (8.33 per cent). Saskatchewan posted the smallest increase (1.35 per cent).

Spending on credit cards increased by 7.16 per cent and by 2.70 per cent on debit cards, continuing the trend of greater increases in credit card spending seen throughout the year.

Dollars spent on foreign credit cards at Canadian merchants increased by more than double the overall rate of growth over the fourth quarter of 2014. U.S. credit cards accounted for the highest foreign dollar volumes, followed by cards issued from China and the United Kingdom. Spending on all foreign credit cards was up 27.73 per cent year over year on Black Friday, and 23.70 per cent during Boxing Week.

For the second year in a row, December 23rd proved to be the busiest shopping day of the year. Black Friday followed closely behind with only one per cent fewer transactions. In terms of spending volumes, Black Friday beat out December 23rd posting 5.74 per cent more growth.

Spending in Alberta decreased by 2.66 per cent over the fourth quarter of 2014. However, Alberta saw a 14.2 per cent increase on Black Friday and an increase of 2.07 per cent during Boxing Week, suggesting Albertans timed their holiday shopping to take advantage of sale periods.

Spending at specialty retail stores was up 6.34 per cent overall, and within the category, the biggest gains were in pet shops (9.72 per cent), women’s accessories (8.53 per cent) and stationery stores (6.75 per cent). Another category that tends to be popular around the holidays, home electronics, saw a 6.54 per cent increase for the quarter overall, with an 11.74 per cent increase on Black Friday.

While apparel sales were up by only 3.44 per cent overall, women’s clothing saw a significant increase of 8.19 per cent. Spending on men’s apparel increased by only 1.83 per cent over the quarter.

With gas prices lower than they were in the fourth quarter of 2014, spending on gas and convenience was down 5.90 per cent year over year.