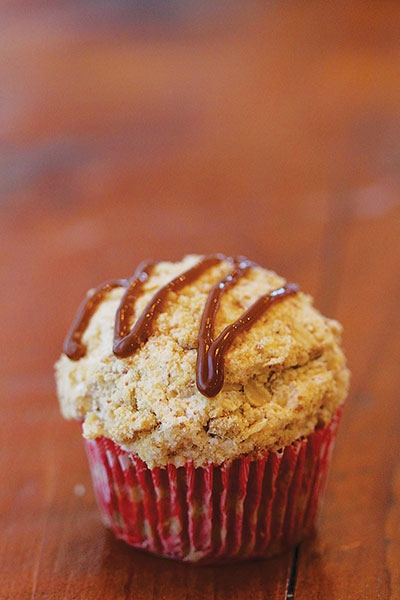 Seasonal foods such as this apple crumble from Kelly’s Bakery often provide a bridge from a fruit-based summer diet to a fat-based winter diet. Photo: Kelly’s Bakery

Baby, it’s cold outside. So, to warm body and spirit, many people turn to familiar comfort foods, whether sweet or savoury. Bakeries in general are well positioned to meet this need. And Canadian bakeries, in particular, know a thing or two about inclement weather.

So how does the Canadian winter affect bakeries and their customers, and what can bakeries do to make the most of their role as purveyors of comfort?

“We are constantly watching the weather. It affects everything we do as a bakery,” says Sharon Landry, co-owner with Doug Huskilson of the Village Harvest Bakery in London, Ont. Bread rises more slowly in the cold weather, says Landry, and people crave carbohydrates.

“I do find if they are forecasting for a storm, definitely you know you’ll have to make an extra batch of bread or cinnamon rolls because everybody’s banking on it being a storm day the next day and everybody’s going to be home that day,” she says, adding that the bakery sometimes does a crumble pie instead of a traditional pie to mark the change of season.

GETTING READY
Hyde says her employees don’t really change routines when the cold weather hits. “You end up guessing what people want and ending up with a lot of leftovers,” she says. They make the same breads – just more of them. They also make more biscuits and cinnamon rolls and change up those flavours with the season.

“We might add a different kind of cheese to the biscuits, mix it up a bit with things like garlic and onions,” says Hyde.

Melanie Monaghan, head baker at Indian Head Bakery in Regina, says she doesn’t change what she does, but plans around the holidays rather than the weather.

Surviving and thriving during hibernation season also means lining the pantry. Hyde keeps in close touch with her frozen fruit suppliers and stocks up on frozen berries and fruit such as strawberries and rhubarb.

Erinn Weatherbie, co-owner of Kelly’s Bake Shop in Burlington, Ont., keeps on hand key ingredients such as pumpkin and sweet potato, and warming spices such as ginger and cinnamon.

Village Harvest’s Landry echoes the demand for pumpkin, saying it’s not always available from their local supplier so they build in a time cushion to make sure they have it available for pies.

Einarson highlights a twist on the usual problem of supply exceeding demand. She says she is careful to stock up on molasses; because she uses it in relatively small quantities, she must buy it in advance at the grocery store before it is scooped up by home bakers.

WHAT CUSTOMERS WANT
People go for biscuits, rolls and casseroles, says Hyde. “Anything with spices sells: pumpkin, apple, fruitcake.” Dedicated promotions such as a chocolate and spice month and a sweet chili and lime month went over big at the bakery last year.

Einarson’s customers ask for heavier, richer items such as custards and bread puddings. Chocolate bark is another seasonal favourite.

KEEPING IT SIMPLE
It seems that when winter hits, demand for comfort foods both savoury and sweet is at its height. And while comfort food means different things to different people, its universal characteristic seems to be simplicity.

Landry equates the idea of comfort food with the process of baking from scratch. “If it’s made from scratch, that in itself is comforting,” she says.

For Einarson, comfort food is made up of ingredients you have on hand such as milk and eggs. “It’s rich food that’s not fancy,” she says. Interestingly, she adds that it’s food you can eat either warm or cold.

A study published in Physiology & Behavior in 2003 breaks down preferences by sex and age. Its findings suggest men find comfort in savoury foods like soups and casseroles while women tend to crave sweet treats like ice cream and chocolate. What’s more, older people tend to enjoy their dose of comfort food in a full meal while younger people prefer it in snack form.

When temperatures drop, it stands to reason we count on food to make us feel warm. “I think it’s a body temperature thing,” says Kathy Maraz, a holistic nutritionist. “It’s cold outside, so we want to feel warm on the inside. We tend to go into hibernation mode.”

“In Ayurvedic medicine (a Hindu system of medicine based on the idea of balance in bodily systems), they classified foods based on what they did to the body, either warming or cooling,” says Maraz. “Warming foods would increase higher thermal levels in the body.”

“When it cools down and gets grey outside, it affects us psychologically but also our vitamin D stores are lower,” she explains. Our body naturally slows its metabolism and we don’t get out as much, she says, and because we are not moving as much we gain weight.

STAYING HEALTHY
During winter, people tend to move away from a largely fruit-based summer diet to fat-based foods.

To help give customers healthier and more satisfying options, Maraz suggests bakers use more relatively healthy fats such as coconut oil to balance trans and saturated fats. People crave sugary foods, and coconut sugar, which is low-glycemic, is a great way to give them more of what they need.

Educating people about, for example, the types of sugar they are eating, is important, she says, but it can be a challenge. “Explaining to people that all fats are not the same is hard to do because we’ve been told that all saturated fats are bad,” says Maraz. “It’s been a misconception.”

She suggests using whole grains, where you can, as a way to cut down on “super-processed” flours. People want to eat what’s good for them, she says. “They are asking for healthier choices, and a lot of them don’t know how to use things like coconut flour and sorghum flour.”

FINDING A BALANCE
Satisfying customers may come down to finding a balance between giving them what they crave and what they need. But how do bakeries communicate this?

Bakeries should think about using two key words – “warm” and “fresh” – in their winter marketing efforts, says Brisebois. Posting tantalizing pictures of your treats on Facebook accompanied by inviting phrases like “fresh out of the oven” is a great way to draw in customers, and timely tweets when baked goods come out of the oven are irresistible, she says.

Try using taglines that have positive associations, she suggests: “Grandma’s food was good, and good for you.” Offer them a treat or a draw prize of muffins for a year.

Brisebois echoes Maraz’s suggestion of offering treats in moderation. One way to do this is by offering mini versions of your products such as mini-muffins or cupcakes.

“Where we lost our way is in portion control,” she says. “All the studies show the most successful people when it comes to losing weight and keeping it off are the ones who cheat. They plan the cheat, and they have it in moderation. Then they don’t feel deprived.”

There are two takeaways here for bakeries: First, giving comfort food a healthy twist by adding a nutritious element such as pumpkin provides customers with added value. Second, bakeries have an important role to play as not just dens of indulgence but also safe havens for the spirit. If you can make a person feel safe and welcome when they walk through your door, you will have gained a loyal customer.