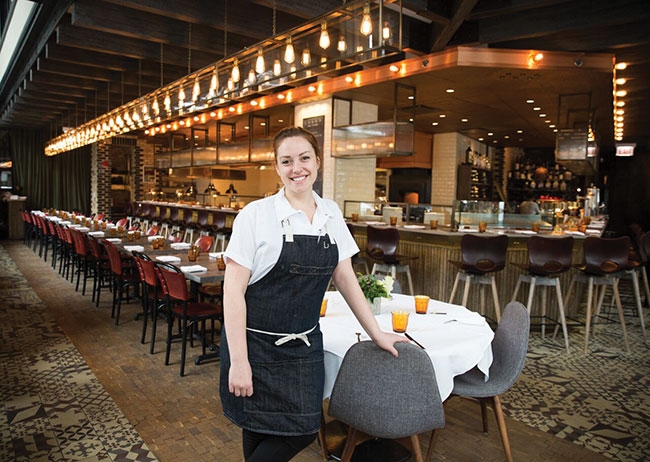 At a time when clients want to treat themselves, yet demand healthy options, Chef Leigh Omilinsky found a way to bridge the two disparate wants. In 2013, she won the Jean Banchet award for Best Pastry Chef, and was included in Zagat’s 30 Under 30 list.

Bakers Journal talks with the award-winning chef to discuss her innovative take on a traditional French pastry. Formerly employed in Chicago’s Nico Osteria, Omilinsky is now pastry chef at the Bellemore restaurant. Omilinsky’s spelt croissants appeal to both traditional pastry lovers and those looking for better-for-you baked goods.

It all started when she was tasked by chef and restaurateur Paul Kahan to “make the best croissants in Chicago.” The added pressure of knowing Kahan would compare hers to the ones made at Tartine was daunting.

“He loves whole grains, he likes to push that, because it’s an interesting flavour. So, I tried whole wheat, I’ve tried rye – I can’t remember what else I’ve tried. I tried a few different other ones, and I worked with Greg Wade, who is the head baker at Publican Quality Breads.”

It was Chef Wade’s suggestion to use spelt flour, and it was then that Chef Omilinsky knew they had a winner. “Sometimes, when you use too many whole grains, it gets almost gummy, because there’s so much protein in there,” she explained. “I wanted it to have the whole grain flavour, but I didn’t want it to get overly ‘healthy-foody’ because it’s clearly not. I wanted it to still be a croissant, and have a more interesting flavour.”

The process was experimental, and the amount of time it took to perfect her formula discouraged her at first. However, she did not stop working on them for a “solid two months,” and Omilinsky’s determination prevailed. In fiddling with the combination of spelt and water, she found the source of her obstacle. As with most successful experiments, the correct formula was the result of an accident.

“I didn’t realize how much longer the grain needed to proof,” Omilinsky shares. “So, the first two weeks worth of attempts, I was proofing the dough for the same amount of time I would have done using white flour – which was a couple of hours – and they were just really, really dense. It was texturally wrong. What honestly happened: I forgot about them in my proofer. I totally forgot about them for four hours and they were great!”

This revelation inspired Omilinsky to try spelt and other whole and ancient grains in other applications aside from croissants. “I’ve made buckwheat gelato, and I’ve made a caraway and rye Kouign-Amann, and it made [working with whole grains] less scary.”

The young chef laughs at her earlier trepidation, and emphasizes the need for experimentation in the kitchen. Anything from time to weather can affect the outcome, so she recommends a looser, less regimented technique in working with the dough.

Leigh Omilinsky’s spelt croissants are a healthier version of Tartine’s more traditional ones.

“If it’s really humid and the weather is warm, I try to control the conditions as best as I can, but that’s not always do-able. If it’s really humid, I’ll use less water, and that’s going to affect the dough a little bit differently. If it’s really hot, it’s everything from where we mix the dough to how long we mix it up, because we don’t want the dough to get super hot,” cautions Omilinsky. “For proofing, it’s all about ‘feel.’ It’s like playing with dirt: you gotta get in there. But, we make them every single day, and we can tell when it’s really, really hot here. We had a wash towel over the dough when the croissants were being mixed and for the resting times between times of lamination, and we just had to watch it.”

Omilinsky is optimistic about the future use of ancient grains in pastry applications. “I think what’s really cool now, is that a lot of the ancient grains and whole grains are becoming more approachable,” she says, referring to Osteria’s organic food source, Spence Farms. “I think that’s super cool, and that bleeds in to pastry as well.”

“I think people are getting more adventurous, and with that comes all sorts of opportunity. There’s a trend of knowing where your food comes from, which I think is fabulous. Knowing the history behind a food gets people excited, and in turn, gets us excited.”

Omilinsky states that pastry and restaurant trends are seeing new application and demand for ‘whole grains and different grains.’ “It’s not just wheat and corn. It’s everything – what can we do with amaranth? With buckwheat? I remember a few years ago, quinoa was the thing, and now it’s like, ‘well, what else can we do?’ Can we use sorghum? Can we use whatever else can we get our hands on?”

Despite her expertise with that ancient grain, spelt is not Omilinksy’s favourite flour to bake with. “I love the flavour of rye. I think it’s somehow nostalgic for me. My grandma used to make rye bread and she used to put pickle juice in her rye bread, so I think that brings me back. She made the best rye bread. I think that depending on which purveyor you get it from and what time of year you buy it, it’s going to taste really different. But I also like the idea of rye and caraway in desserts and pastries. I did a couple of things last year with those things and it was super fun.”

Nostalgia is always a big part of what makes a pastry popular. When pastry-lovers bite into a treat, they want to feel that special rush of memories, and Omilinsky feels she brings that element to her baking. This trend in baking with whole flour is nothing new to her. Treats from the chef’s past influence her choice of ingredients today.

“My mom was very ahead of the health food trend,” laughs Omilinsky. “When I was little, there was no Whole Foods, we had to go to the one health food store. She would put whole grains in her cookies, through cereal. She would crush up Shredded Wheat and Cheerios to try to put some nutritional value into our sweets. That’s something very nostalgic for me. So I say, ‘Do it up!’”