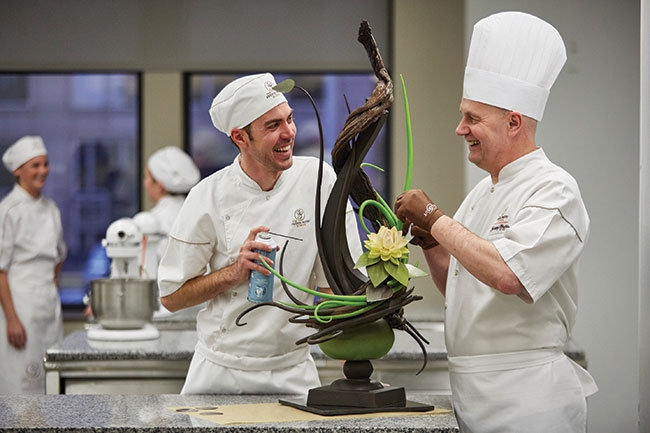 Jacquy Pfeiffer, pastry chef and co-founder of the French Pastry School in Chicago, was more than surprised when he casually received an email from the French Government informing him that he had been awarded the French Legion of Honour.

“I am beyond humbled. It’s the kind of recognition you don’t see coming,” he says. “When I worked abroad, I was always happy to promote food from France. It’s where I’m from. I grew up there. It’s the roots that made me who I am.” He is proud of the traditions of France, the gastronomy and how the people look at life, especially in small villages.

Pfeiffer grew up in Alsace, where his father owned a bakery. As one of four children in the family, his upstairs bedroom was right above the oven. He would awaken to the smell of fresh breads and croissants drifting up every morning. Other childhood memories include the tastes of Mirabelle plum tarts, simple butter cookies and his mother’s onion tarts, the recipe for which is included in his book The Art of French Pastry.

The bakery could not afford to hire help, so the Pfeiffer children were expected to work in the kitchen. “At Christmas, we made hundreds of pounds of gingerbread and others cookies for customers. We thought it was child labour and we all complained about it.” But now he looks back fondly. “It was a good time,” he concludes nostalgically.

One wonders why Pfeiffer did not become a baker like his father, but instead chose a career as a pastry chef.  He explains by saying he wanted to work with a wider variety of ingredients: “You can do anything with chocolate and sugar.” So, at the age of 15, he started his apprenticeship at the famous Jean Claus Patisserie.

Pfeiffer’s pastry chef journey has taken him all over the world working for high end hotel chains such as the Hyatt Regency, Fairmont and Sheraton Hotels. As his skills and knowledge progressed, he was called upon to teach and consult for other companies, including the Ritz-Carleton, Four Seasons Hotels & Resorts and the Atlantis Hotel in Bahamas.

Pfeiffer also had the experience of working for the Saudi Arabian Royal Family and later the Sultan of Brunei. Although everything made for these families was expected to be very lavish, it wasn’t the difficulty of pastry creations, but the enormity of the production that was a challenge.

The Sultan of Brunei hosted parties for 3000 people, every night after sunset, for an entire month during Ramadan, the Islamic holy month where Muslims fast during daylight hours. At the end of the month the Sultan opened his two palaces so 85,000 people could meet him and shake his hand. Each visitor was given a gift box to take home containing three different types of cake slices.

Then, there were off-site events. In particular, Pfeiffer recalls when the Sultan of Brunei hosted an outdoor dinner party for King Hussein of Jordan. A football-field sized space was cleared to set up tables, chairs and all elegant manor of dinner ware. Not only did all the pastry have to be perfect, but it had to be transported safely to the 10,000 guests. Parties such as this proved quite daunting for the small pastry team of nine.

Pfeiffer believes a pastry chef needs to have a calm attitude. “So much can go wrong,” he says. Another important factor is consistency. “It is difficult to make the same thing over and over again,”, while noting a change in ingredients, equipment or workers all affect the end product.

About the long and untraditional hours Pfeiffer says, “As a pastry chef you don’t lead a normal life. During the holidays your family will be celebrating, but you will be working.”  But, the career can be very rewarding. “Being a pastry chef is like running a marathon. You’re in it for the long run. There are so many aspects from cakes and tarts to ice cream, sugar and chocolate. I’ve been doing this for 41 years and I still love it!”

His decision to open The French School of Pastry came from necessity. “When I was first working in Chicago, I could never find enough trained pastry employees. I needed to open the school to fill the gap.” Pfeiffer and co-founder Sébastien Canonne opened the school in 1995.

The school offers a 24-week pastry and baking program, a 16-week cake baking and decorating program, 10 weeks of bread baking or three to five day workshops from beginner to professional. “There are approximately seven jobs for every full-time graduate,” he says.

The students at the school are 85 per cent percent female and 15 per cent males. Within the American industry, Pfeiffer estimates 60 per cent of the pastry chefs are female. So, can he explain why so many of the pastry chefs in French kitchens are male? “They are still very macho there,” he says with a laugh.

Almost 65 per cent of the students enrolled at The French Pastry School are making career transitions. “They are very brave. Not only are they successful, but often are at the top of their field.”

Successful students are the result of good teachers. How does Pfeiffer define this? “A good teacher is someone who can transfer their knowledge. The proof is in the pudding!” exclaims Pfeiffer, using one of the many sweet-centric adages he uses to express himself. “If the students can do it, then they have learned it well.”

As for the main difference between American pastries and their French cousins? “They are sweeter and larger,” Pfeiffer says without hesitation.

The chef does have his favourite French desserts: “Mille feuille, a really simple raspberry tart and any kind of ice cream.”  In fact, he thinks ice cream gets a bad rap. “Ice cream has an average of 12 per cent milk fat, whereas whipped cream, the real kind, has 35 per cent. So, people should go ahead and eat more ice cream!”

As for a North American delight Pfeiffer says, “Muffins. When I first moved to America no one in France was making muffins. And oatmeal cookies – soft on the inside and crunchy on the outside. I also enjoy a good scone.”

Then, of course, there is chocolate, the globally loved sweet. “Milk chocolate already has tons of cocoa in it. It goes well with pecan or a citrus, like orange or lemon.” As for dark chocolate, Pfeiffer likes to add sweetness. He also mentions something pastry chefs can overlook. “The right vanilla gives it a nice round flavour.”

“White chocolate works best with something acidic or bitter like coffee to help cut the sweet,” he states. His favourite pairings include raspberries or passion fruit.

Pfeiffer is obviously passionate about chocolate. He took first place at the National Chocolate Competition, Masters of Chocolate in 1995. Additionally, he won multiple pastry awards as a member of the U.S World Pastry Cup Team. The list of his achievements and accolades is vast.

But, it was probably the 2009 film documentary Kings of Pastry that brought him the most public attention.  The film follows 16 pastry chefs as they challenge the French government’s master exam of craftsmanship called the Meilleurs Ouvriers de France (Best Craftsmen of France) in the category of pâtissier. There was clever advertising:  16 Chefs. 3 Days. 1 Chance.  It helped to create intensity at its finest and audiences were enthralled.

The difficulty of this exam cannot be over stressed. Only the very elite are chosen and they must prove their abilities, along with seventy to eighty other pastry chefs throughout France. Only the top 16 selected move toward the M.O.F.

The theme the year Kings of Pastry was filmed was marriage. The pastry chefs were asked to create a wedding buffet, wedding cake, bride and groom breakfast tray and afternoon tea sweets.  This encompassed: five types of miniature pate choux items; three types of chocolate candies with a showpiece made out of chocolate in which they would be displayed; one type of plated dessert; a large sugar sculpture for the centre of the table; one three-tiered wedding cake; a surprise element that the judges revealed the first day of the event; a wedding breakfast brioche for the newly married couple, with homemade jam and three types of mini afternoon tea items. They were also asked to design a “bijou” item for a showcase and bring it to the event.

The result is a bit of a spoiler alert for anyone that hasn’t seen the film, but, it has to be asked. Will Pfeiffer challenge the M.O.F. again? The definitive answer is, “No. It’s exactly like the Olympics. Everything is put on hold for three years.”

The practice, the recipe development and showpiece designs. Add to this the travel component of transporting everything to France. It’s too much for Pfeiffer who wants to focus on his school and his family.

So, what is Jacquy Pfeiffer’s vision for the future of pastry? “It’s going to get simpler, healthier and back to the basics. But, the classics will never
go away.”