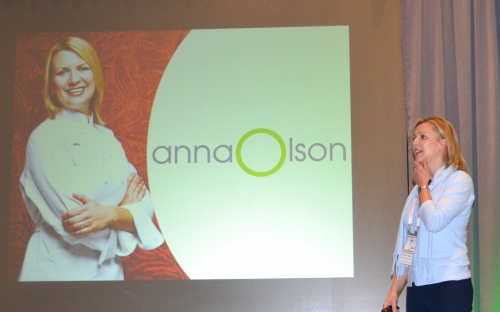 Chef Anna Olson spoke on Monday, April 30 at the Bakery Showcase in Mississauga, On., touching upon a topic that stymies both students and professional bakers alike: How to launch a career in baking when the trends seesaw so wildly?

Satisfying customers is part guesswork, and part confidence in one’s skill. “For many bakers, their first start in baking came from a family member,” reminisced Olson. In Olson’s case, it was her Slovak grandmother who introduced her to baking. Olson shook her head. “I’ve got butter and sugar in my DNA.” Comfort food pulls many would-be bakers into the field, and offering the taste of memories keeps clients coming back.

Baking, as it turned out, was not Olson’s first choice. Her initial career was in banking, which she admits helped her with business plans and the monetary elements of her later baking career, but still caused her some stress. Baking was a way for her to calm her mind, and focus on a problem at hand. Eventually, she came to realize that her kitchen counter was a better fit than her desk job.

In discussing her journey towards becoming an international television baking celebrity, Olson discussed what elements she loved about cooking, and what brought her customers and her family joy. At one point early on in her second career, she found herself back in Ontario, checking out one of the first farm-to-table restaurants.

It was in the verdant Niagara Valley that she knew she felt a connection to the food. She rhapsodized about the Field Warm Tomato Soup, which earned its name because “the tomatoes were still warm from field, out under the sun. We’d just wash them, dump them in the pot with some basil, then whizz it all up and serve.”

Olson notes that part of the popularity of many dishes and restaurants are connected to storytelling. “People are becoming more interested in knowing where their food comes from, rather than the description of the dish,” she observed. Story-telling does have a strong marketing feature, which often helps bakers connect their wares to their customers, by describing an ingredient, the texture, or even its origin. Consider one soup with two potential labels. One, simply called “Tomato and Basil Soup,” and the other one called “Field-Warm Tomato Soup.” Both are the same soup, but one merely describes the ingredients, while the other name paints a picture in the customer’s mind.

In demonstrating the power of story, Olson revealed images featured in one of her upcoming cookbook. “My brand is tied to the honesty of the images. If what I’m making doesn’t look like something a client who buys my book can make it, I’ve lost credibility.” Homemade or rustic are perceived as authentic, as opposed to the too-polished images found in cookbooks a decade ago. “With digital images, you don’t need to fake your food as you used to,” Olson adds, referring to a bygone era of food stylists who’d use shaving cream to mimic whipped cream. “It has to look as good as what they would make at home.”

Olson’s popularity may be on account of how relatable she appears. When people buy her cookbooks or watch her show, they feel that they too, can create a dessert worthy of a professionally trained chef, and for her part, Olson doesn’t attempt too-complicated recipes nor does she talk down to her audience. She hasn’t forgotten her roots as a student or when she was just starting up her company.

Today’s culinary school graduates needs to have close tie to social media. Olson said that photography is the key to getting clients to try something new, or getting folks interested in your brand. However, she did note that clients want more than an Instagram-worthy shot of melting chocolate: Customers may want to know where the chocolate was sourced, where the flour had come from.

Inspiration often comes from international sources for Olson, such as trying desserts from Asia, or fruits from a tropical country to reduce the sugar content of a dish. An exotic ingredient for some may inspire chefs to experiment in putting a new twist to an old favourite, she observed. Olson revealed a lemon-blueberry cake she baked in a bamboo steamer; the steam released the natural sugars in the blueberries, meaning less sugar was needed to sweeten the cake.

For bakers, the challenge always lies in providing wholesome foods such as whole grains and organically sourced food, while also catering to indulgences such as treats made with butter and sugar. The balance may lie in better-for-you treats made with reduced sugar, suggested Olson, knowing that the current trends for sugar-reduced or sugar alternatives are having a moment in the culinary spotlight.

Another trend, she noted, was the awareness around excess plastic packaging. “I was personally offended when I found a pack of individually wrapped prunes. I suppose they are sticky, but what a waste for an otherwise natural product.” Olson noted that many consumers were looking for ways to reduce their footprint, and a rustic offering of a paper bag or napkin instead of a plastic bag or clamshell may be a way for bakers to subtly market themselves as environmentally savvy.

In all, Olson recommended that chefs be true to their skill, but retain an open mind while trying new dishes if only for inspiration.