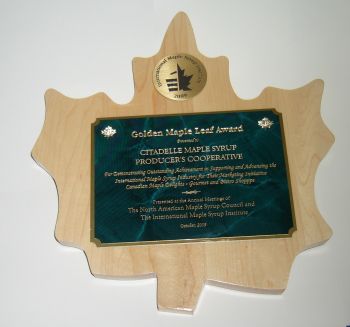 Citadelle is one of the world’s
largest maple processors and an award-winning Canadian cooperative. Several
components showcase why Citadelle was deemed this year’s Golden Maple Leaf recipient
for Maple Promotion and Marketing. This year Citadelle celebrates the 10th
anniversary of its Canadian Maple Delights Bistro and Shoppe. With four bistros
in Canada – in Vancouver, Old Montreal, Montreal Airport and Quebec City – they
offer international visitors distinctive gift ideas, organic and specialty syrups,
vinegars, chocolates, waffles, teas, candies, caramel, gelato, sorbet and a
variety of gourmet products. Nearly half a million people each year visit Canadian
Maple Delights bistros. The Old Montreal and Quebec City locations are also
home to Maple Museums that educate and fascinate tourist visitors. There they
learn about one of Canada’s oldest products (maple), including how sap was
traditionally harvested. Admission is free and includes on-site maple tasting.

Providing
the Canadian Maple Delights Bistro and Shoppes their maple pies, mousses,
cookies and more is a state-of-the-art manufacturing plant. In addition to
supplying the bistros with 100 per cent pure maple syrup and maple sugar products, the
plant also supply Citadelle’s foodservice and industrial markets. By the end of
the year, Citadelle will launch an online Maple Delights boutique including
corporate gifts as well as all boutique products available in the bistros.
Future plans include the franchising of the bistros internationally.